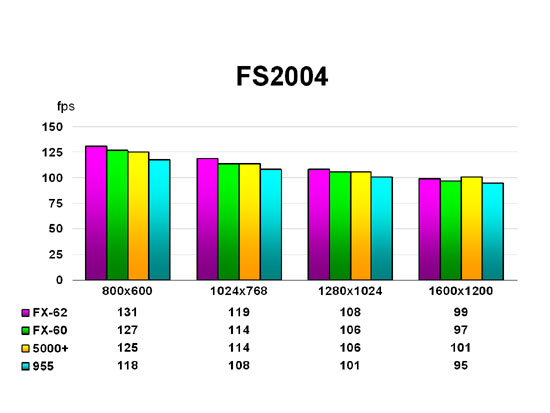 FS2004 testing resulted in a fairly even performance field, with the 5000+ failing to outperform the FX-60 for the first time. The scores show a pattern of being bottlenecked by the graphics board, though, as the resolution scaled upwards, yet the 955 still lost to the Athlon 64s at the lower resolutions.

Chaos Theory was tested using the Lighthouse demo. The shader profile for SM2.0 was used, with parallax mapping and high quality soft shadows both disabled. 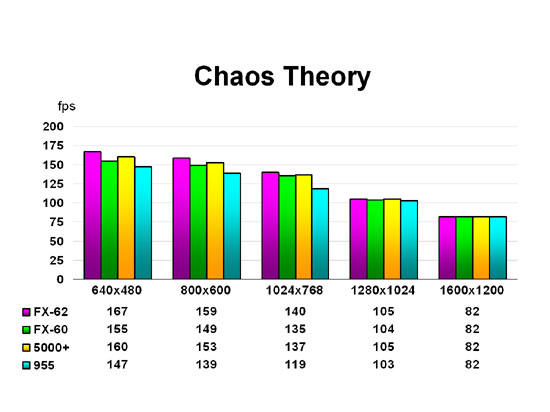 The FX-62 again leads the tested processors, outperforming the 5000+ and FX-60 by roughly 5% and 7% at the lower resolutions, respectively. And yet again, the 955’s game performance falls considerably short of results produced by the tested Athlons. The frame rate, however, levelled out considerably above 1024×768, with the Chaos Theory obviously becoming dependent upon GPU performance at the higher resolutions.

Call of Duty 2 was tested with a custom demo from the Prisoners of War single-player map. The game was configured in its DX9 rendering mode with all texture options manually set at high. And with the 1.0.1 patch, Call of Duty 2 has included multi-processing support. 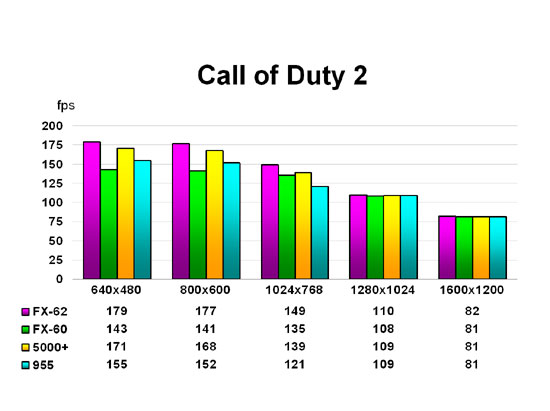 Call of Duty 2 sees the two AM2 CPUs outperforming both the FX-60 and 955 by significant margins, though this is the one set of game tests produced for this article that resulted in the 955 outscoring any of AMD’s processors. It’s safe to assume that the title is somewhat system bandwidth-dependent for higher performance at the lower resolutions since the 5000+ has an identical clock rate as the FX-60 yet only half the L2 cache.