It was bound to happen. At some point, you just snap.

And it came while trying to complete the setup of my daughter’s machine. For some (and it’s a mystery to me) PC hardware knows exactly when you’re planning its demise when it won’t cooperate. And, in that last minute before you go completely postal, it generally decides to suddenly straighten up and fly right after you’ve already put a curse on the bunions of Bill Gates and begun selecting the proper weight of sledgehammer.

Not so this time. This time, it was war.

First, it didn’t want to recognize the CD drive. After unplugging the IDE and molex cables many times, I finally got it to ‘see’ the Windows XP setup disk. After spending roughly the same amount of time it took to fully construct the Pyramids of Giza on reformatting the hard drive to NTFS (that should have tipped me off), I received the first-ever Blue Screen Of Death from Windows XP. I’d seen it many times in the previous months while fussing with my legacy machine running 98SE, but not from this OS. I frowned.

Then, after installing Windows, I brought up the desktop and began installing my daughter’s AutoCAD stuff. I paused for a moment to go fetch a glass of cabernet and returned to a blank, black screen. Nothing. I’d hit the power switch and there would be much whirring and blinking of lights, but no desktop, nothing past the BIOS post from the motherboard. I was perturbed, but pressed onward.

Turned out to be a PSU problem. Specifically, two pounds of dust and dog hair in the PSU was the problem. After blowing this out with an air compressor, I reattached it to the motherboard and tried it again. It worked, but I must have blown something loose in the process (those compressors are stout, aren’t they?) because five minutes later, I smelled the acrid stench of melted metal and torched plastic coming from the back of the computer. I tried a replacement. This worked, but by now, the registry was so befouled, all it could do was say “CANNOT FIND BOOT SECTOR – PRESS ANY KEY TO REBOOT’.

I lost it. And I couldn’t find a sledgehammer, but I found something that would suffice. Hold it, where are my safety goggles?  There they are!  Okay… 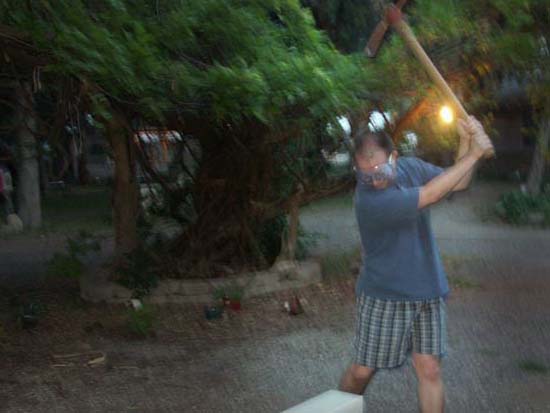 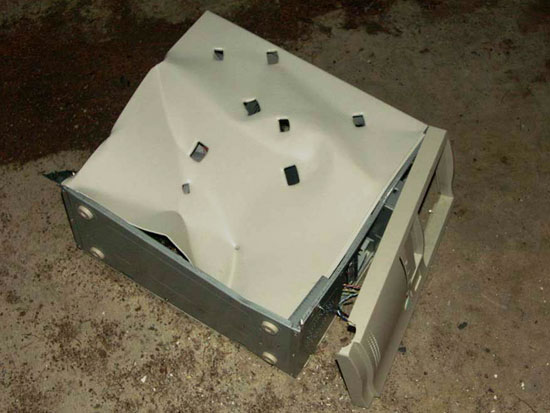 Anyone remember the scene in A Christmas Story, the one where Ralphie loses it and pummels Farkus into a heap?  Remember him talking about speaking in tongues?  My wife wouldn’t tell me exactly what I said, but the trees are stunted.

After I regained my calm, my father-in-law walked up to me and said, “Well, if it won’t start now, it’ll always think it should have.”

OSHA Would Never Have Approved

Actually, my daughter’s machine was fixed by the simple replacement of the PSU and a reformat/reinstall. But haven’t you always wanted to do that?

Anyway, with all the new gear, I needed room. My desk was crowded. My cat no longer had room to crawl behind my monitor and get her whiskers caught in my power supply fan. My two-year-old son was finding it harder and harder to crash my rig because he couldn’t find the power switch or keyboard. Not wanting to put either of them at such a disadvantage, I decided to venture into the wood shop and actually build a set of shelves, knowing full well I could end up here: 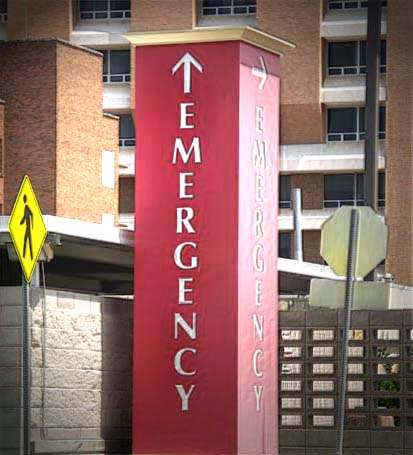 Of course, I always remember the Golden Rule of Carpentry…now, what was it, ‘measure once, cut twice’?  ‘Mark once, lose control of power drill’?  ‘Hire a professional, drink a Shiner Bock’?  I forget.