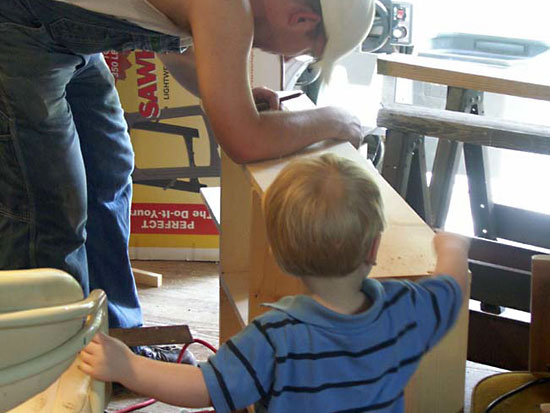 I didn’t want to turn $70 worth of Southern Yellow Pine 1x10s into very stylish kindling. So, I enlisted the help of my father-in-law, who’d actually done some carpentry work. I started first with the base of the shelves. I took two 5-foot sections and bracketed them together to make the main load-bearing platform. It needed two holes for cable management and because I finally wanted to try out my hole saw drill bits. I settled on 1 7/8th-inch holes in order to give myself enough clearance for my VGA cables. I also wanted the older look of brass screws, which in addition to being sinfully expensive, they helped the wood keep its warmth.

I was beginning to realize I probably could have bought an entire desk for the cost and effort I was putting into a set of shelves. But, then I’d have to give up mine. No way. I have what could only be described as a double for the boat anchor of the Queen Mary. It’s an ancient oak desk from the Alma Desk Company of North Carolina. These now retail for about two to three thousand dollars, so it’s easily the most expensive piece of furniture I’ve ever owned. How I got it is even funnier.

It was rescued by my very intelligent father-in-law during the time he was a fish hatchery manager in Hoffman, North Carolina for the US Fish & Wildlife Service. It was declared surplus by the federal government and stored in a barn on the hatchery. He found it, cleaned it up and they told him that if he could find two idiots that could lift it onto a truck, he could take it home to Texas with him when he retired. This thing is immense and was probably designed specifically for the federal government. They needed something that could be used as a bomb shelter.

Back to the shelves. I used more 1x10s for the sides of my hutch/cabinet. More were used for the horizontal shelves. I needed cubbyholes for my Saitek X45, my R220 Wheel and pedals, various and sundry books and my new Xbox 360. These were all screwed in place using 1 ½-inch brass furniture screws. That’s right; these were shelves with a priority. Be strong enough to hold up expensive play-pretties.

Before putting these all in place, I sanded them using both a belt sander and my wife’s Black & Decker Mouse orbital sander (these are a must-own for any woodworker). The trick is to get rid of all the ‘fuzz’ you normally find on yellow pine by treating the flat surfaces to a healthy dose from a belt sander equipped with as fine a grit paper as you can find. Later, you smooth out all the rough spots with the smaller orbital sander. Don’t get too aggressive with the belt sander, though. You can cause more problems than fix. This gives you a nice soft finish to the wood. If you don’t sand, it looks like you bolted a bunch of planking together to hold lawn mower carburetors for the Toro, not something designed for your house. People were going to look at this. They may look at it and question my sanity, but they were going to see it in my house. 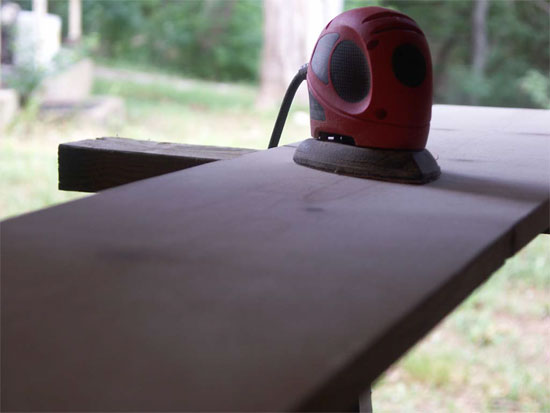