The test system was built using the newest BIOS release and chipset and add-in component drivers.  Anti-aliasing, anisotropic filtering, and vsync were forced off in the graphics control panel during all game testing.  Windows XP Professional (SP2) was loaded and configured to have automatic updates, system restore, and all unnecessary startup services disabled.  And unless otherwise noted the licensed version of Fraps 2.7.3 was used to record performance scores.  Interestingly enough, the default SPD timings of Corsair’s TWIN2X2048-6400C3 DIMMs are 5-5-5-15-2T.  Benchmarking was conducted using the following software:

The two sets of benchmark scores are differentiated in the testing below by listing them as STD (standard) and EPP: the former using the XMS2 memory supplied by AMD for SimHQ’s initial AM2 testing (memory settings were 4-4-4-12-2T), and the latter with the BIOS set to High Performance with Corsair’s TWIN2X2048-6400C3 DIMMs installed (3-3-3-9-2T).  CPU-Z was used to check memory timings.

Pacific Fighters is first up, configured to run in OpenGL mode with all video options set between a mix of high and medium settings and tested using the in-game “F4F vs. G4M” track. 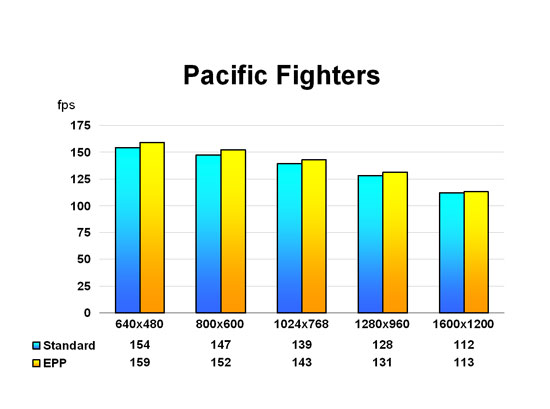 Pacific Fighters sees a marginal performance increase at lower resolutions with the faster DIMMs installed, though the increase is fairly small in all tested resolutions. 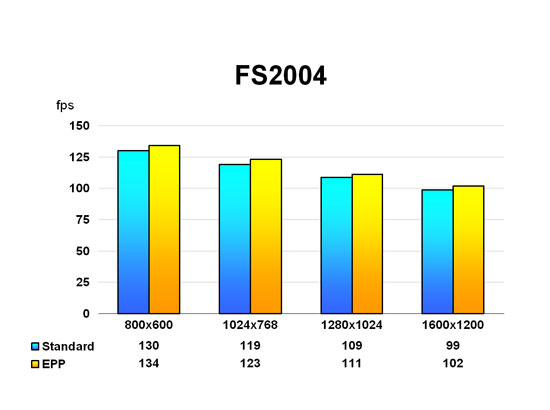 MS2004 likewise sees a few additional frames squeezed out of Corsair’s faster DDR2 memory, though again the difference is rather insignificant and, at certain resolutions, well within the range of test errors.