More than 10 years ago a company named Quickshot released the MasterPilot MFD system, a programmable MFD with 6 buttons per side as well as additional switches in the base. For a time it was very popular for home cockpit builders and desktop flight sim enthusiasts. However, the device required a separate programming cartridge and connected via a PS/2 cable, and with the release of faster hardware and newer operating systems, programming the MasterPilot became an exercise in frustration. Since that time a few diehards have continued to use their MasterPilots, but the rest of us have been waiting for something more modern. That something is the Thrustmaster MFD Cougar Pack, a pair of replica F-16 MFD bezels. 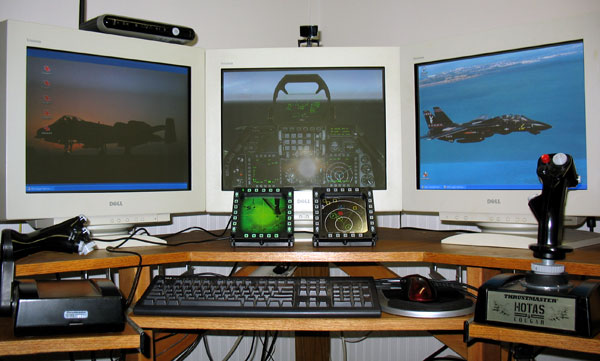 Out-of-the-box installation is simple. The Installation files are provided on a mini-CD; when this is inserted you are led through a brief process that installs the MFD drivers and control panel. Each MFD connects to the computer via its own USB connection. Up to eight MFDs per system are supported. 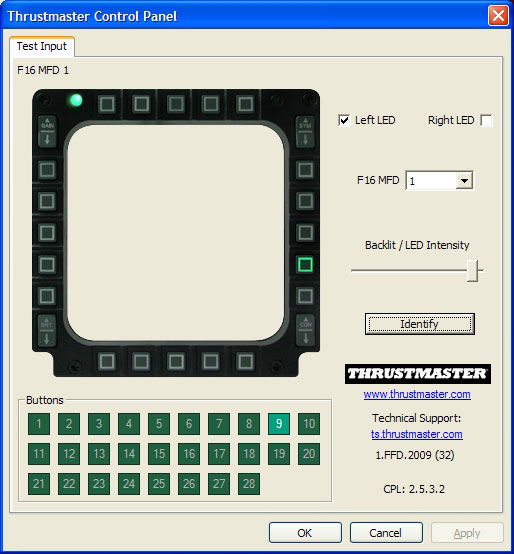 Technically speaking, the pack is two MFD bezels only, as there are no displays inside the bezels. To enhance the aesthetics of the MFDs, a number of laminated paperboard inserts are provided; these slip in from the top of the bezel and fill in the hole where a display would otherwise go. Installed in each plastic bezel are 20 pushbuttons (called OSBs or Option Select Buttons) and 4 rocker switches, for a total of 28 programmable positions per MFD. The MFD dimensions conform to those of the real F-16, making them suitable for installation in to-scale accurately dimensioned home cockpits. 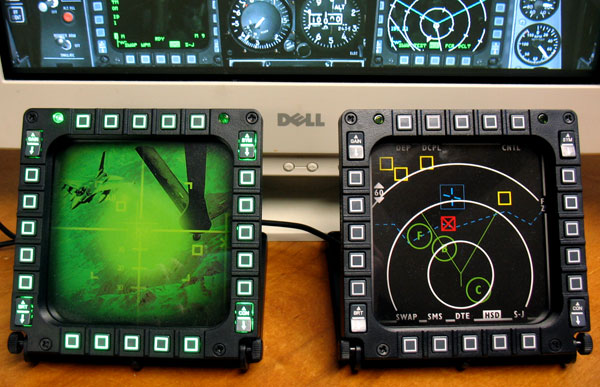 All of the buttons and switches are backlit similar to the green cockpit lighting found on board the F-16’s NVIS (Night Vision Imaging System). The backlighting intensity is adjustable and can be controlled via the MFD control panel with a slider. It is also possible to adjust the backlight intensity on the fly by pressing and holding OSB14 and OSB15 and then either OSB25 (to increase the intensity) or OSB26 (to decrease the intensity). There are also two identification LEDs at the top of each bezel. These LEDs light in various combinations in order to identify which of eight MFDs the specific device is. These can be useful during setup, but are rather bright relative to the rest of the backlighting. We found that these LEDs were distracting, and thankfully the control panel can be used to turn these identification lights off.

Unfortunately, after light use and a few weeks sitting on the shelf, Joe’s right MFD failed to be recognized when connected via any USB port. This problem persisted after multiple reboots and software/driver uninstalling and reinstalling. This is why, in some review images, the backlighting is only active on the left MFD display. 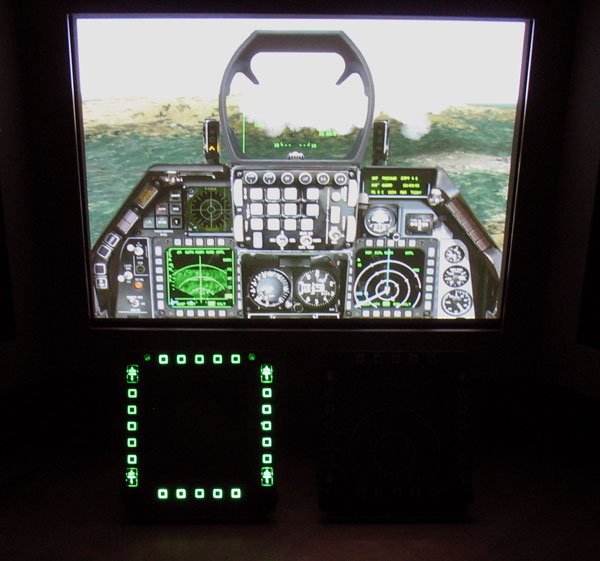 The MFDs come attached to weighted desk stands that can be used on horizontal surfaces to support the MFDs at three different angles. Adjustable plastic arms allow the MFDs to be mounted at 39°, 54° and 72° angles relative to vertical. The desk stands feel sturdy and have grippy rubber feet to prevent the MFDs from moving during use. These work well; we found that the MFDs rarely moved while simming (although in the heat of simulated combat nothing is perfect). However, in the 72° mounting angle the MFDs do have a tendency to rotate up and back from the rear of the stand when buttons near the top of the bezel are pushed. When the MFDs are mounted on the desk stands the USB cable is pinched sharply by the stand. This looks like a potential failure point for these cables; hopefully Thrustmaster has considered this in their design.

The MFDs can also be removed from the desk stands entirely so that they can be mounted on a flat surface. 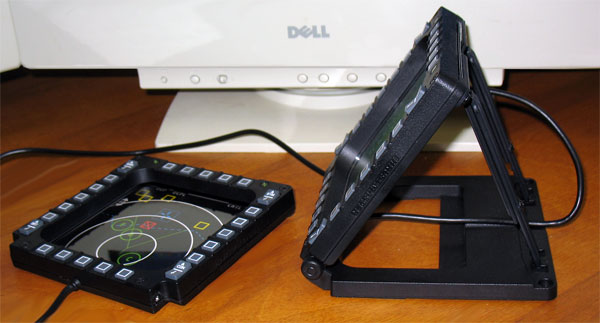