A funny thing happened on Intel’s way to 10 GHz desktop processors: the company failed to arrive even halfway at that goal. Yet without delving too deeply into the bumps Intel’s NetBurst architecture stumbled and stalled over on its road to longer pipelines and higher clock frequencies, the Pentium desktop platform has in recent years cost the company considerable mind- and marketshare as it continued lagging behind AMD’s Athlon™ 64 design. Fortunately for Intel, the company is large enough to weather such a storm and has, after several failed starts, engineered a new architecture — code-named Conroe — that will replace the company’s current parts in the desktop, mobile, and server platforms. Expectations for this new design, branded as Core 2, have become rather high in recent months, fueled by Intel’s own developer forum earlier this spring and innumerable online previews. So this article will briefly discuss the key aspects of this new processor design before diving into what SimHQ’s readers really want to see: the benchmark scores. And not to too heavily foreshadow our test results, but we’ll be upfront at this point by stating that the mounting expectations for Core 2’s performance weren’t just mist and moonshine. Quite frankly, Core 2 represents for Intel its most significant desktop processor launch since the introduction of the P6 ten years ago.

Intel’s review kit for the Core 2 launch included the Core 2 Extreme X6800 and the Core 2 Duo E6700, clocked respectively at 2.93 and 2.67 GHz. Both parts are essentially identical, with the higher clock frequency earning the 2.93 GHz its Extreme marketing title. Both processors have a 1066 front-side bus and sport 64KB of L1 cache per core and 4MB of unified L2 cache. The Core 2s also continue support for features such as Execute Disable Bit and Intel’s virtualization technology and EM64T. And after the space heaters that later Prescott-based Pentium 4s gained a reputation for being, the new Core 2 design, borrowing strongly from Intel’s mobile technology, has a greatly reduced power usage, with a TDP rating of 65W for the E6700 and 75W for the Extreme part. Compared to the 125W TDP of high-end Athlon 64s, Intel’s current marketing mantra of efficiency (honestly rather laughable with NetBurst parts filling the company’s desktop space) now has firm ground upon which to stand. In addition to greatly improved power efficiency, the Core 2 design also boasts higher instruction efficiency per clock (IPC); the 31-stage pipeline found in latter Pentiums has been shortened to 14 stages, which helps account for the reduced clock frequency of the new processors compared to Intel’s Pentium 4s. Also worth noting is that Hyper-Threading, a bailiwick of the Pentium 4 microarchitecture, is no longer present with Core 2 processors.

The Core 2 architecture, however, boasts some interesting new technology worthy of a quick gander. The 4MB of unified L2 cache shared between the two execution cores mentioned earlier is labeled by Intel as Advanced Smart Cache. Which is a way of stating that the two cores dynamically share access and usage of the cache compared to the exclusive caches found in Intel’s previous dual cores. The Core 2 architecture, unlike AMD’s Athlon 64 processors, lacks an integrated memory controller, so this unified L2 cache should help reduce traffic overhead on the memory bus. In addition to Advanced Smart Cache, Core 2 is also sports improved SSE (Streaming SIMD Extensions) performance. In the past, Intel’s desktop processors required two cycles to execute an SSE instruction because of insufficient internal data path sizes; with Core 2, the SSE paths have been doubled, allowing these instructions to be executed in a single cycle. The performance impact of this architectural improvement for applications that make heavy use of SSE instructions should be obvious. Beyond SSE, Core 2 is also able to issue four instructions per clock as compared to only three with the Athlon 64s or older Pentiums, giving the new design higher instruction efficiency and thus enhanced performance. We’ll see shortly below whether or not these improvements offset the reduced clock frequency the new Core 2 processors have compared to Intel’s NetBurst parts.

In addition to the two CPUs included in SimHQ’s review kit, Intel is also launching a full price range of Core 2 processors that range in price from $183 to $999. All Core 2 processors are 775-pin parts, manufactured using Intel’s 65nm process, have 291m transistors, and continue using Intel’s Socket T design; though this isn’t to suggest that the new CPUs will slip onto just any LGA775 motherboard. Core 2 processors require a fairly recent 975X express chipset motherboard due to changes in power requirements of the parts. The Core 2 lineup is as follows:

Looking at the above list, we suspect the E6600 with its 4MB of cache and price point of slightly over $300 could be the most popular choice among the initial Core 2 processors for upgraders. Particularly if the part turns out to be a strong overclocker. All Core 2 processors have 4MB of L2 cache, and are configured at the fab for full or partial (2MB) operations.

Also included in the review kit was a D975XBX desktop motherboard featuring three PCI Express graphics slots; the primary slot provides x16 lanes when used alone, with the lanes being split into a 2×8 configuration for dual-PEG solutions such as NVIDIA’s SLI or ATI’s CrossFire. The remaining third slot is a fixed x4 expansion slot. The 975X-based motherboard also includes Intel’s desktop support for DDR2 667/533, integrated 7.1 surround sound, six PCIe x1 slots, a total of 8 GB of memory, integrated Pro/1000 LAN, and the company’s Matrix Storage (RAID 0, 1, 5, and 10). Intel sent literature on the forthcoming P965 Express chipset (including the ICH8 I/O hub), expected to be the platform of choice for Core 2-based systems, yet home builders will have to wait just a short time longer for the new chipset to arrive on the market. 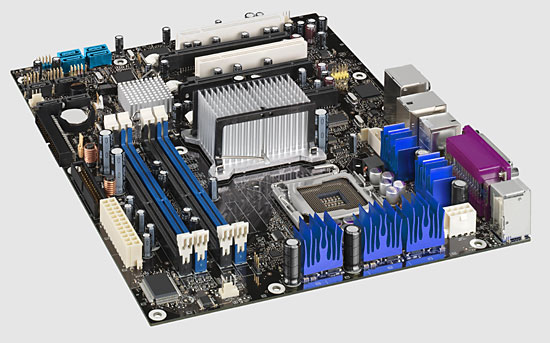 Last, to examine how well Intel’s new Core 2 parts fare against both the competition and the company’s earlier desktop design, SimHQ tested the X6800 and E6700 against AMD’s Athlon 64 FX-62 and the Pentium 955 (3.46 GHz) Extreme Edition. The 955 does not boast the 3.73 GHz clock speed of the 965, yet is used in this article since SimHQ never received a 965 for testing due to the rather limited nature of its launch.