Windows Media Encoder 9 was used for SimHQ’s content creation test. The application is a free download from Microsoft and greatly benefits from systems capable of accelerating its multithreaded design. Falcon 4: Allied Force’s intro movie, a 91 MB AVI file, was converted into a WMV file with high definition video and audio settings and the total time required by each processor to convert the file recorded. Shorter conversion times represent a better sCore 2 for this particular test. 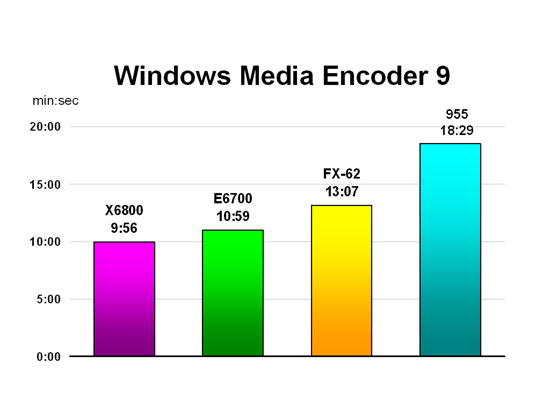 With the application’s use of SSE it comes as no surprise to see Intel’s Core 2 parts perform the file conversion more quickly than the FX-62 or 955. While Intel’s NetBurst part lagged behind the other tested parts by a significant amount of time despite its higher clock frequency, even the FX-62 fell behind the E6700 by 15%. The Core 2 Extreme processor fared even better, shaving another minute off the E6700’s time and beating the FX-62 by over three minutes.

Next up for synthetic testing, Futuremark’s PCMark05 multithreaded tests run multiple processes simultaneously, with Test3 running four separate threads (file compression and encryption, a virus scan, and a memory latency test), making it a more strenuous multitasking scenario. The results shown for each processor is the geometric mean of the separate scores for each test, with a higher number representing a better result. 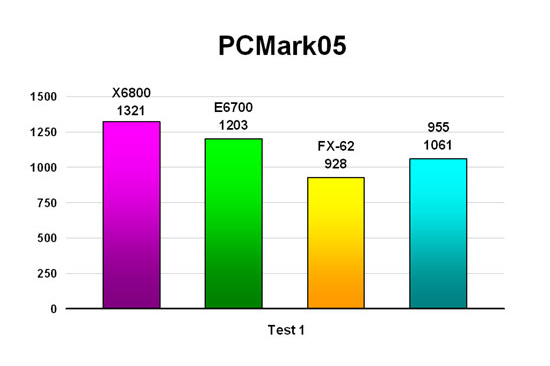 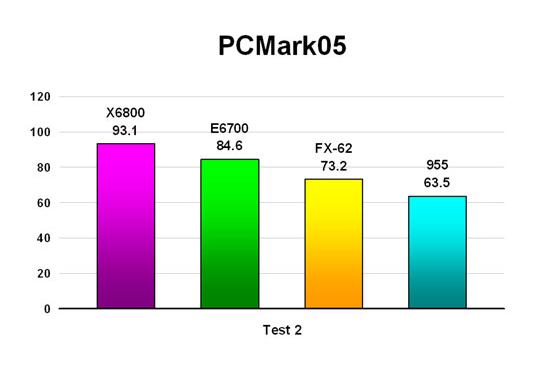 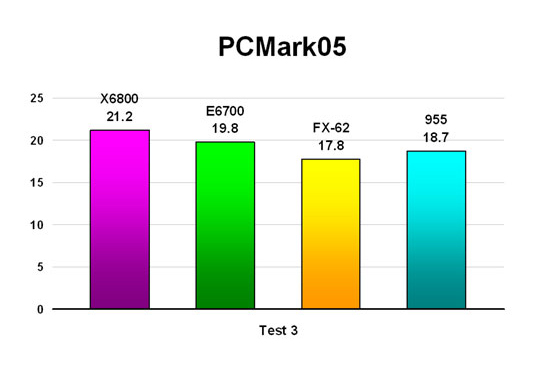 The Core 2 processors outperformed AMD’s best, with the X6800 outscoring the FX-62 by slightly over 25% in the first two tests. And despite the lack of Hyper-Threading in the new Intel processors, the two Core 2 parts pulled a commanding lead in the third test, with even the 955 outscoring the FX-62 by 15%. Intel’s NetBurst-based dual cores last year fell behind AMD’s similar parts in all multitasking tests, so this is a strong reversal for Intel.

In addition to the CPU tests, SimHQ also ran the synthetic suite’s memory tests to see how well the various test systems performed against one another. Each category is comprised of four tests that stress L1 and L2 cache and main memory performance. The following scores are the geometric mean of each category’s four tests. 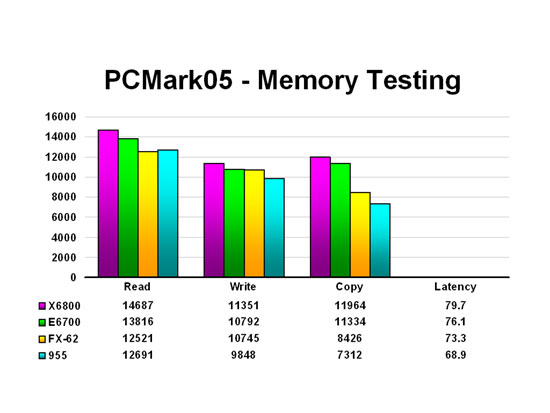 While not individually listed, the 192 KB data block tests use the L2 cache and these tests were key in producing the higher scores for the Core 2 processors. Though having said that, the larger data blocks that use system memory were quite competitive with AMD’s integrated controller. Regardless, the two Core 2 processors outperformed the FX-62 in all four categories, with the 955 coming in an expected last position.

Last, total system power consumption was measured using an Extech power meter supplied by AMD last year during the hot Prescott releases. Two results were generated for each processor, the first representing an idle state of the test machine running the Windows desktop for several minutes, and the second a load scenario created by running the full series of tests for PCMark05. Each score represents average wattage of the entire test system for each test scenario. Bear in mind that both test systems were built using identical hard and optical drives, system memory, graphics and sound cards, and power supply units, so the only variables between the two systems were the motherboard and the processors themselves. Last, the power management features of all test systems were ensured as properly functioning prior to recording the idle state’s power draw (both Core 2 parts run at 1.6 GHz at the desktop, according to CPU-Z). 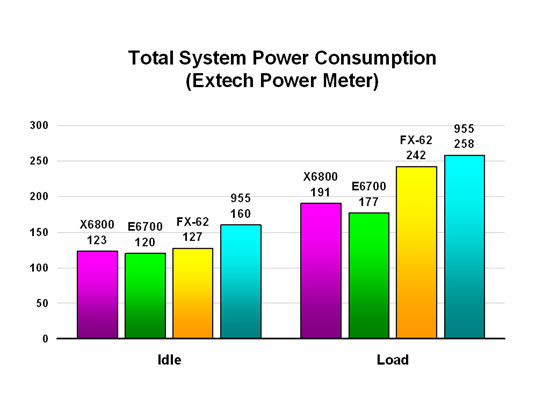 While it’s not too surprising to see the Prescott-based 955 with the highest power usage in both categories, worth noting is that under load the FX-62 isn’t that far behind. In stark contrast, the new Core 2 parts distance themselves by a considerable margin while under load, with the 955 consuming 50% more power compared to the E6700 and the FX-62 burning over 25% more than the X6800. At the desktop, however, the power usage difference is negligible, with power management lowering the clock frequency of the new Core 2 parts down to 1.6 GHz. Intel’s marketing mantra of efficiency truly has legs with Core 2. Though, again, the installed Zalman aftermarket cooler is not a stock HSF, both Core 2 processors idle at a cool mid-30s Celsius at the desktop, allowing the Zalman to run at its lower speed setting. Which results in a very quiet, yet incredibly fast, desktop system.