Call of Duty 2 was tested with a custom demo from the Prisoners of War single-player map. The game was configured in its DX9 rendering mode with all texture options manually set at the highest setting of extra. And since the 1.0.1 patch, Call of Duty 2 has included multi-processing support. 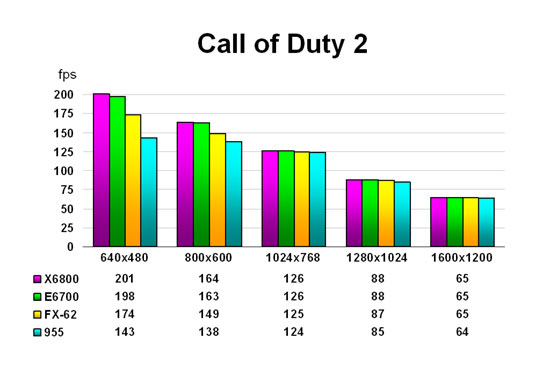 As a first person shooter with a fair smattering of GPU-intensive features supported, Call of Duty 2 testing produced a more plateau-like level of frame rate scores at the resolution of 1024×768 and higher. The two lower resolutions, however, still see the Core 2 processors outperform the FX-62 by 10-15%, which in turn outscored the lagging 955 by a larger margin. And the X6800’s higher clock frequency again failed to differentiate its performance from the E6700, suggesting that the game is more system- than CPU-limited.

After years of watching their NetBurst desktop processors receive a pummeling from AMD’s Athlon 64s, Intel is now positioned to return the favor in spades. The two Core 2 processors tested both outperformed AMD’s fastest desktop processor in every single test conducted for this article, often by margins that still remain rather hard to believe. And no foreseeable clock frequency increase to the current A64 design would enable it to pass Core 2’s performance. Not unless AMD thought a 90nm-based bonfire would appeal to the market more than their upcoming 4×4 solution, and AMD’s transition to a 65nm fabrication process isn’t scheduled to occur until early 2007. AMD is now in a position quite similar to that of Intel prior to Core 2’s launch, which is one of waiting for its next desktop microarchitecture to be completed. The company can only hope to stem its inevitable marketshare losses by slashing prices (rumored to occur this month) and praying that Intel’s supply of Core 2 parts will be unable to match the demand for them. And availability could very well be a problem this fall for Core 2 since Intel itself has stated that the company only expects the new processors to represent somewhere in the vicinity of 25% of its desktop production this winter. 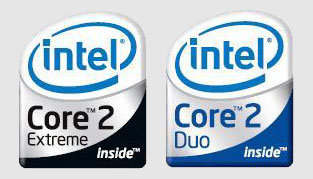 Yet SimHQ is not in the business of reviewing supply and demand issues. How hard a launch Core 2 truly will be this month and how widely available the new processors are with various e-tailers or local computer stores is not something we can, or should, attempt to predict. Looking back at the amazing performance numbers the Core 2 Duo E6700 and Core 2 Extreme X6800 both produced, however, does make it fairly safe to state that demand should be extremely high for these processors. And Intel’s roadmap shows that the company isn’t going to make the mistake it did with NetBurst and expect Core 2 to scale competitively for years into the future (an impossibility considering the design’s shorter pipeline); Intel has already announced plans to release a Core 2-based quad-core part early next year, code-named Kentfield, with a new microarchitecture planned for 2008 as a replacement for Core 2.

If we sound overly bullish on Core 2, it’s simply because these new processors are an amazing combination of performance and efficiency. The greatly reduced power usage results in improved environmental characteristics for systems built with Core 2 processors. Less heat and noise merged with high performance is a winning combination by any standard, and the performance numbers generated by the two Core 2 processors tested for this article set new records throughout all of SimHQ’s benchmark suite. The E6700, placed at the top of the Core 2 Duo lineup in both price ($530) and clock frequency (2.67 GHz), represents in our opinion a better value than the Core 2 Extreme X6800. Priced at almost half of what the Extreme processor is announced to sell for, the E6700’s performance was often within 90% of the X6800’s benchmark scores. And if $530 still sounds like too much to pay for a desktop processor, the other Core 2 Duo parts may fit your wallet size. As we stated in the beginning of this article, Core 2 undeniably represents for Intel its most important desktop processor launch since the P6 architecture. Intel has firmly wrested the desktop performance lead away from AMD and look positioned to maintain this lead for quite some time into the future.