The mainstay of the programmable HOTAS is the user’s ability to say “I want this controller button to send this keystroke or series of keystrokes to my sim.” All of the evaluated HOTAS systems can do this, although they all go about it in slightly different ways using custom software.

All of the HOTAS systems also have three-mode capability, where a toggle or cycle switch is used to place the HOTAS in a certain mode, and the remaining buttons can be programmed to perform different functions in different modes. They also all can utilize a “shift” button, allowing at least six commands per button if desired.

CH Products devices are programmed through software called Control Manager, the latest version of which is v4.51. CH Control Manager is an integrated driver / software set used for all CH programmability and configuration options.

At its simplest, programming the CH Fighterstick and CH Pro Throttle through Control Manger involves defining commands in a command file, which allows those commands to be referenced in descriptive text instead of actual keystrokes. The user then selects these commands from a list and assigns one or more to each button, based on the mode and shift state. Additional programming control is available through a text-based scripting language called CMS (Control Manager Scripting), allowing access to CH devices’ more powerful programming options.

A cycle switch on the joystick or throttle can cycle through three modes. An option also exists to use CMS and have four modes. Programming for each mode is accessed via tabs in Control Manager for each joystick button, allowing the user to click through these quickly to fully understand the overall HOTAS programming. 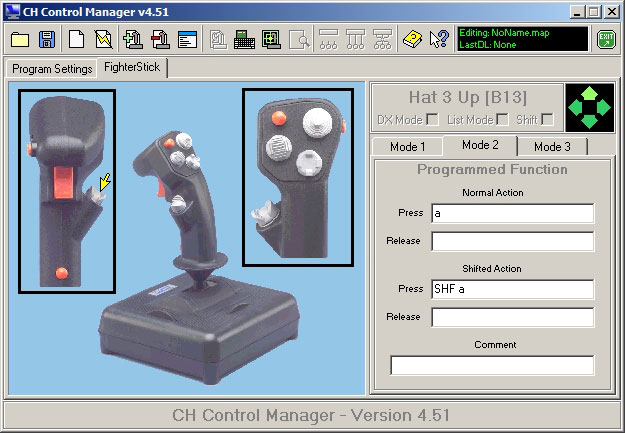 Each Flight System G940 device (joystick, throttle, rudder pedals) gets its own screen in the Logitech Gaming Software, requiring the user to switch devices on-screen in order to complete the programming of all of them. Additionally, the user must toggle the mode of the device that he or she wishes to program, which makes it difficult to see the programming of a certain button across modes.

Unlike any of the other HOTAS programming applications, the Logitech Gaming Software will not start if there are no Logitech controllers connected. This makes it impossible to work on a HOTAS profile when you are away from your HOTAS. Ultimately, v5.09 of the Logitech Gaming Software is only a small modification of older versions of the program that were developed to support much simpler controllers (i.e. wheels and single-mode joysticks). Adapting this program for use with the Flight System G940 introduces a number of limitations. The end of this article will feature a discussion on Logitech software progress, and hopefully in the future Logitech HOTAS software will feature more refined and developed capabilities. 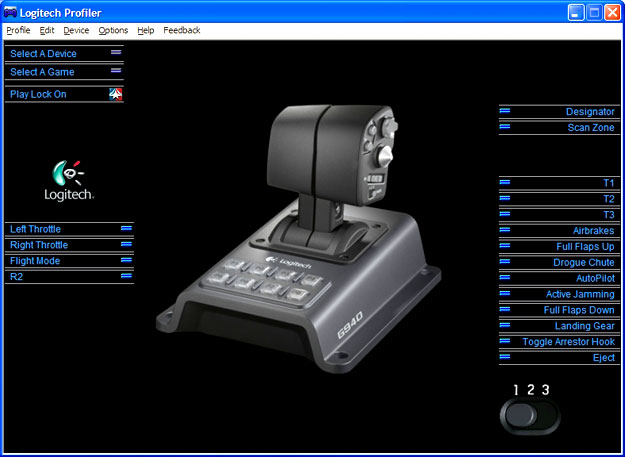 The X-52 Pro Flight is programmed via Saitek SST (Saitek Smart Technology) software, the latest version of which is 6.8.0.52. This is a graphically-based editor similar to the Logitech Gaming Software. The SST software has a “product view” where you can see one of the HOTAS modes plus a picture of the HOTAS where the selected button or switch is highlighted. The SST also has a “grid view” where you can see all three modes plus their respective shift states at once.

SST software is the only programming software of those evaluated that applies a command programmed in unshifted Mode 1 to the other five modes. Although this at times might not be desired, it is a quick and simple matter to delete this programming, and overall it is a significant time saver when building a profile from scratch. 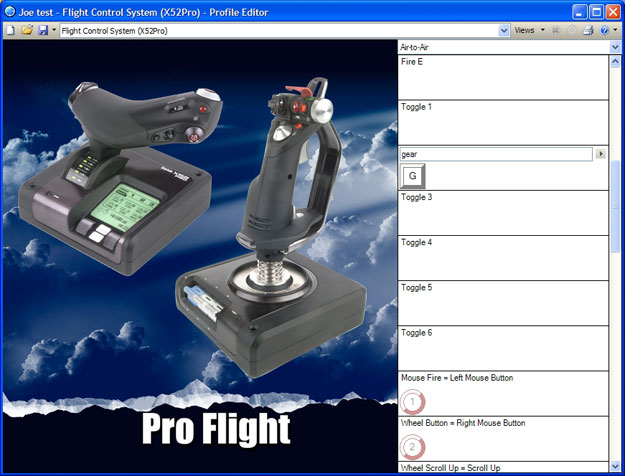 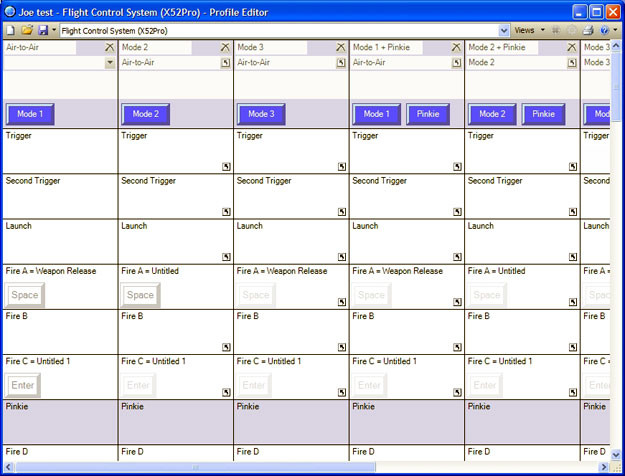 With the recent release of the T.A.R.G.E.T. software (Thrustmaster Advanced pRogramming Graphical EdiTor) that accompanied the release of the HOTAS WARTHOG, users have a choice of how to program a HOTAS Cougar. The “old way” is to use an application called Foxy, the latest version of which is 4.0. At its core, Foxy is a powerful text editor that guides a user through programming theHOTAS Cougar. Foxy code is written on the PC, compiled, and then stored within the Cougar hardware itself. When programmed this way a HOTAS Cougar becomes software-independent; it can, for example, be given programming on one system, then be disconnected from that system, moved to the new system, and the programming will work on the new system.

Users who understand and grasp computer code appreciate text-based programming, because the entire joystick profile is present on a single screen and can be viewed without having to click between different tabs or windows. However, text-based joystick programming can be daunting and/or confusing to others.

Foxy is integrated with a number of other applications that can help to ease the complexity of text-based joystick profiles, such as simple keymapper utilities and mouse programming utilities. T.A.R.G.E.T. offers the GUI mode or the scripting mode so that it is less daunting and more flexible to everyone, which is the best of both worlds. The T.A.R.G.E.T. GUI can also be used to set up simple programming, then generate a script from the GUI and continue in the scripting language with more advanced programming.

Very similar to the CH Products command file, Foxy uses a macro file in which game commands are referenced in descriptive text instead of actual keystrokes. Then the joystick profile is created by using the macros defined in the macro file. Foxy color-codes and auto-indents the profile for ease of reading. 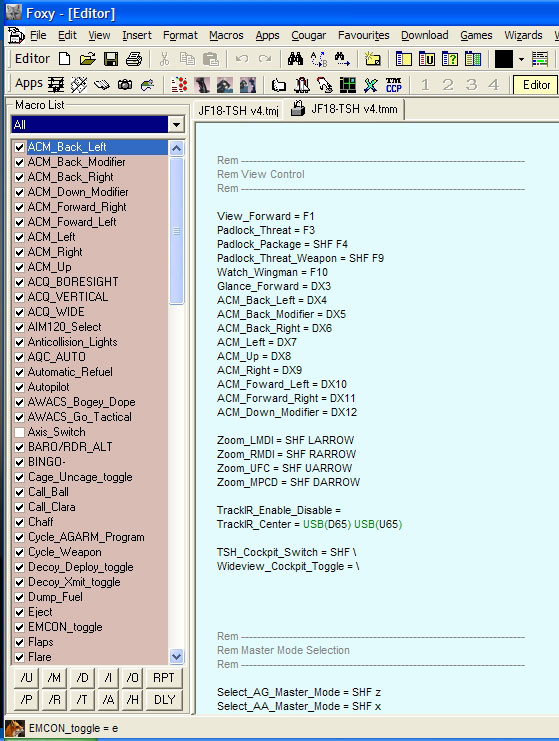 T.A.R.G.E.T. also uses a macro file. While the syntax and the auto-coloring of the macro file is different than it is in Foxy, it functions in the same way. 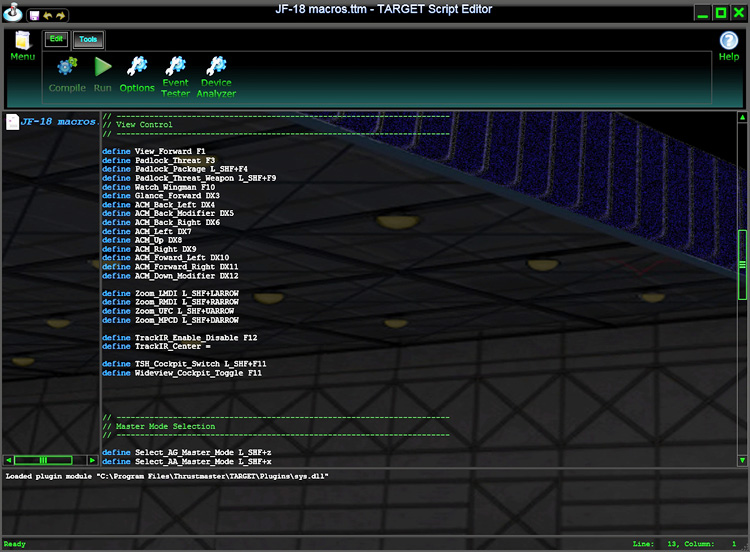 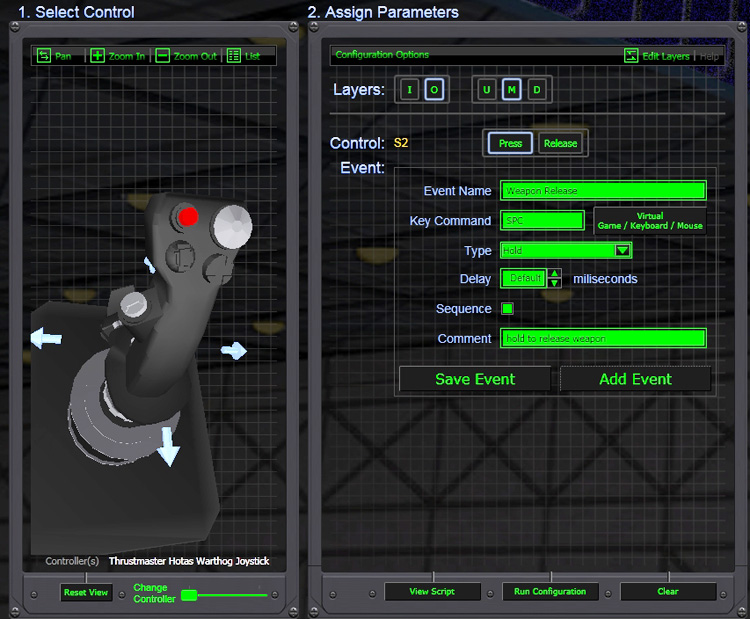