Proper control over HOTAS axes allows the user to adjust the HOTAS response to the sim pilot’s liking. Control over axis elements such as deadzones and linearity is critical to proper HOTAS response.

The Flight System G940 user has control over the “sensitivity” (linearity), center deadzone, and “range” of the Flight System G940 axes. Anything less than 100% range compresses 100% of the electrical axis response into less than 100% of the physical axis travel. Since the centerpoint of this compression is not adjustable, the compressions is always centered at the axis midpoint, making it less than ideal if one wishes to use it for manipulation of the throttle or toe brake response. There is no provision for coordinating the throttle’s response with the throttle detent positions, making the detents as troublesome as they are useful. None of the Flight System G940 axis manipulations can be performed on-the-fly. 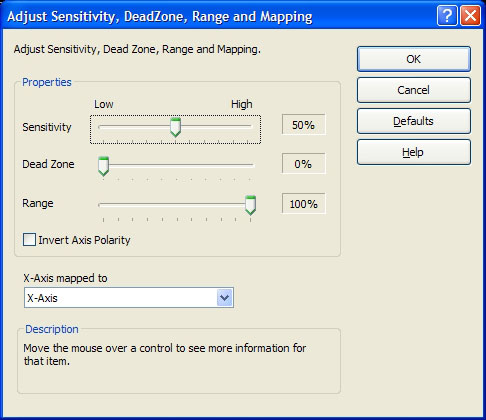 All X-52 Pro Flight axes have adjustable deadbands. These can be adjusted around the center as well as the bottom and top of the axes. The available adjustments are tailored to axes with a physical centerpoint, and thus all of the adjustments are not appropriate for the throttle axis. Linearity and physical-vs.-electrical response cannot be adjusted for any axis, which is especially important for tailoring throttle response at the detents. All adjustments are made via SST software. 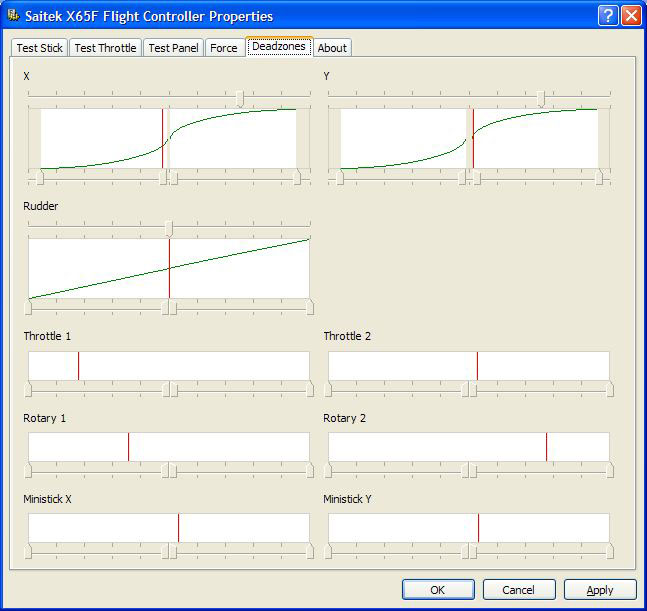 The X-65F force response settings can also be set to custom values. While these adjustments are important to have, they are made in the Windows Control Panel and are not settings that are saved with the controller profile. Thus the user must manually adjust these values any time he or she desires any of the four force settings be changed. 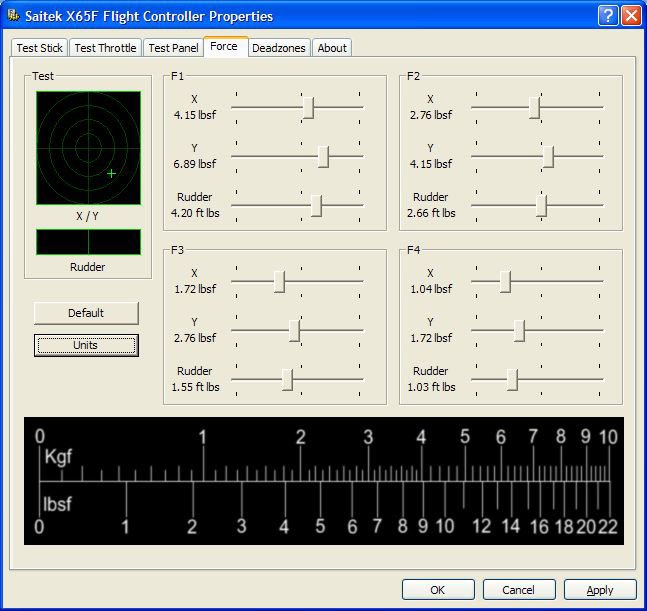 The HOTAS Cougar allows shaping of all elements of any HOTAS axis through simple graphical controls. The center deadzone can be adjusted, as can the upper and lower deadzones (independently of each other). The axis response can be offset from zero if desired, and the axis “curve” (linearity) can be modified (either from center or from the bottom) as well. All of these manipulations can be stored in a HOTAS profile or can be modified on-the-fly through proper Foxy / T.A.R.G.E.T. programming. Foxy also includes the capability of compressing the throttle’s electrical response into less than 100% of the throttle axis’ physical travel, and a handy utility exists to facilitate this process. Offsetting and compressing the throttle range, so that it responds from the idle detent to the full power position, leaves the travel below the idle detent non-responsive and available for programming of wheel brakes or speed brakes. Without this electrical compression, response in low-power situations (such as landing) can result in the user constantly having to bump the throttle above and below the idle detent, which can be very annoying. 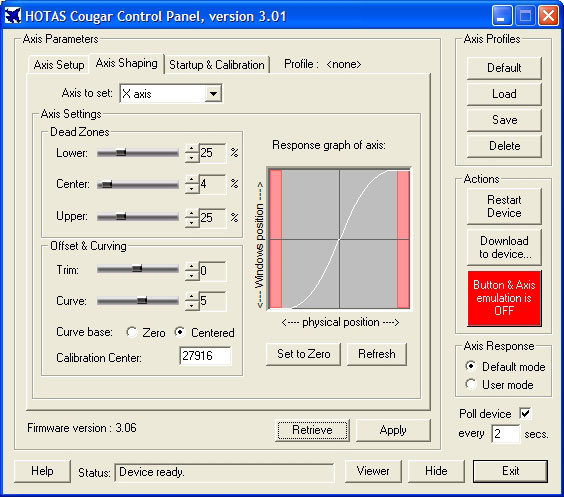 With T.A.R.G.E.T. the HOTAS WARTHOG axes are by far the easiest to manipulate out of any of the serious HOTAS systems. T.A.R.G.E.T. offers separate parameters for “S Curves” and “J Curves”. S Curves are for mechanically-centered axes, such a joystick axes, radar slew axes, and rudder. J Curves are for axes with adjustments relative to the end of that axis, such as throttle axes and toe brakes.

Parameters for S Curves comprise lower/center/upper deadzones, zoom (percentage of full electrical response), and curve (linearity). The zoom either reduces the overall response of the axis (negative values) or compresses it into less than 100% of the physical travel (positive values). The former is good for reducing the sensitivity of difficult-to-control axes such as the radar slew cursors, while the latter could be useful for those wishing to design a stick extension handle. 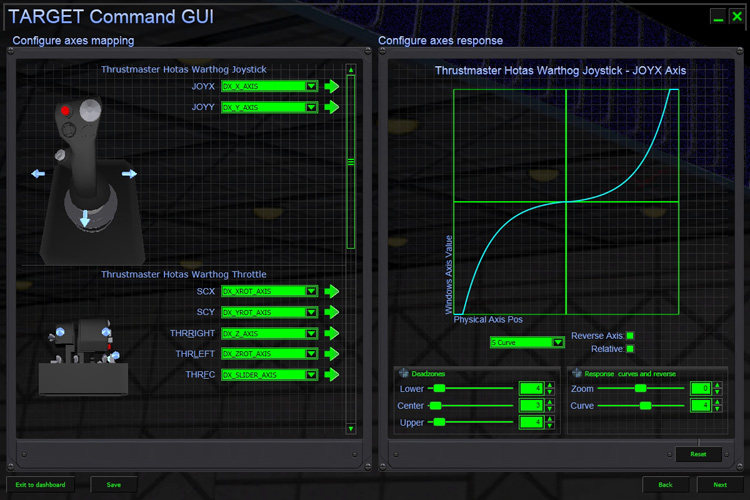 Parameters for J Curves comprise the control position and the value of the axis at that position (linearity). The J Curve settings are most useful for tailoring throttle response to a specific application. For example, in DCS sims the afterburner is triggered at 95% of throttle response. The WARTHOG throttle hits the afterburner detent at 80% of its travel. Therefore the manual suggests setting the J Curve options to a “Control position” of 80 and a “Value of axis” of 95. This means that the throttle response is altered so that the throttle gives 95% of its electrical output after it has traveled 80% of its physical distance. Similar settings with adjusted values could be used for other sims, and J curve settings could also be used to change the linearity of toe brake response. 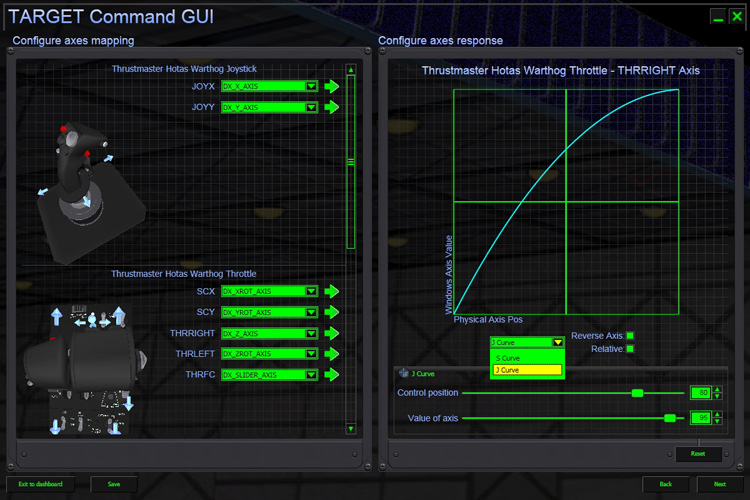 TARGET also offers “Reverse Axis” and “Relative” options for axes. Reverse axis simply reverses the direction of an axis. The Relative option takes an axis out of its normal absolute operation, where by default the value sent to DirectX directly reflects the axis position. The Relative option is designed for the HOTAS WARTHOG’s radar slew axes; if these are programmed in a sim to control radar cursor position, in most sims the cursor will snap back to center when the control is released. This undesired behavior can be eliminated in sims such as LOMAC and its add-on Flaming Cliffs (not FC2), where the behavior of the TDC will be correct with Relative operation. T.A.R.G.E.T. is the only programming software to offer such a simple and effortless way of taming ministick / microstick / slew controls.