Call of Duty 2 was tested with a custom demo from the Prisoners of War single-player map. The game was configured in its DX9 rendering mode with all texture options manually set at the highest setting of Extra. Since the 1.1 patch, Call of Duty 2 has included multi-processing support. 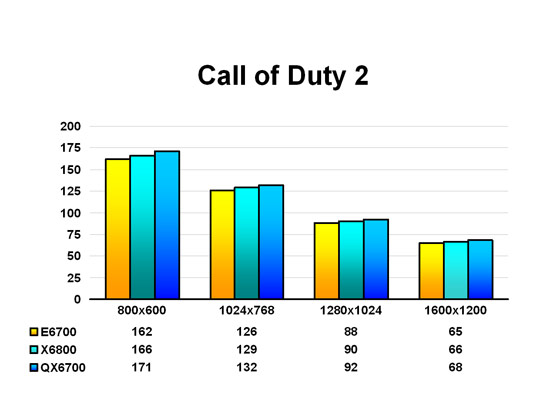 The QX6700 pulled out the slightest of leads across the four tested resolutions, outscoring even the X6800 despite its higher clock speed. The performance delta, however, was extremely small, so much so that the quad-core was run against the recorded demo several times to help ensure accurate testing and confirm the results. The scores were repeatable, however, supporting the developer’s claim to have optimized Call of Duty 2 for SMP operations in the 1.1 patch released last winter.

Total system power consumption was measured using an Extech power meter supplied by AMD last year during the hot Prescott releases. Two results were generated for each processor, the first representing an idle state of the test machine running the Windows desktop for several minutes, and the second a load scenario created by running PCMark05’s CPU suite. Each score represents average wattage of the entire test system (minus the display) for each test scenario. Bear in mind that the test system used identical hard and optical drives, system memory, graphics and sound cards, and power supply unit, so the only variable was the processors themselves. Last, power management was ensured as properly functioning prior to recording the idle state’s power draw (both Core 2 Duo parts run at 1.6 GHz at the desktop, according to CPU-Z). 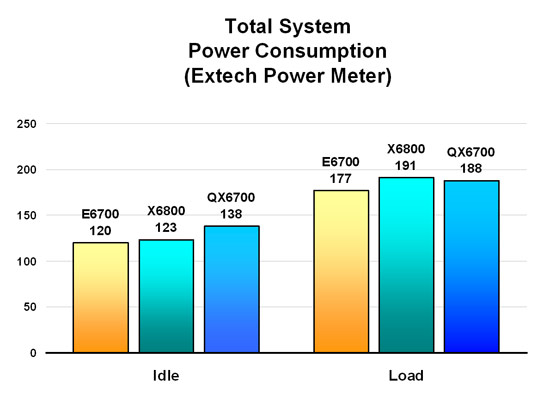 The three processors displayed fairly close power usage in both areas, largely because as noted above QX6700’s additional cores are not always running at full speed. Worth noting is that the quad core spiked to 244 watts during one of PCMark05’s CPU tests than runs four separate tasks, resulting in a slightly higher load consumption than the E6700. 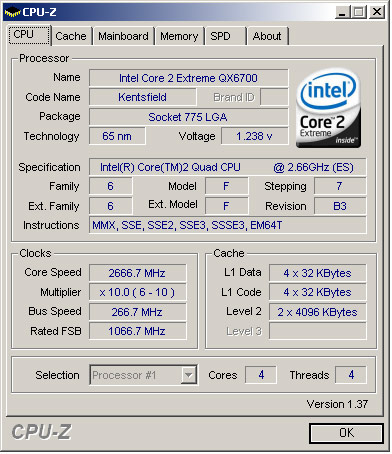 Based on our testing, Intel’s Core 2 Extreme QX6700 quad-core processor is something of a mixed bag. The games used, some of them new titles, showed little if any performance advantage from the QX6700’s additional cores. Call of Duty 2, though, did indeed break this mold and allowed the quad-core part to outperform the dual-core X6800 and its higher clock speed. Yet while promising, Call of Duty 2 was an anomaly for us, game-wise, and we have to acknowledge that it’s likely to take many months, if not years, for game developers to begin truly taking advantage of multi-core processors. As with new generations of graphics boards, the developers need time to wrap their heads around and learn to properly support new technology, particularly when they have for years been accustomed to designing their game engines to run on one main thread.

Our synthetic testing, however, painted a somewhat different, more optimistic picture, with Futuremark’s two synthetic suites displaying strong gains for the QX6700 over Intel’s Core 2 Duo parts, particularly 3DMark06’s two CPU tests. Productivity applications designed for multi-core environments, such as certain video editing packages, should shine on Intel’s quad core. Home users of such applications might want to start saving their pennies for a QX6700, especially since Intel will have months and months of market lead over AMD’s forthcoming quad-core Barcelona part. Whether or not the QX6700 will outperform AMD’s 4×4 platform, however, depends on how well the latter scales in performance.

Intel’s Core 2 Extreme QX6700 will cost over $1,000 once it hits the market. This pricing has become very standard for Intel’s Extreme edition processors, and as noted above the quad core will coexist with Intel’s dual-core Extreme part, the X6800, for the immediate future. Better yet, though, is that Intel has mentioned mainstream quad cores arriving in 2007, taking the PC landscape from single-core CPUs just two years ago to an industry that will see quad-core processors available within the midrange price space early next year. We only hope game developers will be able to keep pace.