Pacific Fighters was configured to run in OpenGL mode with all video options set between a mix of high and medium settings and tested using the in-game “F4F vs. G4M” recording. 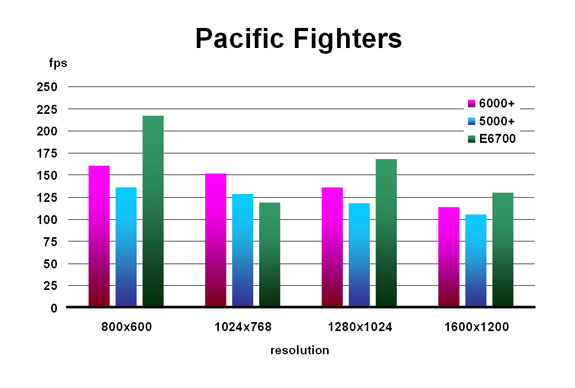 As noted in SimHQ’s initial Core 2 Duo coverage last summer, Pacific Fighters most likely makes heavy use of SSE instructions to explain the performance delta it exhibits (Intel’s Core 2 Duo CPUs can execute SSE instructions in a single cycle compared to older architectures requiring two cycles). While the new 6000+ outperforms AMD’s older part by a noteworthy margin at the lower resolutions, the Intel CPU still scores roughly 30% higher at 800×600 and 1024×768. Yet even at the highest tested resolution the E6700 still leads the 6000+ by over 10%, and the 5000+ by 25%. It’ll be interesting to see whether or not Maddox Games’ next simulation will generate similar results when released (hopefully) later this year.

Microsoft’s Flight Simulator X (FSX), shown last fall by SimHQ to be incredibly CPU-bound in its performance, was configured with high settings enabled across its options categories, with the max texture slider set at full. SimHQ’s testing consists of a short day flight over Rio De Janeiro flying an AirCreation Trike Ultralight at approximately 6,000 feet. 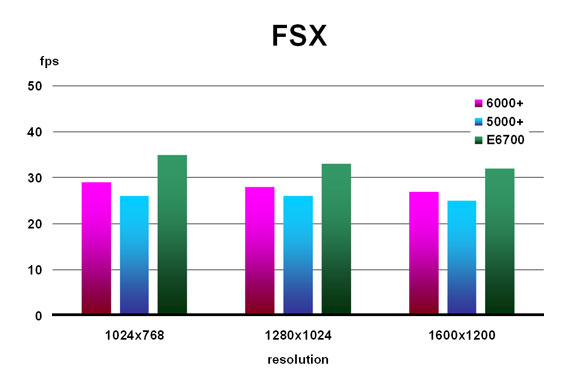 Not surprisingly, all three CPUs produce fairly low frame rates in FSX tested with high settings enabled. The Intel part, however, still outscores the 6000+ by 20% across the tested resolutions, and the 5000+ by 30% at 1024×768 and 25% at 1600×1200. Hopefully the forthcoming DX10 update for FSX also includes some serious optimizations for multi-core CPUs.

rFactor was tested with a custom demo recorded on the Lienz “Festival of Speed” track. The DX9 shader profile was selected for all tests and the “+fullproc” switch used in the command line. 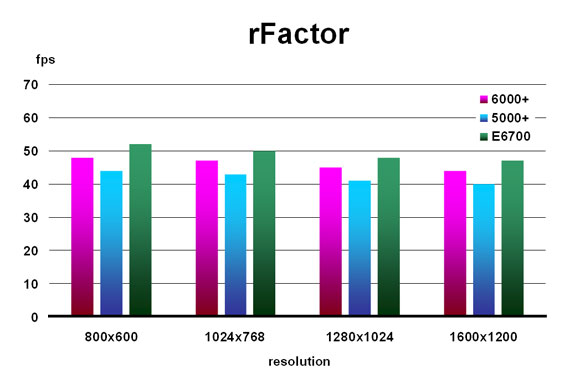 The X2 6000+ runs rFactor at roughly 90% of the frame rate that the Intel CPU produces, with the 5000+ trailing behind the E6700 by a solid 20%. rFactor loses very little frame rate with resolution scaling, indicating that the title is fairly CPU-bound in its performance.