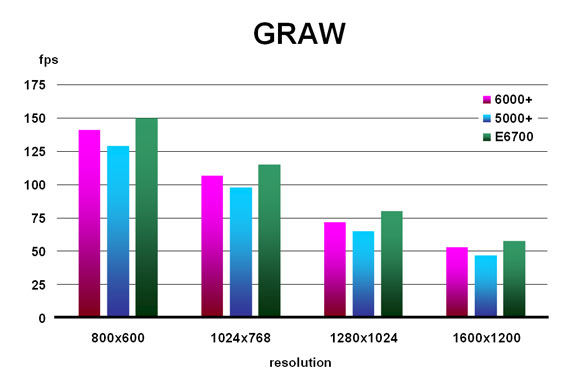 The 6000+ fares fairly well against the Core 2 CPU in this particular game, trailing behind by single-digit differences, and is another example of the new AM2 processor’s increased frequency exhibiting a marked performance improvement over the older X2 part. The 5000+ again produces considerably lower scores across the tested resolutions, falling behind the E6700 by over 20% even at 1600×1200.

A Company of Heroes (CoH) , the latest game from Relic Entertainment, is a landmark RTS with great visuals thanks to its use of cutting-edge graphics effects such as HDR. It was tested with high settings and its in-game performance test used to generate the benchmark scores below. 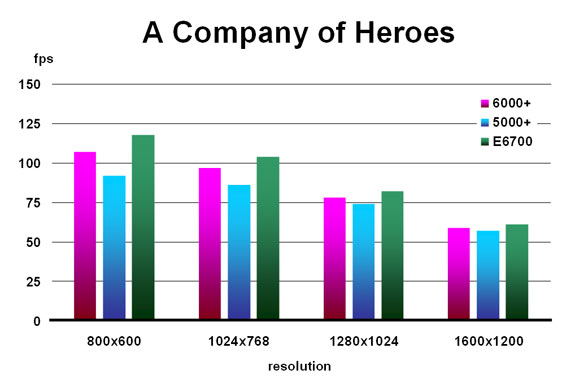 While this RTS sees the frame rate difference between the three tested CPUs plateau at the higher resolutions, Intel’s part yet again outperforms the two AMD X2s by a statistically significant margin at the lower resolutions. The 6000+ falls behind by 10% and the 5000+ by roughly 25% at 800×600. It’s worth pointing out, though, how well the 6000+, and its 400MHz higher clock speed, outscores the slower 5000+.

Futuremark’s PCMark05 multithreaded CPU tests run run multiple processes simultaneously, with Test3 running four separate threads (file compression and encryption, a virus scan, and a memory latency test), making it a good multitasking scenario. In addition, PCMark05’s memory tests were also used to evaluate on board cache and main memory performance. The recorded score for each processor is the combined result of the suite’s CPU and memory tests. 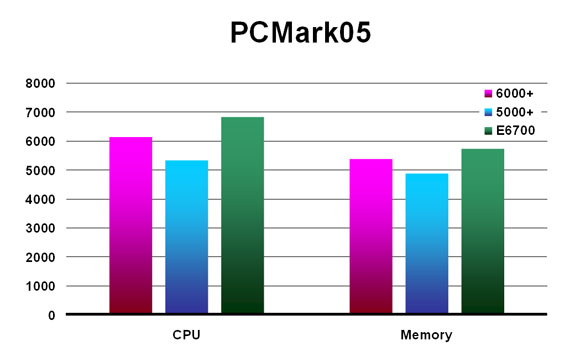 The X2 5000+ gives up quite a bit of memory performance due to AMD’s use of fixed dividers for their CPUs (200MHz, the reference clock rate, and multiplier of 13 equals 2.6GHz, the X2 5000+’s clock speed, which is then divided by 7 for a memory speed of 371MHz). Yet even the 6000+ and its integrated memory controller lag behind Intel’s Core 2 Duo, largely because of faster results produced by the shared 4MB L2 cache found in the Core 2 CPUs. The combined CPU score also sees the Intel processor outscoring both of the X2 parts, with the 6000+ falling roughly in the middle.