3DMark06’s two CPU tests use Futuremark’s new game engine, which supports multi-threading of the AI and physics found in the engine. Both tests are extremely demanding of even the fastest high-end CPUs. 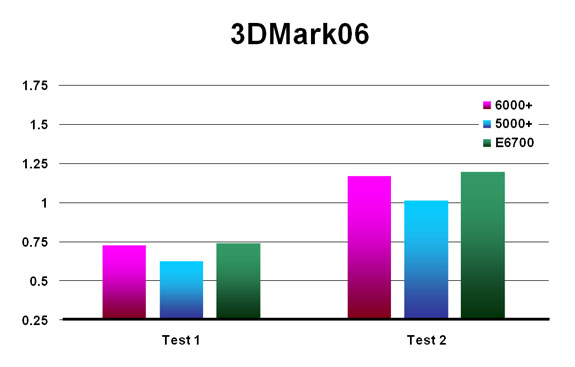 The X2 6000+ runs fairly parallel with the Intel part in these two tests, with the 5000+ falling behind by a noticeable degree.

Windows Media Encoder 9 was used for SimHQ’s content creation test. The application is a free download from Microsoft and greatly benefits from systems capable of accelerating its multithreaded design. Falcon 4: Allied Force’s intro movie, a 91 MB AVI file, was converted into a WMV file with high definition video and audio settings and the total time required by each processor to convert the file recorded. Shorter conversion times represent a better score for this particular test. 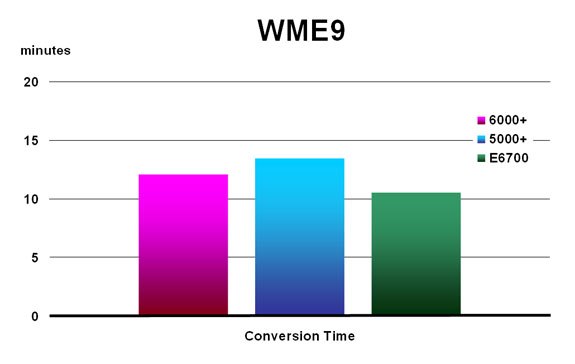 While the X2 5000+ takes almost a full three minutes longer to perform this file conversion compared to the Intel CPU, the 6000+ closes the gap to slightly over one minute.

Last, total system power consumption was measured using an Extech power meter supplied by AMD during Intel’s fiery Netburst years. Two results were generated for each processor: the first representing an idle state of the test machine running the Windows desktop for several minutes, and the second a load scenario created by running the full series of tests for PCMark05. Each score represents average wattage of the entire test system (sans display) for each scenario. Last, the power management features of both test systems were ensured as properly functioning prior to recording the idle state’s power draw. 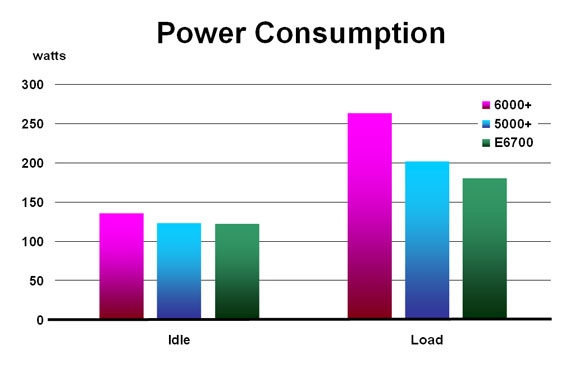 Thanks to power management implementations, both test systems see a similar power draw while sitting at the Windows desktop. Once under load, however, the X2 6000+ and its 3GHz clock speed sees a considerably higher power usage than the other two parts, a full 80 watts higher than Intel’s Core 2 CPU.