Falcon 4.0: Allied Force was tested using SimHQ’s Korean Air recording, which consists of a flight that comes under immediate attack by a pair of Su-27s. 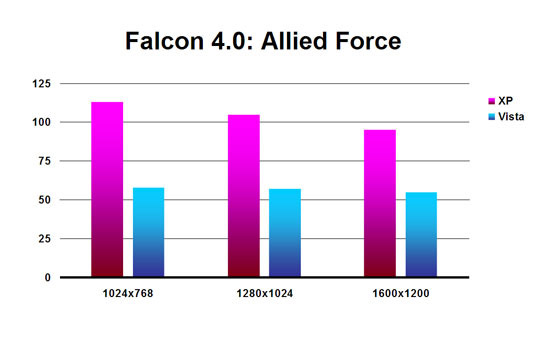 The XP scores are consistent with numbers generated by Intel’s X6800 processor in past testing. The Vista results, however, appear at first glance to be the result of Vsync being enabled. We double-checked settings and repeated the tests, with the same results occurring. FRAPS was set to record the frame rate per second and the recorded scores showed an occasional hike over the 60Hz refresh rate of the 3007WFP, so the Vista scores are not a result of Vsync. This gap could be the result of some quirk in how Allied Force is coded or possibly a bug in NVIDIA’s 64-bit drivers. Regardless, F4:AF is certainly still playable on Vista despite the huge performance loss.

Silent Hunter 4: Wolves of the Pacific was tested during an attack on a Japanese convoy. All in-game graphics options were enabled. 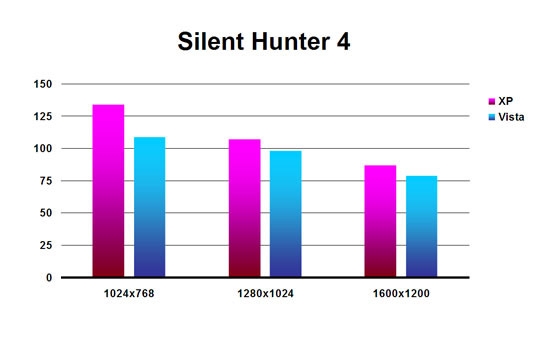 As with IL-2: 1946, the two OSes show a significant performance difference at 1024×768, with Vista lagging behind XP’s score by 25fps. Increasing the resolution, however, sees the performance gap narrow again, though the difference at both 1280×1024 and 1600×1200 remains roughly 10%, which is still a noteworthy variance.