A Company of Heroes was tested using the in-game performance test. For Vista, the DX9 profile was enabled and for both OSes most options were configured with high settings. 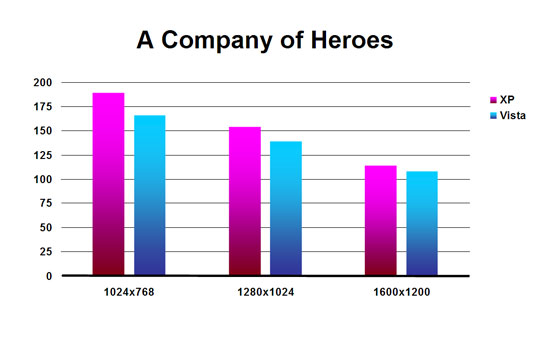 Relic’s WW2 RTS displays triple-digit scores for all test results, with Vista again repeating its performance losses against XP. The frame rate difference starts off at 22fps, a 15% variance, and ends at 6fps, a roughly 5% difference. This is hardly surprising, when keeping in mind how GPU-intensive A Company of Heroes’ performance test is.

Vista’s performance results for this article show, for the most part, a fairly consistent pattern. For end users still typically gaming at 1024×768, Vista’s scores displayed a significant performance loss compared to XP. There were a few anomalies to this pattern, such as GRAW2, but considering the high-end components used in SimHQ’s test system, users with lower-end machines should take note of the performance variance between the two operating systems. Those primarily using 1280×1024 — and with the current market saturation of 19” LCDs, this is possibly the largest demographic among SimHQ’s readers — would fare slightly better, depending upon the application; though, in our testing the performance results for Vista were still consistently lagging behind XP’s by a statistically significant margin.

Users with large displays, however, particularly widescreen LCDs such as 24” or 30” units, fall into a different category, with most games today being GPU-intensive and virtually 100% bound in performance by the GPU at resolutions like 1920×1200 or 2560×1600. In such usage, Vista’s performance deficits would be largely ameliorated as the performance onus of the application is placed almost entirely on the graphics hardware; internal testing conducted to satisfy the curiosity of this writer bears the above out, since any gaming title I currently enjoy is ran at the 3007WFP’s native resolution of 2560×1600.

If SimHQ were to hand Windows Vista a public school report card, based on our performance testing its grade would be a “B”. While performance in SimHQ’s benchmark suite lagged too far behind XP for our tastes, we honestly expected more compatibility and/or stability issues to arise due to using the 64-bit version of the new operating system and were instead pleasantly surprised over how few problems arose during the hours of installation, configuration, and testing spent for this article. In its current state, however, Vista incurs too much of a performance hit on older or new gaming titles to merit a higher score. There are also niggling issues that can arise from adopting a new operating system, such as driver support for peripherals; such issues aren’t within Microsoft’s domain of fault, but are a part ‘n parcel of migrating to a new OS. That said, however, Vista isn’t XP, the new OS includes quite a few unique features and, perhaps most important for those who game on Windows, boasts DirectX 10. Developers are already dipping their toes into those exclusive waters and it’s only a matter of time until they drink from no other well when choosing a D3D shader model to target as a primary development platform. In terms of comparative performance analysis, however, it’s possible that we’re being too hard on Vista and future testing could show less variance as more polished video drivers become available, particularly 64-bit driver sets. In the meantime, though, there’s no harm in waiting a while longer to giving a second, post-Service Pack 1, look at Windows Vista.