Owning a TrackIR 3:PRO with Vector Expansion, I was more than a little interested in trying out Track IR 5, to learn how it would acquit itself in comparison with the older version.

I have to report that after the initial enthusiasm with my four-year-old TrackIR:3PRO subsided, I used it less and less in racing sims.

The problem for me was that the view tended to “fly off” and get stuck in a position where I did not want it. I couldn’t get the tracking device to recognize my desperate attempts to get it unstuck again and showing me the proper point of view that I wanted it to. Ultimately, I grew a bit tired of recentering.

The big improvement with the TrackIR 5, as opposed to TrackIR 4 and earlier versions, is in the tracking process and software. Drastically enhanced resolution with a wider field-of-view should guarantee better, more accurate tracking, more responsiveness and smoother movement on screen.

This is why I have been testing the new TrackIR 5 for “stickiness” until my head hurt and my eyeballs wouldn’t stop rolling, hoping that the increased resolution and four years of development to the Track IR would bring the improvements I have been looking for.

A bit further on, you’ll be able to read about my findings.

The advertisements from NaturalPoint state that you will be impossible to pass, presumably an advantage, but I beg to see things in a different perspective.

The prime advantage in motorsport simulations as I see it is the ability to increase your situational awareness; to move your head and see if the inside line towards the apex is free for you to take, or if you have a competitor moving to the inside trying to outbrake you. By being able to look first, before you commit to the corner, you will be able to avoid creating accidents. Negating these advantages somewhat is the cars themselves, or the nature of the simulation. 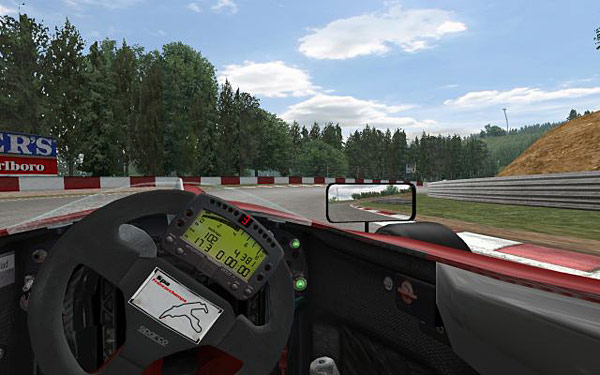 Modern formula cars with padded protection zones for the driver’s head and neck will limit visibility considerably for anyone driving using the in-car cockpit view, and in rallying such as Richard Burns Rally, there aren’t any other cars to crash into. In the latter example, TrackIR 5 will let you look where you are going. Imagine sliding the car through a right hand bend while you are looking out your left hand side window, or through the rear window, as you reverse out of the ditch and back onto the road.

Increased immersion is the clincher for me. Being able to move my head and glance across towards cars I’m passing — or cars I’m being passed by, adds another level of realism.

However, in some sims, the cars’ interiors aren’t modeled in every aspect, so turning your head too far can result in some odd visuals with no texture, or no car! That’s kind of an immersion killer, IMO.

The tracking device itself has been made flat, a design which was introduced with the TrackIR 4s adjustible legs. This makes it resemble an LCD or plasma monitor, and the benefit of this is that the device is readily mounted on your flat screen monitor.

The device may now be suited for LCD’s but it is liable to fall off, if you move the LCD around — as I tend to do quite a lot. Installation is very easy and quick. Load software — plug in — and play.

By strange coincidence I have recently had to get a new set of headphones as the old set packed in. Natually I made sure to get a set which would allow me to use TrackClipPRO. Almost immediately, I found the TrackClipPRO method of tracking to be vastly superior over the TrackClip attached to a cap which I had been using with my old headphones.

The TrackClipPRO on first glimpse looks like it should last for long-term ordinary use, but might break if you accidentally step on, it or drive your office chair over it — actually, a SimHQ staffer by light hand contact has very recently broken the light stalk at the swivel point, where the material thickness is revealed as being only a millimeter wide.

Maximize the interface screen and you start to feel like being on the holodeck matrix on USS Enterprise. Once recovered from the new appearances of the software interface, the changes really reflect a more user friendly interaction. Gone are the different tabs and sections where you would look for special functions, to be replaced by a single screen containing all relevant information and settings.

I noticed that the help file does not quote any metric measurements, only inches; for example: “The optimum distance between the user and the TrackIR is 24-36 inches.”

A large part of the world uses metrics and has been doing so for the last half-century, so we have absolutely no idea or concept of inches and yards and we’re too lazy to Google a converter. It would be nice if metrics were also quoted in the help file.

The help file contains explanations but no examples, e.g.: What to do to increase dead zone, avoid spiking (jumping off the scale and getting stuck looking at roof) etc.? How do I sensibly start to experiment with “Adjusting curves”? I’d like to see some practical examples or samples in order to facilitate the entry into the adjusting possibilities for the user who is new to TrackIR 5 as I think there is still a touch of “geek-factor” in making sure if you’ve optimized your profiles.

I tested the TrackIR 5 with a range of sim racing titles, and overall I thought I was able to track more precisely, more smoothly, and more reliably. I elected to turn on “precision mode” (F7) and I thought that gave me the best results, but since this mode has to be switched on every time the TrackIR 5 software is started, I keep forgetting to actually switch it on.

An updated version 0.7.6.0 of the GPL Shift utility which is needed to use TrackIR 5 with Grand Prix Legends, has been released by JSJ, adding support for the TrackIR 5.

Of all the sims I’ve driven, to me Track-IR is best savored with GPL. Perhaps it is my love for the era, the tracks and the cars. The views are unobstructed by bodywork and driver safety padding, and realizing that the reason why the view on the screen is tilting a bit is because you unconsciously tilt your head, is a big immersion factor.

I’m experiencing a very lagging and sluggish response with iRacing — this was also the case for me with TrackIR 3:PRO, the diagnosed cause being my aging single core processor, and possibly also in combination with my Logitech G25 wheel which takes up a lot of CPU cycles in iRacing. iRacing’s adding new functionality like flags and spotter deprive my CPU of the cycles it would need to also handle the TrackIR 5 routines.

Once I got TrackIR 5 centered properly, it gave good and smooth tracking.

I found the TrackIR 5 giving me a very good experience and visceral feel in netKar Pro 1.3. I was able to adjust for good responsiveness while maintaining stability and smoothness in tracking. The combination of TrackIR 5 and nK Pro’s visual presentation of bumps in the road, the cars reaction over these bumps and the kerbs, supplement each other perfectly, creating a great sense of actually being in a real live race car.

Again I found it a very good experience, being able to adjust for good responsiveness while maintaining stability and smoothness.

Very good, able to adjust for good responsiveness while maintaining stability and smoothness.

For some reason, the view from time-to-time tended to get stuck in the roof when glancing at the rear view mirror, or on the right hand side when looking out of the car. A GTR2 specific problem?

Very good, able to adjust for good responsiveness while maintaining stability and smoothness. But honestly, I haven’t got the brain capacity to move my head while trying to tame RBR, I just sit there rigidly like a rabbit caught in the headlights, wondering when I’m going to crash and if it’s going to hurt!

TrackIR 5 seems to me to herald a big improvement over previous TrackIR models with the increased responsiveness and resolution enabling more stable and smooth head tracking. As far as I can ascertain, the tendency for the point-of-view to get stuck or becoming unstable and jittery seems to be greatly reduced.

Personally, I still find it a challenge to move my head in the right direction, moving the focal point of my vision while still keeping in full control of the car. I think the trick for me is to do the side views while driving straight and only use a tiny bit of head-turning while negotiating corners. If I try to look 90 degrees or more to the side while turning, I find my brain gets so confused by the altering point-of-view that I invariably lose my concentration.