NaturalPoint’s TrackIR 5 is the latest version of the popular head tracking peripheral, boasting improved specs on several points over previous models. My use of TrackIR in writing this review was my first experience with the hardware, so I can’t make any comparisons to previous versions. Instead, I’ll be writing based on my first impressions and adjustment to using TrackIR from a clean slate.

My review sample arrived in a small blister package which was easy to open. The TrackIR camera is surprisingly compact, and mounts to the adjustable feet with a small magnet. Mounting the camera to my monitor was simple, and gave little worry about it staying in place. I also received the TrackClipPRO™ accessory for my review, which mounted very solidly to my headphones, though it’s construction initially felt somewhat delicate (specifically the joint where the LED array is mounted). Chunx told me the following story that happened to him regarding the TrackClipPRO:

“One night while driving Richard Burns Rally, I had an itch on my head, just above the ear cup of my headset. When I brushed my hand back to quickly scratch that itch, the edge of my palm hooked into the LED stalk on the TrackClipPRO. It didn’t take much, and ‘snap’ — the three-prong LED stalk snapped off with the sound of a fresh bean pod cracking open. The TrackClipPRO broke right at its swivel point, where the LED stalk latches into the base clip with two very tiny plastic hooks. One hook snapped off, leaving the LED stalk hanging by its wires. The unit was trashed. I felt as sad as a child who’d dropped his ice cream cone on the sidewalk, because it seemed like such a stupid, yet somehow unpredictable mistake. But that’s not the end of the story. I contacted NaturalPoint’s tech support email, and explained my boo-boo, expecting to be told ‘too bad, so sad — buy another one'”.

“To my surprise, Vincent G. immediately gave me an RMA number and instructed me how to mail in the broken TrackClip PRO. In just over a week, I received a brand-new TrackClipPRO from NaturalPoint, a fantastic testimonial to NaturalPoint’s quick and efficient — and quite generous — customer support. I now know that you’ve got to have slow hands whenever you’re working around the TrackClipPRO. It’s definitely a fragile piece of gear, but makes for much smoother TrackIR motion tracking. It’s a nice addition to the TrackIR product line, but you have to treat it with delicate care.“

The TrackClipPRO mounting mechanism itself impressed me as solidly built. 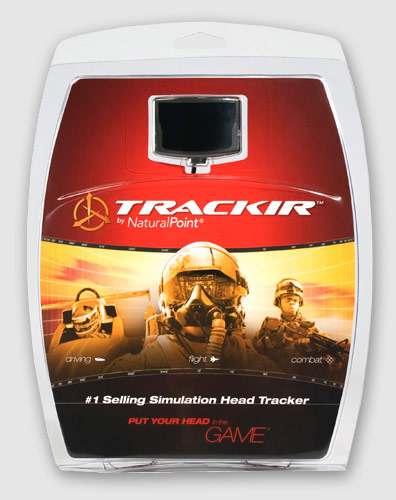 After a few moments setting up the TrackIR 5 software, I started up the Armed Assault (ArmA) editor to get a feel for the head tracking. Tracking response was incredibly smooth using the default profile. The response time was very snappy and I had no issues with loosing “center” even after quickly panning over nearly the full range of motion. The default profile has response curves which limited tracking responsiveness near the horizontal and vertical axes zero points. This permits small head movement without the view on the screen moving much from center, such as when slightly moving my head to look around the screen at chat or menus. Also included with the driver software is a “one to one” profile, which attempts to recreate realistic ranges of motion with no dead zones. This profile, while I didn’t prefer it for gaming, certainly demonstrated the sensitivity of the TrackIR 5 hardware. The very slightest movements were represented on screen to the point that I was not able to hold the view truly still. Adjusting the response curves for each axis is very easy in the TrackIR control panel, so I could create a preferred configuration which can be named and saved for future use.

During my hour long session in the ArmA editor I was able to get reasonably adjusted to using TrackIR, though I had a couple of issues. First was trying to merge the now separated “where I am looking” and “where I am moving” elements. I practiced moving between various locations with cover or concealment for a few minutes, and at first I would sometimes notice that I was running at an angle to one side or the other. This was caused by my head being unconsciously turned slightly to one side, which of course meant that when I wanted to walk forward to where I was facing, pressing “W” didn’t go quite where I was expecting. What I began doing to counter this, was trying to watch where the floating gun sight was in relation to the center of my view on the monitor. A few moments practice while paying attention to this and I was doing much better. 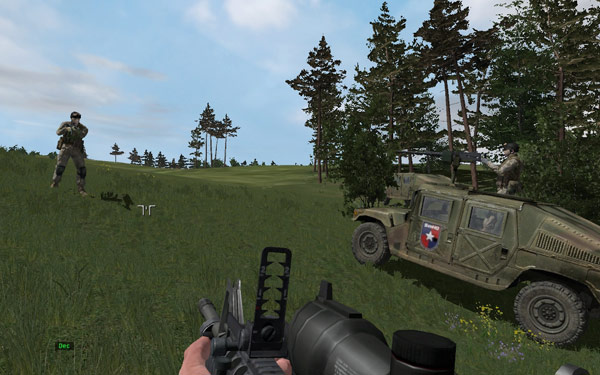 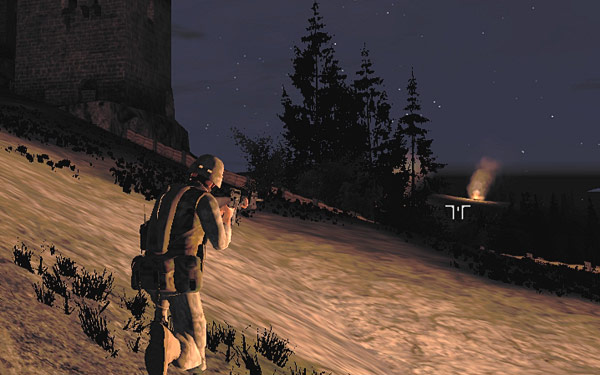 The second issue I encountered while testing was my habits while sitting in my swivel/rocker office chair. I noticed that I would often run to a nearby rock or building for cover, and after setting up to scan the horizon, my view would begin to move unexpectedly. The movements were caused by me swiveling the chair to one side or the other, or rocking back a few inches, movements that I wasn’t usually aware of while playing. Again, these weren’t difficult issues to overcome. My chair has a handle which locks out the rocking motion, and I moved my chair forward slightly so that I was sitting up slightly more.

The next few nights I joined some multiplayer games on the SimHQ ArmA server to experience TrackIR while “under fire”. Up first were some of “December’s” excellent CAS missions. These have player infantry groups working toward objectives on the ground, with two or three players as pilots in CAS roles when needed by the infantry players. I jumped into the A-10 pilot seat and headed toward the target area. After a couple of passes to engage enemy AA defenses, I was ready for some strafing runs with rockets and the GAU-8 cannon. Strafing passes and circling on station went smoothly, with TrackIR allowing me to keep the target area easily in view, scanning for the infantry players below to mark a target with smoke. Keeping aware of my wingmen’s movements was also just quick a glance away.

After the mission I realized just how effortless using the TrackIR had been. While I was engrossed in the mission, I was not paying attention to where my head was, but rather was simply seeing where I wanted to see in a rather subconscious way. I didn’t suffer any difficulties with losing forward orientation, since the cockpit, HUD displays, as well as marks on the canopy were always giving directional cues as I panned around the canopy. One issue I did have was when looking near the farthest left or right limits. The view would zoom in all the way when I’d look fully right, and zoom way out when I looked fully left. ArmA does use the “Z” axis for zooming the view, and this is easy to use and certainly useful, though attempting to move my head to correct the unwanted zooming didn’t work. After the mission, I edited the “Z” axis responsiveness in the TrackIR control panel, reducing it slightly. This solved the issue completely, and still let me easily zoom in when I wanted.

SimHQ’s “Military Monday” offered plenty of opportunity for me to experience TrackIR from an infantry point of view. By this time, I had a pretty good bit of practice, had tuned my TrackIR settings to my preference, and had a great gameplay experience. Covering my field of fire while remaining aware of my team’s position adjustments was as easy as taking a quick look over my shoulder. Much the same with advancing in a line formation, where I could quickly peek over at my team leader as he moved forward. These kinds of little moves to increase my situational awareness were nearly second nature, and certainly much faster and intuitive than using a keyboard and mouse.

Two new aspects of using TrackIR during “Military Monday” were looking out of vehicles and peeking around corners. While inside a vehicle in first person perspective, it was really identical to when on foot, just glancing around out the windows  and zooming in to scan the area ahead. I was pleased to discover that when using 3rd person perspective in a vehicle, moving my head would move the camera around the outside of the vehicle. This was particularly useful in the Stryker, where the view from the cockpit is very narrow. Players suffering from limited situational awareness in the Stryker is not uncommon, and I felt the TrackIR helped increased my awareness a good deal. 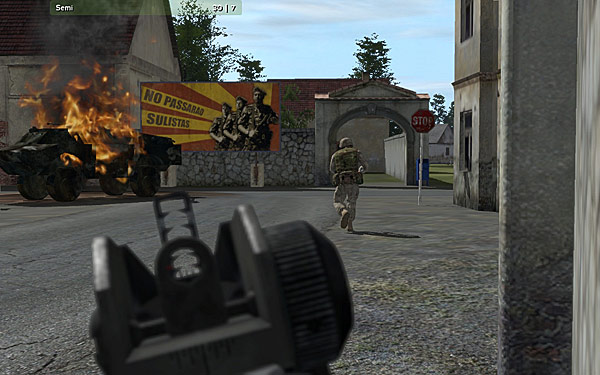 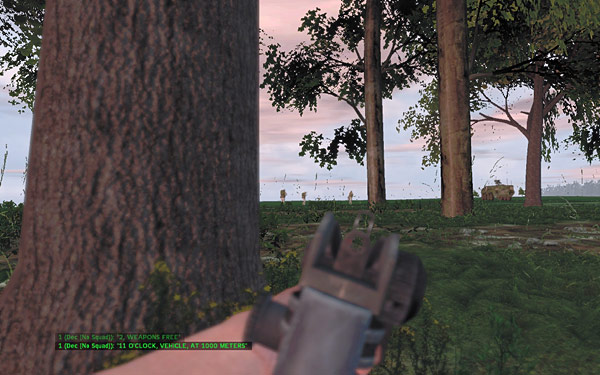 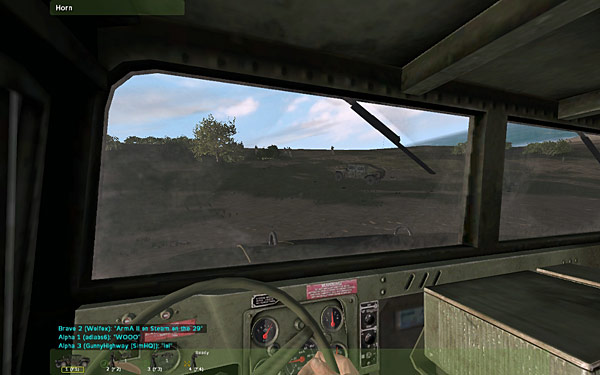 Peeking around cover and concealment with the “lean” keys very common in ArmA. TrackIR makes use of the “X” axis to allow players to actually lean side to side and see this represented on screen as their playable character leans with them. The TrackIR “leaning” is also proportional to the player’s movement, allowing just a little peek around a corner; an improvement over the default ArmA keyboard input which treats “leaning” as an all or nothing operation. This worked reasonably well in ArmA, though some might prefer to increase the “X” axis sensitivity, allowing a more narrow range of real world “leaning” to get the desired response on screen. With the default profile I had to lean pretty far over to get the maximum effect on screen.

As a player new to TrackIR, I was impressed. The product did exactly what it claims to do, and with little fuss. My personal adjustments to using TrackIR were smooth and pretty quick, and I feel like it offered added value to my gameplay. I think that NaturalPoint’s years of refinement of the TrackIR product are illustrated by the ease of use and high performance demonstrated by TrackIR 5. For serious sim fans who want the best, TrackIR 5 offers a unique experience certainly worthy of consideration.