Futuremark’s synthetic graphics suite, 3DMark Vantage, was tested with the preset option set to high and anti-aliasing and anisotropic filtering then set to 4x/16x for all tests. The high preset places the suite at a resolution of 1680×1050.

The various feature tests pretty accurately reflect the relative capabilities of the tested GPUs. The benchmark suite also seems to scale well with CrossFire, which is hardly surprising considering how high profile in the online gaming community Futuremark’s products have become over the years. The new HD 4850 fared fairly well against the factory overclocked GeForce 8800 GTX, scoring similar numbers in several of the feature tests and trading the high score lead in the two game tests. Considering that until the recent launch of the new GTX 280/260s NVIDIA lacked a single GPU solution that truly eclipsed the performance of the 8800 GTX, the HD 4850s results here are rather eye-opening for a $200 part. And in CrossFire mode, the HD 4850s saw an almost perfect doubling of a single 4850’s results in the various tests, with the one exception being the cloth feature… a result that is most likely due to some driver level quirk in handling the GPU-based physics of this particular test.

Crysis can bring any GPU to its knees at its higher settings, but since we’re previewing AMD’s third crack at a DX10 graphics chip we decided to test the shooter under high in-game settings. Anti-aliasing was applied via the application and anisotropic filtering forced via the control panel for all tested boards. The included GPU_benchmark was used for testing, which is essentially a fly-by of the game’s first map. 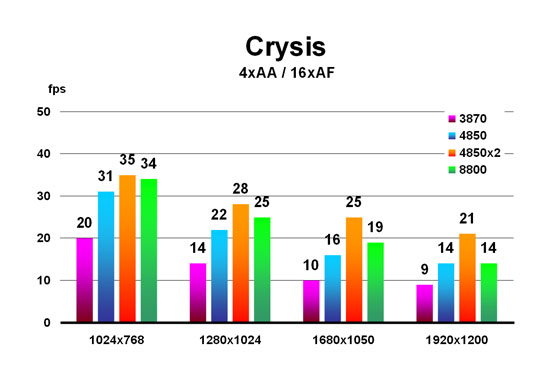 The high preset option was apparently too much even at the lowest resolution for last generation’s HD 3870, which generated unplayable frame rates across all test settings. A single HD 4850 saw a solid 50% gain over the older Radeon at all four resolutions, though the frame rate is still arguably too low for most players for a game of this nature. The single HD 4850 lagged behind the 8800 GTX at the lower resolutions, yet by 1920×1200 was able to match the GeForce’s score. Interestingly enough, the 4850s in CrossFire mode barely outperform the 8800 GTX at the lower resolutions, yet at increased resolutions the two 4850s pulled strongly ahead of the NVIDIA board. By 1920×1200 the 8800 GTX’s score was only two-thirds that of the two HD 4850s, though we doubt anyone is interesting in playing a shooter at 21fps. It is also worth noting how CrossFire scaled in performance as the resolution was increased compared to the single HD 4850’s results. 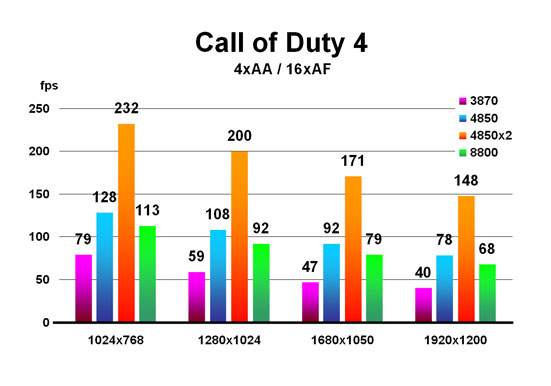 Call of Duty 4 sees all the test boards except the HD 3870 produce triple-digit numbers at the lower resolutions, with a single HD 4850 nearly doubling the frame rate of the older Radeon across the four resolutions. In fact, the HD 4850 also outperformed the GeForce 8800 GTX across the board by 15% or more. And Infinity Ward’s shooter scaled extremely well with CrossFire, reflecting the improvements AMD have made to their drivers in recent months in terms of multi-GPU performance scaling. This particular Crash map recording isn’t as intensive as we would like, and with the latest patch Infinity Ward has released new maps for the game so we’ll most likely record a new test demo for future use; particularly once SimHQ delves into any Radeon HD 4870 or GTX 280/260 testing.