World in Conflict ships with a benchmark test included, which we used under high settings with 4x AA and 16x AF then enabled in-game. 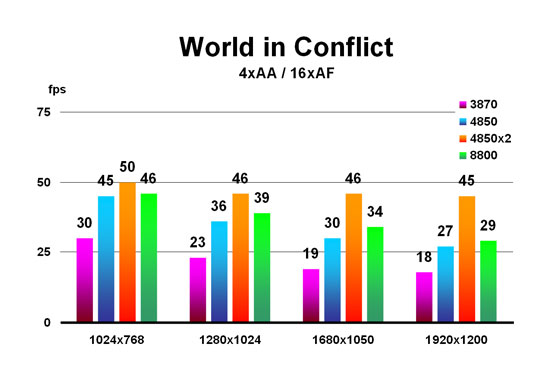 The HD 4850 was a solid 50% faster than the HD 3870 in this great looking RTS, posting playable frame rates at even 1920×1200. The single HD 4850 trailed slightly behind the 8800 GTX at each resolution, and like Crysis didn’t scale particularly well in CrossFire mode at the lower test settings. As the resolution increased, however, CrossFire maintained a steady frame rate that was 50% faster than the 8800 GTX by 1920×1200.

Race Driver: GRID replaces DiRT for our GPU motorsport benchmark test. We recorded frame rates with FRAPS in this fantastic looking game as we took a Camaro for one lap around the San Francisco Pro muscle track. Anti-aliasing was enabled via the game and anisotropic filtering through the driver control panel. 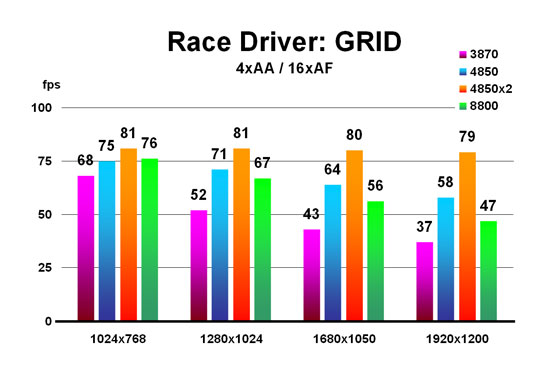 The HD 3870 saw its scores fall rather quickly as the resolution was increased, while the HD 4850 increased the performance gap to a 50%+ lead at the higher settings. The HD 4850 also outperformed the 8800 GTX in Codemasters’ latest arcade racer, particularly at the higher resolutions where it produced a solid 20% performance lead ahead of the 8800. As for CrossFire scores, we again see a similar pattern of the two HD 4850s scaling poorly at the lower resolution, yet shining as the settings are increased. This pattern is most likely the result of the GPUs not being the limiting factor in the application’s performance at such lower settings, with the CPU or system bandwidth acting as the probable culprit. Regardless, two HD 4850s produced a score higher at 1920×1200 than any of the other test boards at 1024×768.

CrossFire Anti-aliasing and Edge Detect Testing Because Call of Duty 4 performed so well with CrossFire, SimHQ decided to use Infinity Ward’s shooter for a quick glimpse at higher modes of anti-aliasing. Beyond just higher samples of AA, we also tested AMD’s edge-detect option with 4x and 8x AA in CrossFire. Edge Detect uses the shader processors to better filter pixel fragments that fall along geometry edges of rendered scenes to produce a higher quality anti-aliasing result. This technique does not change the number of samples being handled, which unlike NVIDIA’s control panel settings are always the same as the number selected (be it 4x, 8x, or, if running CrossFire, 16x), but can be expensive in terms of the performance hit incurred. AMD states that applying edge detect is equal in image quality to applying 3x the number of AA samples in terms of edge quality, so 4x AA should look as good as a 12x AA option if one were available to modern GPUs. AMD’s Catalyst control panel also offers additional anti-aliasing options, including customized filters (CFAA) and transparency options for improving the image quality of titles that make heavy use of alpha textures. Unfortunately, SimHQ did not have time for more in-depth testing of these options. 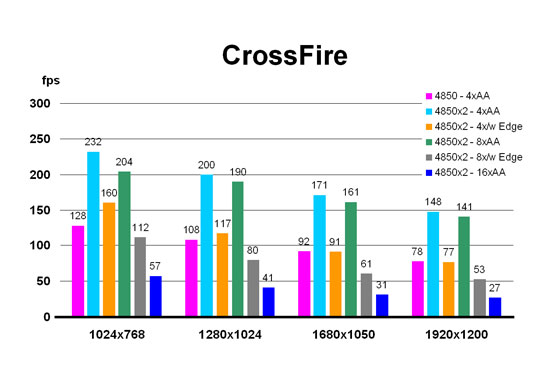 We included the single HD 4850’s performance numbers as a baseline to compare against for how well two 4850’s in CrossFire perform under more demanding anti-aliasing settings. Edge-detect with 4x AA causes a significant performance hit, particularly with higher resolutions where the frame rate is almost half that of regular 4x AA. Except at 1024×768, 8x AA is almost identical in performance to that of 4x AA, which conforms to the capabilities of the RV770’s upgraded ROPs (in CrossFire mode, each board is handling four samples for 8x AA and as such can still output 16 pixels per clock cycle). Edge detect with 8x AA brings the frame rate below that of a single HD 4850 running 4x AA, but still produces very playable frame rates. The last test setting, 16x AA, lacks an edge detect option, and looking at the scores we can understand why. With each 4850 handling eight samples, the ROPs see their fill rate cut in half, and with the frame buffer requirements of 8x AA at high resolutions the 512MB of onboard memory each board has is insufficient for these settings. We therefore see the frame rate plummet, with numbers that are roughly only 25-30% the scores compared to 8x AA.

While 8x AA costs little in terms of lost frame rates, the edge detect options are very compelling. For a title like Call of Duty 4 that has performance to spare on a HD 4850 this reviewer would almost always opt for 4x AA w/edge detect enabled over plain 8x AA. Even at higher resolutions there is less creep or noise along geometry edges with edge detect and fewer AA samples than vanilla multisampling and a higher number of samples. Either way, it feels like the enthusiast market has remained stagnant when it comes to the number AA samples GPUs have for years now made available, so the fact that 8x AA is actually usable from a $200 graphics board is a fantastic step forward compared to some of the blurry and image quality degrading post processing filters of the past.