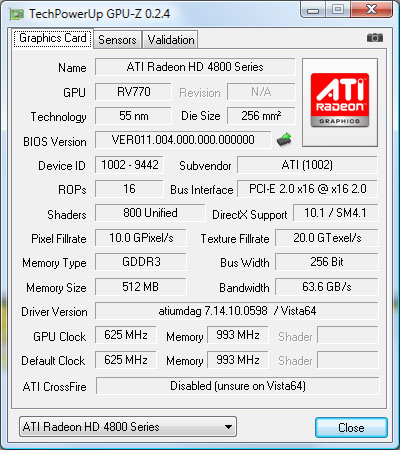 AMD’s Radeon HD 4850 essentially feels like a GeForce 8800 GTX in terms of performance. This might strike readers as damning with faint praise due to the fact that the 8800 GTX was released in late 2006 and here we sit 18 months later with AMD just now reaching performance parity with the first DX10 GPU released. But if you stop and consider the fact that the RV770 is a substantially smaller chip and that the HD 4850 is a single-slot, single power connector part with a shorter board that will simply work with more existing systems (since there is less chance of a case or PSU upgrade required), the engineering feat AMD pulled off for this new GPU is quite impressive. Yet the 8800 GTX is not the competition AMD faces these days; that would be the recently price-reduced 9800 GTX, with a die shrunk 9800 GTX+ coming fairly soon. Yet both of those products are 10.5” dual-slot boards that require two 6-pin power connectors, and readers need to keep in mind that we tested the HD 4850 against an overclocked 8800 GTX in this preview. Even with the physical characteristic advantages detailed above, the Radeon HD 4850 will still handle itself quite well against a 9800 GTX in the majority of games, and the improved GTX+ will not be available for a few months yet. At which point NVIDIA’s new $230 part could very well be facing HD 4850s priced closer to $160-170.

The Radeon HD 4800 series is shaping up to be an impressive improvement over the HD 3800 series. The RV770 chip, redesigned in so many key areas, is a fantastic piece of engineering for which AMD should be proud. AMD may not be willing to compete head-to-head against NVIDIA’s GT200, which is a massive, highly derivative chip that gives its parent company less flexibility in its price options, but from a business perspective SimHQ believes AMD knows exactly what it is doing and is taking a smarter, more mainstream market approach with the Radeon HD 4800 series. Considering that a $200 HD 4850 challenges anything NVIDIA has to offer at even remotely comparable prices, and forced NVIDIIA to lower the price of their $300 9800 GTX to even compete at this price point, the HD 4870’s higher clock speed of 750 MHz and GDDR5 memory at $300 is going to leave AMD’s competition scrambling to do more than just cut into their GTX 260 margins. Competition is good for the market and great for consumers, so SimHQ is happy to see AMD back in the saddle and releasing such outstanding products again.