Futuremark’s synthetic graphics suite, 3DMark Vantage, was tested with the preset option set to high and anti-aliasing and anisotropic filtering then set to 4x/16x for all tests. The high preset places the suite at a resolution of 1680×1050.

The HD 4870 sees a 20-30% gain in the various feature tests over the HD 4850 and scales extremely well in CrossFire, basically doubling the results of a single board. In CrossFire mode the two 4870s also outperformed the GTX 280 in each test by a considerable amount, which bodes well for actual game performance.

Crysis can bring any GPU to its knees at its higher settings, but since we’re previewing AMD’s third crack at a DX10 graphics chip we decided to test the shooter under high in-game settings. Anti-aliasing was applied via the application and anisotropic filtering forced via the control panel for all tested boards. The included GPU_benchmark was used for testing, which is essentially a fly-by of the game’s first map. 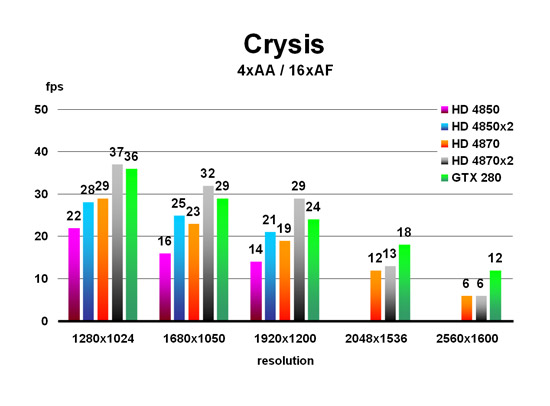 A single HD 4870 scored higher than two 4850s at 1280×1024 and trailed only slightly behind as the resolution increased. The frame rate for the 4870, however, dropped rather quickly beyond 1920×1200, with the 512MB of onboard memory being the likely culprit as the amount of available memory is probably not supplying a large enough frame buffer with anti-aliasing enabled. Two HD 4870s in CrossFire scale fairly well at the lower resolutions, but again see the performance drop sharply at the higher two resolutions. Up to 1920×1200, the two 4870s outperform the GTX 280, especially at 1920×1200, but beyond that resolution the 1GB of the NVIDIA board makes a huge difference in Crysis’ performance.