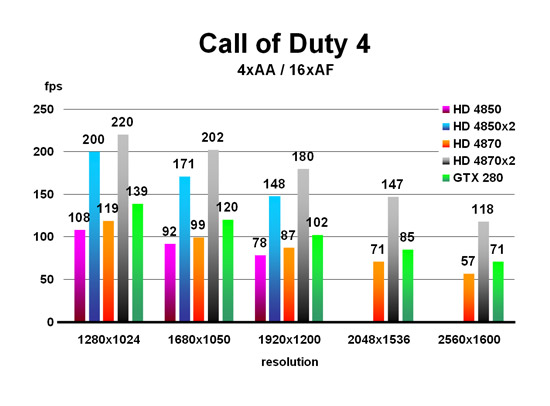 The HD 4870 sees a roughly 10% performance gain over the HD 4850, with excellent dual-board scaling exhibited. The GTX 280 outperformed a single 4870 in each resolution, but was thoroughly dominated by the CrossFire numbers, losing by 60-80% in the various resolutions.

World in Conflict ships with a benchmark test included, which we used under high settings with 4x AA and 16x AF then enabled in-game. 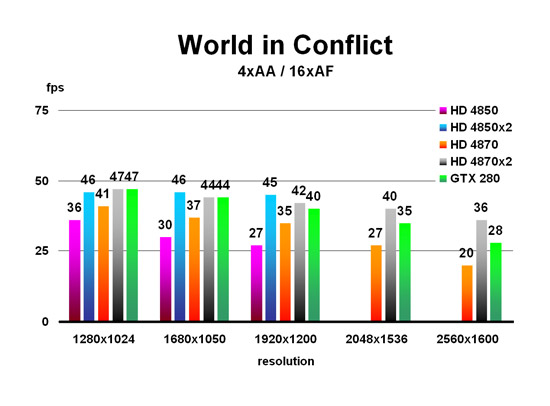 The HD 4870 outperformed the 4850 by a solid margin, with its lead increasing as the resolution was increased. As with 4850 CrossFire testing, two 4870s didn’t see a large increase at the lower resolution, but the performance dropped at a slower rate with the multi-GPU setup, scaling well and giving playable frame rates at 2560×1600. World in Conflict tends to favor NVIDIA GPUs, yet despite this the GTX 280 was again thoroughly trounced by two 4870s at the higher resolutions.

Race Driver: GRID replaces DiRT for our GPU motorsport benchmark test. We recorded frame rates with FRAPS in this fantastic looking game as we took a Camaro for one lap around the San Francisco Pro muscle track. Anti-aliasing was enabled via the game and anisotropic filtering through the driver control panel. 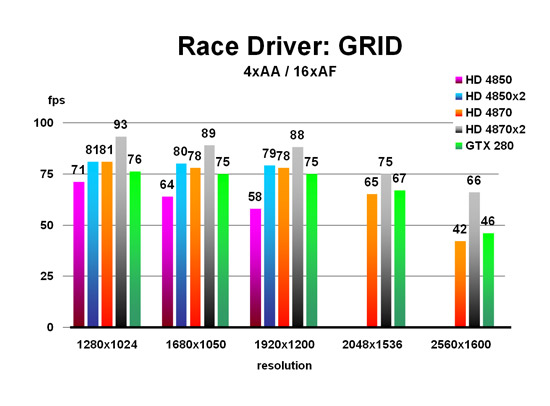 The 4870 again outperformed the 4850 by a solid margin, increasing its performance lead at higher resolutions and, in fact, performed almost identically to two 4850s. GRID scaled only slightly in CrossFire at the lower resolutions, but like World in Conflict saw a slow frame rate drop as the resolution was increased. A single 4870 outperformed the GTX 280 up to 1920×1200, and trailed slightly behind the NVIDIA board at the two highest resolutions. In CrossFire mode, the 4870s dominated across the resolutions, trouncing the GTX 280 at 2560×1600.