A week prior to Intel’s first 45nm processors actually becoming available on the market, the company was already sending out another Yorkfield quad-core part to reviewers. SimHQ reviewed Intel’s Core 2 Extreme QX9650 several weeks ago, a 3.0GHz processor that was tested on an X38-chipset motherboard, yet the new CPU wasn’t available for sale until November 12th. Intel introduced a 1333MHz front-side bus with the P35 chipset earlier this year and the X38 continues support for that bus speed; yet some 3rd party X38 boards also support a higher 1600MHz FSB, a rating that will receive official support in Intel’s upcoming X48 core logic chipset aimed at the high-end, enthusiast market. All of which brings us around to this performance preview for the QX9770.

The new Core 2 Extreme QX9770 has a clock speed of 3.2GHz and is designed to run at a 1600MHz FSB. With its higher frequency, the processor likewise has a slightly higher TDP rating of 136 watts compared to the QX9650’s 130W rating. The CPU is positioned for a first quarter 2008 release, with a price tag higher than that of current Extreme processors, though no additional details are available at this time. Last, with an NDA lift of the evening of November 18th, we can’t help but think of this processor as something of a spoiler for AMD’s Phenom launch, a CPU with a FSB that is not yet officially supported by Intel’s chipsets and that won’t be available for months to come.

SimHQ naturally decided to test the QX9770 against the newly available QX9650. Yet we also decided to overclock the QX9650 by bumping its multiplier up to 10, giving it a clock speed of 3.33GHz in an effort to better discern the performance differences between processor speed and higher front-side bus speeds. Therefore two sets of scores are included for the QX9650, those running at its default of 3.0GHz / 1333MHz FSB and those generated while running at 3.33GHz / 1333MHz FSB. 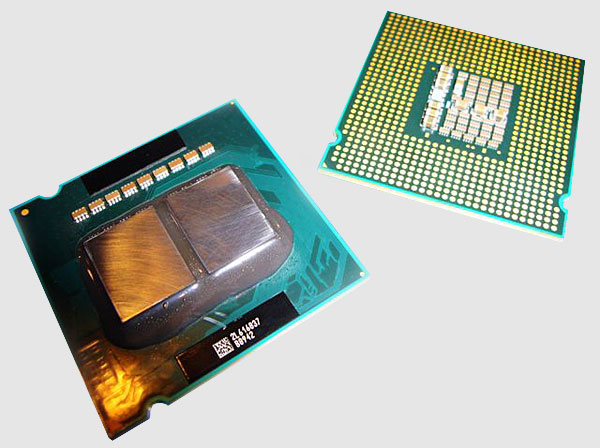 All testing was conducted on a clean install of Windows XP Professional x86. The test system used the following components:

The latest BIOS and chipset and add-in component drivers were installed. The NVIDIA control panel was set to application-controlled for both anti-aliasing and anisotropic surface filtering so as to disable both features, with high quality filtering used throughout all testing. FRAPS 2.9.2 was used to record frame rates for applications that do not output performance data. And the following list of synthetic applications and game titles comprised SimHQ’s benchmark suite for this article:

For our QX9650 review SimHQ had moved away from testing processors across a range of resolutions, though we included both low and high settings for the two resolutions — 800×600 and 1280×1024 — used. For this performance preview we made the further change of configuring game titles internally for low settings at 800×600 and the more demanding in-game settings at 1280×1024. Our minimum exceptions were FSX Acceleration and Silent Hunter: Wolves of the Pacific which do not offer lower than 1024×768 resolution. As before, the first resolution is low enough to allow high-end processors to differentiate their performances, and the latter is perhaps the most commonly used resolution due to the current market saturation of 19″ displays and represents more of an actual real-world usage scenario.

Readers will notice that the installed OCZ Reaper memory has been dropped down to DDR2-800 speed from 1066 used in the QX9650 review.  The ASUS Maximus Formula does not officially support DDR2-1066 and we were unable to maintain stability in our test system with voltages safe to run with the Micron modules used on these memory sticks. Alert readers will also note that we’ve changed our test suite quite a bit since the QX9650 review, adding new titles like Crysis and Call of Duty 4 while removing aged simulations such as Falcon 4: Allied Force. We’re hoping that 2008 is a better year for flight sim enthusiasts than the previous ones.