The Digital TripleHead2Go in Use on the Windows Desktop

As any multi-monitor user knows, 2D computer work (general productivity, email, internet browsing, photo editing, etc.) benefits greatly when multiple monitors are available to spread out and organize your work. SimHQ’s review of the Analogue TripleHead2Go called out a number of issues involving poor desktop management using a triplehead desktop with a TripleHead2Go.

It’s disappointing to see that the desktop management features of PowerDesk SE, poor at the release of the Analogue TripleHead2Go, have not been improved for the Digital product. In fact, discussion with a Matrox representative indicated that the desktop management features in the Analogue TripleHead2Go’s PowerDesk SE were unchanged from the release of the Matrox Parhelia GPU in 2002. While this representative seemed to use that as justification for the features, I would think that a simple desktop management product could be upgraded in the span of five years. The only useful thing PowerDesk SE can do on the Windows desktop is to constrain a maximized window to a single monitor.

Matrox has said that in the future new features will be added to PowerDesk SE. A feature called “swap active window” will allow users to move windows around a triplehead desktop, although Matrox was unclear as to whether this will allow the swapping of maximized windows (currently, if you want to move a maximized window you must restore it, drag it to a new window, and maximize it again). Another feature will serve to make location of the mouse cursor easier if you lose track of it.

As many multi-monitor users know, a software title by the name of Ultramon provides all the multi-monitor features one could want and can be registered for a nominal fee of about $25. For the $329 MSRP of the Digital TripleHead2Go, users of the Matrox product deserve the same functionality. I know of a few users, including myself, that use a secondary GPU, dual-input monitors, and run the TripleHead2Go at a single-screen resolution on the desktop to avoid dealing with Matrox’s poor desktop management software. 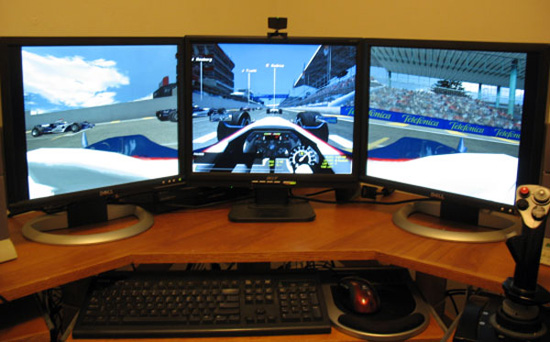