Futuremark’s synthetic graphics suite, 3DMark06, was run at 1280×1024, its default resolution, with 4x anti-aliasing and anisotropic filtering enabled to produce a total score.

The GeForce 9600 GT barely squeaks out a win against the Radeon 3870, beating the AMD part by just slightly over 200 points. And both parts outscore the 3850 by over 1,000 points, so we’ll see if this is reflected in actual, real world performance.

Crysis can bring any GPU to its knees at its higher settings and the fact we’re dealing with midrange GPUs in this article SimHQ decided to set the shooter to medium. The included GPU_benchmark was used for testing, which is essentially a fly-by of the game’s first map. 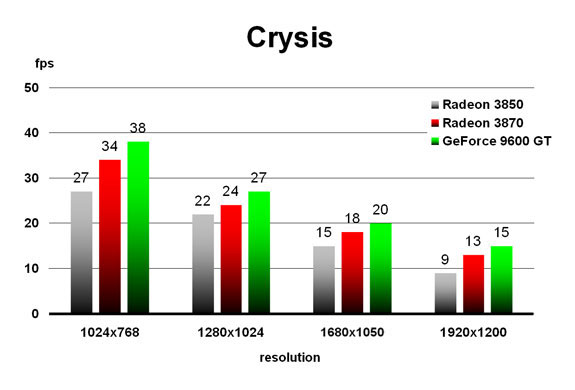 Bearing in mind that 4x anti-aliasing was enabled for all testing, a setting that might be a bit too demanding for ~$150-170 GPUs in this particular game, the two faster boards pulled down frame rates that are probably playable for most at 1024×768, with the GeForce 9600 GT pulling down a 10% advantage across the four resolutions. The Radeon 3850’s score of 27fps is just too low for the majority of players, at least in this genre of game where smooth frame rate is more important for enjoying the experience. Above 1024×768 none of these midrange GPUs offer playable frame rates, though in-game settings could always be lowered for those without as demanding a palette for their visuals.

Call of Duty 4 was benchmarked using a custom recording made while playing an online match on the “Crash” map. The game’s various graphics options were enabled and the texture settings placed at Extra. 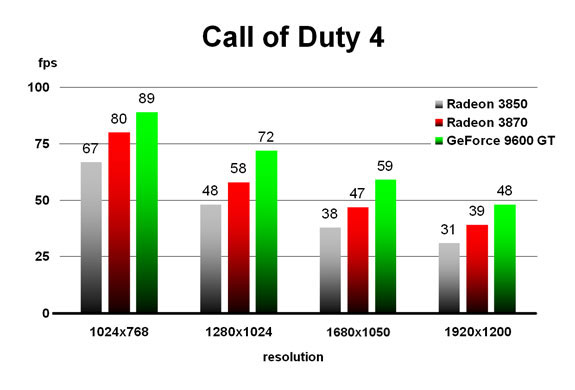