Rainbow Six: Vegas 2’s in-game options were configured at high and quality level 2 chosen for its anti-aliasing setting. FRAPS was used to record the frame rate via run-throughs of the Terrorist Hunt game mode on the Villa map. 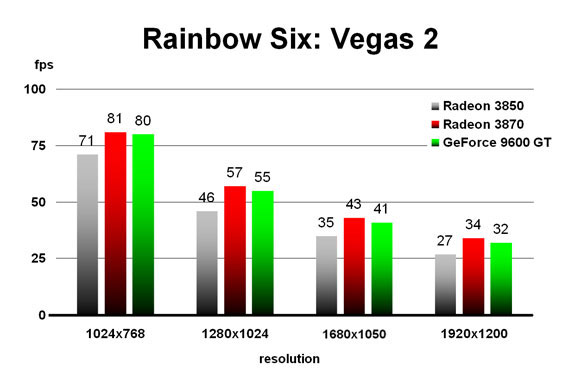 The Radeon 3870 pulls out a narrow margin in this newest Rainbow Six title, squeaking past the GeForce board by just a few frames at each resolution. The Radeon 3850 again trails behind, though producing decent frame rates up to 1680×1050.

DiRT continues the 9600’s dominance at the lower resolutions, with the frame rates evening out and the Radeon 3870 actually pulling out a narrow victory by 1920×1200. The 3850 again trails behind both of the other tested boards and offers playable frame rates at only 1024×768, at least under these settings.

World in Conflict ships with a benchmark test included, which we used under high settings with 4x AA then enabled. 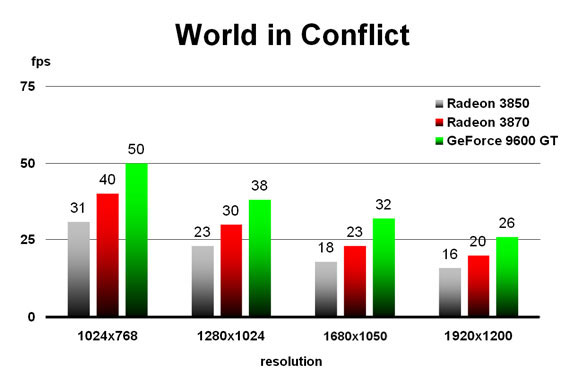 This RTS shows a significant performance gap between the tested GPUs, with the GeForce 9600 GT again upstaging the two Radeon boards. The 9600 outperforms the 3870 by a noteworthy 25% or more across the tested resolutions and is the only part of the three that might produce playable frame rates in WiC at these settings at 1920×1200. The 3850 quickly runs out of steam at any resolution above 1024×768, and the same can be said for the 3870 at 1280×1024.

Vintage Aircraft Inclinometer, Neat Made By Honeywell for US Navy
$84.0