Futuremark’s synthetic graphics suite, 3DMark Vantage, was tested with the preset option set to high and anti-aliasing and anisotropic filtering then set to 4xAA/16xAF for all tests. The high preset places the suite at a resolution of 1680×1050.

Readers will notice that not all feature tests scaled correctly with the X2 installed, which is most likely just a driver hiccup. Regardless, the X2 slightly outperformed the two HD 4870s by a small percentage, losing ever so slightly though in the color (pixel) fill rate test. And both multi-GPU solutions scaled extremely well compared to a single HD 4870’s scores.

IL-2: 1946 was tested with the “Zero vs P40” track. The game was run in OpenGL mode with max settings and the conf.ini file used for setting the resolutions. 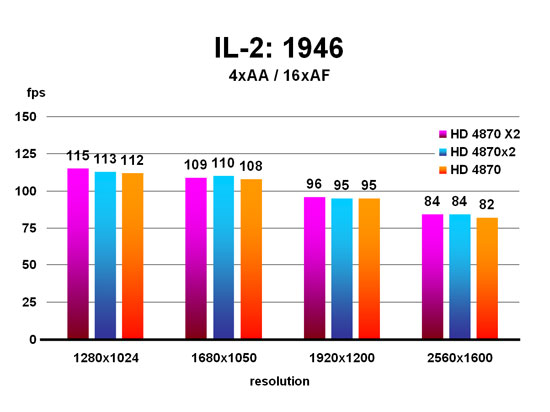 The latest iteration of Maddox Games’ long running WW2 combat sim showed no performance gains from the presence of a second GPU. At first glance a reader might suspect that AMD simply might not have profiled the title for CrossFire, or that it may be incompatible with AFR, but it’s far more likely that the title’s renderer simply isn’t GPU-intensive when running on a RV770-based board. While a single HD 4870 scored slightly lower at 2560×1600, the 2 fps difference is well within margins of error. 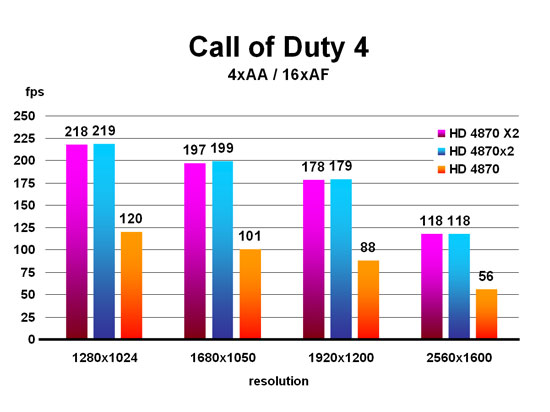 Call of Duty 4 scales extremely well in both forms of CrossFire, with the X2 scoring just a frame or two slower than the two 4870s in most of the tested resolutions. With such higher numbers, however, these scores can be regarded as essentially identical. And even at 2560×1600 with 4x AA, a regular 4870’s 512MB frame buffer is obviously sufficient for this particular title since the X2’s 1GB frame buffer sees no performance gains at these settings.