More Buttons On The Wheel

A common critique of the G25 was that despite offering a total of 10 programmable buttons and an 8-way D-pad, only two of those buttons were placed on the wheel itself. The other buttons afforded great programmability, but required you to take your attention off the road and a hand off the wheel in order to actuate them. Now, the G27 boasts four additional buttons on the leather-wrapped, 11” wheel. This necessitated wider metal spokes on the wheel itself, but the increased spoke size was minimized by using smaller buttons. 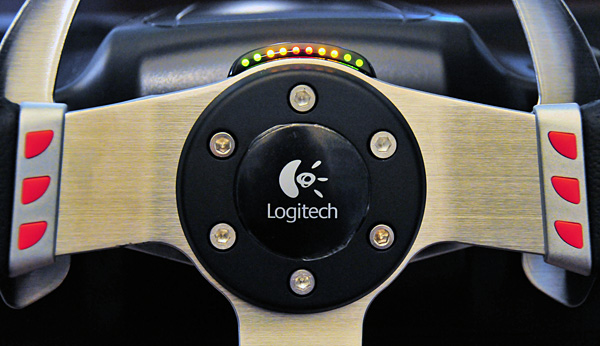 Atop the wheel hub is a streamlined plastic fairing containing a 10 LED array, with 5 pairs of lights that illuminate in an advancing string from green to amber to red, indicating relative rpm and arrival at the desired shift point on the power curve. The LED array emulates the way modern Formula 1 cars display relative rpm and shift points to their drivers, and is a glitzy addition to the G27. In order for them to work, the racing sim in use has to support their operation. Logitech created a software developer kit (SDK) for simulation development teams, and titles are now appearing that support this G27 feature. The G27 comes bundled with a version of rFactor that supports LED operation, SimBin has already included support for the rpm/shift LED in the Steam versions of Race ‘07 and GTR Evo, and other upcoming racing titles should also support it. The rpm/shift LED may be of particular value to people who prefer to drive in other than the cockpit view.

The G25 and G27 Uses the Same Housing

OK, so you’re probably wondering what the heck a helical gear is. Helical gears have the spine of each gear tooth cut at an angle that is not perpendicular to the gear disk. Make sense? No? Well, a picture says a thousand words, so check out these two videos:

The G25’s dual motor force feedback system used conventional straight-cut or “spur” gears on the FFB transmission. They’re simple to manufacture, but as we now know they can be loud and generate vibration when the gears are rotated quickly, due to the rate at which the teeth make contact with each other.

Now take a look at a set of helical gears. The angled gear teeth allow for a more gradual rate of contact between the teeth, resulting in smoother, quieter force feedback with less vibration. But switching to helical gears required Logitech to up the ante with much tighter manufacturing tolerances. Helical gearing, combined with a transmission supported by two sets of steel ball bearings, helps the G27 advance the breed in terms of wheel smoothness and efficiency.

The G27 features enlarged paddle shifter micro-switch housings that are now external to the wheel shaft cover. The micro-switch pins visibly stick out of each housing, which hopefully won’t make them vulnerable to dust intrusion or damage. 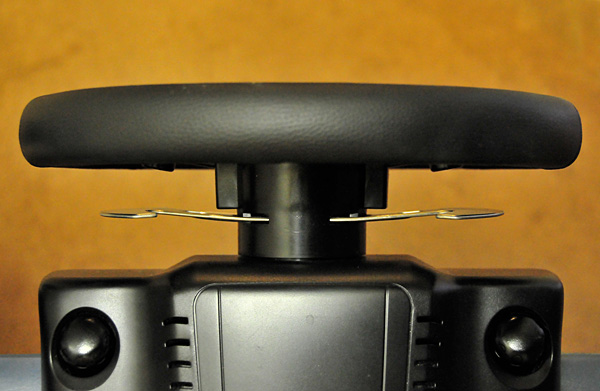 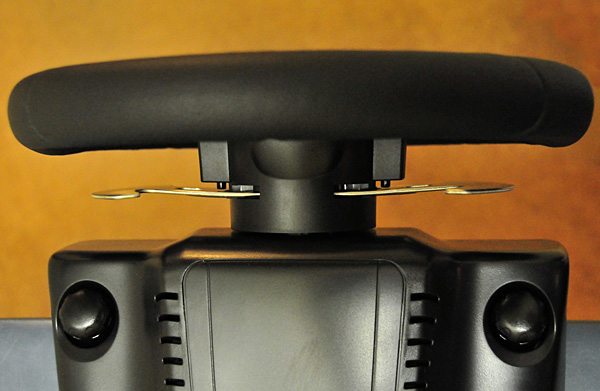 Although SimHQ raved about the G25’s pedals in its 2006 review, the one area for improvement revolved around the geometry of the pedal faces. With all three in the same plane, it was very difficult to effectively execute heel-and-toe shifting. What was needed was to set the throttle pedal back a bit, so that a driver’s foot didn’t touch it until the brake was slightly depressed. Again, Logitech’s engineers were listening, and on the G27 the brake and clutch pedals moved forward with the help of a 13mm spacer block behind the pedal face, allowing for more natural and effective heel-and-toe braking. 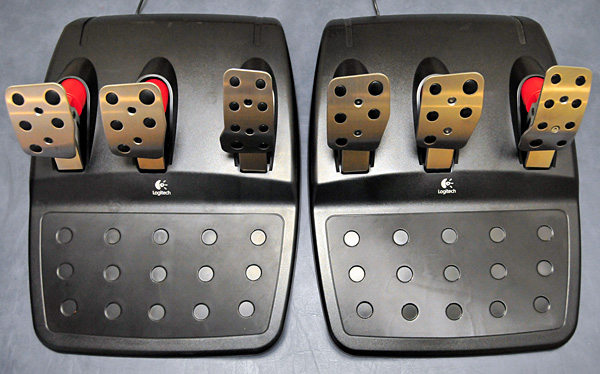 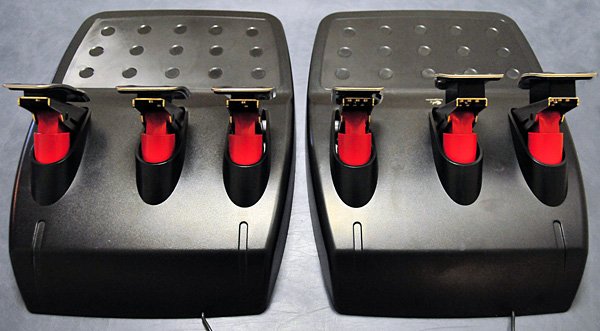 By including two additional sets of bolt holes in each pedal actuator, consumers can now tailor their G27’s pedal face locations to further refine heel-and-toe ergonomics. Each G27 comes with pedal faces attached to the center attach holes, but with the use of an Allen wrench from your tool box, drivers can alter the location of each pedal face about ¼” left or right. This is a very welcome feature as feet come in all shapes and sizes. 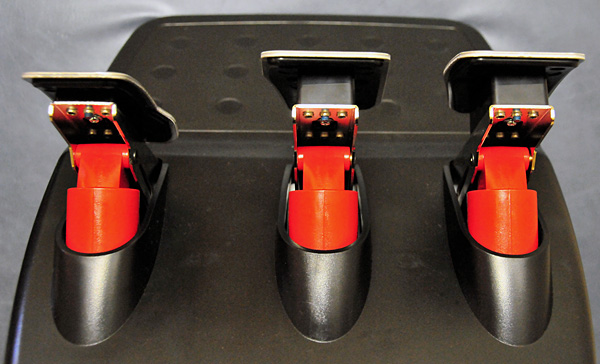 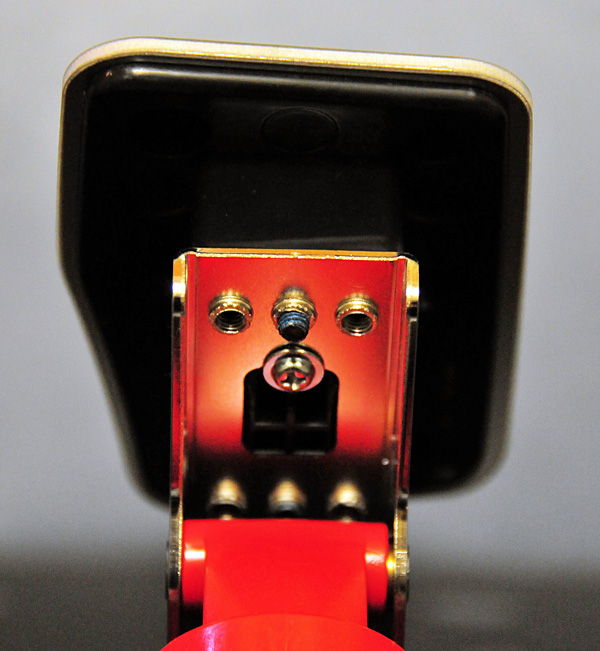 The dual mode H-pattern/Sequential shifter pod was a versatile and ambitious feature of the G25, but ultimately the very things that made the shifter unit the product’s most appealing aspect eventually became the G25’s Achilles heal. Some necessary design compromises left the shifter’s H-pattern mode with a weak and vague feel that accurately simulated a shifter made from wet pasta and seemed prone to mechanical breakdown, despite having moving parts constructed of steel. The G27 addresses those issues with a complete redesign of the shifter unit aimed at giving a quieter, more positive ‘feel’ to the H-pattern shifter. It also eliminates the light clicking noise that really made the G25 shifter sound like a cheap toy. 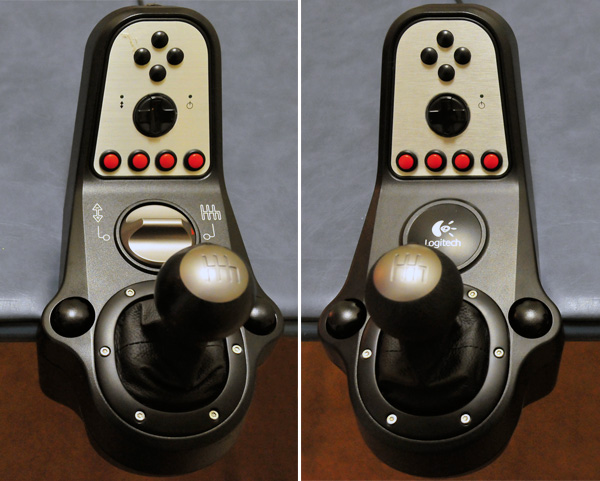 Just as the G25 shifter design required compromises, so too does the G27’s. Increasing the firmness and positive action of the H-pattern shifter not only meant tightening up some spring tensions, but also clearing out some conflicting hardware. After a lot of hand-wringing and arguing, the Logitech team decided that in order for the H-pattern to fulfill its destiny the sequential shifter had to go. Yes, you read that right: the G27 has no option for emulating a modern race car’s sequential transmission, other than the wheel’s paddle shifters.

The G27 ships with Logitech Profiler version 5.05 and an rFactor DVD with the LED support. Like the rest of Logitech’s racing wheel lineup, the G27 is compatible with PC, PS3 and PS2 gaming platforms. Thankfully, the new Profiler’s wheel calibration/test GUI no longer has loud explosion sound effects tied to each wheel button activation, remaining peacefully mute during FFB checks.