Now lets discuss each of the three main components in the system.

The stick features multiple buttons on top, a coolie hat which is actually a mini-stick (excellent for controlling radar cursors), a 8-way view switch, a dual detent trigger, and on the base of the stick trimmers for 3 different axis. The three rotary trimmers can be assigned as axes or other functions. 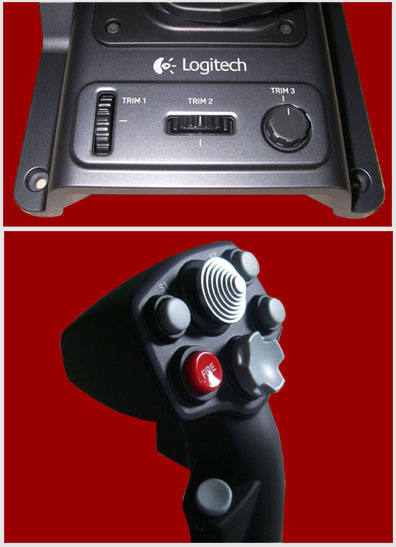 The stick feels comfortable in the hand although it is a bit smaller in circumference than the only other stick I can use as a reference, the Saitek X52. Right away you’ll notice the stick is limp (insert joke here) before it is plugged in because it is a force feedback unit. Triggers, buttons, and hats are all easily reachable and I really like the feel of the coolie hat mini-stick on the top of the stick. The dual stage trigger under the index finger is comfortable and since it has two stages you can map it such that a half pull fires one set of guns while a full pull on the trigger fires all of the guns in planes equipped with multiple armament types. The trimmers on the base are nicely configured, rotate smoothly, but oddly lack a centering detent, so that has to be accomplished visually by lining up a somewhat faint black line on the rotary with a line on the base. You’ll also notice four holes in the base of both the stick and throttle to allow the devices to be permanently mounted to a table or home cockpit setup. The bottom of each controller also has thin rubber pads that allow the bases to grip smooth surfaces such as glass or wood tabletops.

The image below shows the mapping capability of Falcon 4.0: Allied Force to the coolie hat. 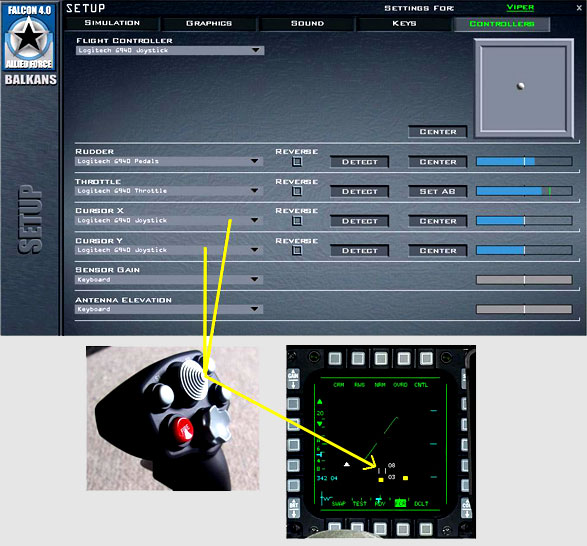 Here is a video demonstrating the coolie hat radar in Falcon 4.0: Allied Force.

Once under force feedback control the stick forces are moderate, but adjustable via the programming software. There is the tiniest bit of waggle in the stick while in the neutral/center zone, and there is a bit of that gravelly sensation of feeling gears mesh when you are moving the stick outside of the center zone. If the program supports FFB and you are flying aircraft or helos that require trim, you’ll quickly realize the benefits of aggressive trimming. I found that most noticeable when flying DCS: Black Shark since the trim function in the Ka-50 is often used to relieve control force pressures. Mapping the “trim set” command to a button on the stick will prevent you from fighting against the force feedback pressures as aircraft speed and configuration are changed.

One “Hollywood” feature that is lacking on the G940 as compared to the Saitek X52 is the lack of a guarded missile button. While perhaps not terribly realistic, I did find it useful to map particularly valuable missiles (such as the Hellfire) to a guarded switch so that I didn’t inadvertently fire one on accident. Or, in an even worse scenario, accidentally firing an AMRAAM “Mad Dog” and shooting down your wingman! It is worth noting, however, that the G940 stick’s FIRE button is slightly different than the other three buttons on the top of the stick in that it is slightly larger, has a slight concavity to it, and is also colored red. 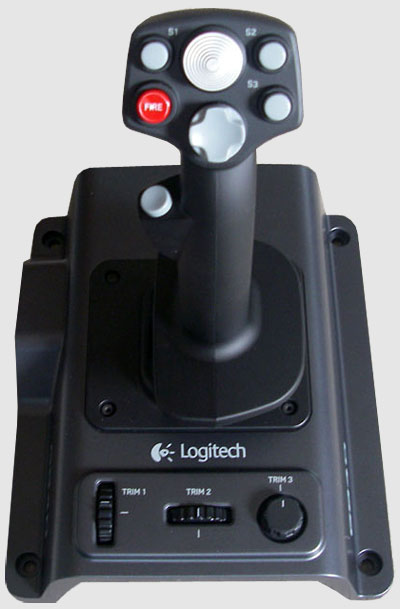