First, let me be clear: I am not a Windows guru. I’m the target audience for those witty Mac ads on TV espousing PCs to be crap and Macs to be the end-all be-all of home computing needs. But I am a tinkerer, and my PC addiction has been well served by the cheap and widely available components that make owning a PC the love/hate relationship that it is. At various times throughout the past two decades I’ve owned most of the previous mainstream Microsoft Operating Systems with the exception of NT and 2000. My most recent experience was with Windows Vista on the laptop I bought last year and I absolutely hated it. Enough that when I built my power desktop last year I went ahead and stuck with XP. My list of grievances with Vista is relatively short, but the level of frustration I experience when dealing with the multiple “helpful” things in Vista really set the tone and I never did get over my dislike of it.

So I was skeptical when I heard about Windows 7, but with a power desktop just waiting to use 64-bits (I don’t know what those are, but they are double 32-bits so it has to be good right?) and the not-so-secret desire to see all of my 4GB of memory addressed, I figured I had nothing to lose. Making the decision easy was the fact that it has been over a year since I had done a clean format of my system and I had the detritus of hundreds of programs scattered all over my hard drive and registry. FSX was refusing to run, Windows 7 Release Candidate 1 (RC1) was available, and I had nothing to lose by giving it a shot. Good news had been trickling out from the beta testers that W7 was going to be a great release, so I was excited to give it a shot. 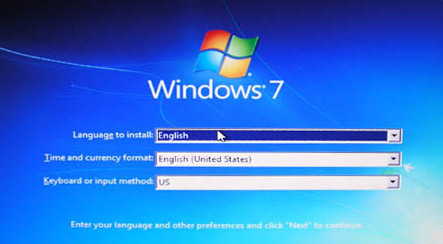 Welcome to the Windows 7 installation!

From all that I’ve been told and read, it is a good idea to just bite the bullet and do a clean W7 install instead of trying to overlay it on a previous version — and if you are upgrading from XP you have no choice anyway. I have no empirical evidence that this is better, but it sure seems like it should be better. I have a rather tiny 150GB Raptor drive as my primary hard disk, so space comes at a bit of a premium for me (it’s not the size of your drive, but how you use it after all). The version of W7 I installed was Windows 7 Ultimate 64-bit. I don’t know the differences between Home, Premium, Ultimate and 32-bit, so you’d be best seeking guidance on those matters from someone who gives a… I mean understands the technical differences between the various versions [editor’s note: a link is provided to a comparison page at the end of the article]. 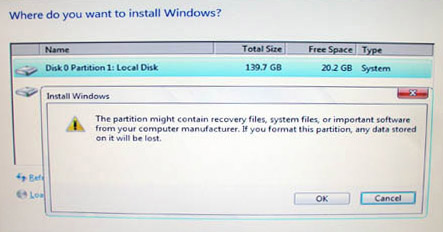 An hour later I realized I had a few gigs of data I had forgot to back-up. Ooops!

The install was quick!

The installation process was VERY quick, about 25 minutes, and you don’t have to suffer through the half a dozen reboots that previous versions of Windows often required. Once the system was up and running I was surprised to see that W7 automatically recognized that I had a dual video card setup and had automatically spanned the two monitors and had configured them correctly without me having to do a thing. Impressive! It was also with great relief that I saw W7 had found my internet connection automatically and I was able to connect instantly without having to go through a convoluted system of network options. After years of working with XP I still don’t know what proxies, VPNs, ports, and all that other stuff are. I want to insert my LAN cable into the back of the computer and then surf the Internet via the series of tubes — and that is what W7 allowed me to do. No mess, no fuss. 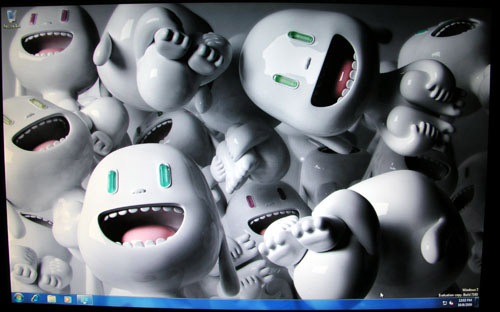 One of the truly creepy desktop backgrounds future Jeffrey Dahmer’s can select.

I liked the clean desktop I was initially presented with. Just a recycling bin, nothing else. No AOL shortcuts, no CompuServe trial offers, no Kodak EasyShare links. Just wide open nothingness. Beautiful. After installing I took note of the footprint — a bit over 10GB, or at least that was what was used on my hard drive after installing W7 and nothing else, so take that information with a grain of salt. I started exploring W7 and was impressed with what I saw. The Start Menu takes a bit of getting used to, but many of those things are customizable. I prefer the tiny quick-launch icons on the toolbar, and I like to have a minimum of clutter. Some of the programs like “Sticky Notes”, “Magnifier”, and “Solitaire” I instantly banished from the toolbar. One that did make me happy was the useful little “Snipping Tool” utility (a Vista invention that I had never discovered) which allows you to drag a box around your screen and instantly save the cropped box as a .JPG or .BMP – useful for someone like me who is often capturing things on the screen to share. It saves me from having to open FRAPS, then edit the screen in PhotoShop. 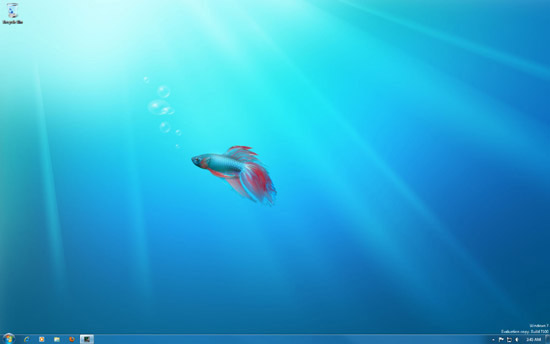 Lots of clean desktop space to eventually clutter up. 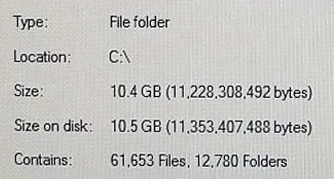 A bit over 10GB is the price you’ll pay for W7 on your drive. 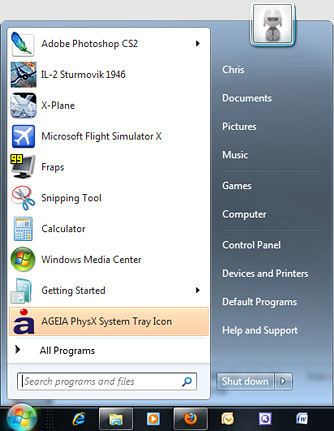 New look to the menu and toolbar.

Another impressive bit of W7 usefulness is the way W7 can automatically connect to Windows Update and find the most recent drivers for your hardware. I was surprised to see that multiple driver updates available for everything from my monitor to my graphics card. The updates are optional, so if you’d rather find and install your own drivers (as most of us will likely do) you can still do that. I’m not sure how long it takes for new drivers to show up on Windows Update but I found newer NVIDIA drivers on the NVIDIA site, but perhaps they hadn’t yet been approved by Windows Update as compatible. 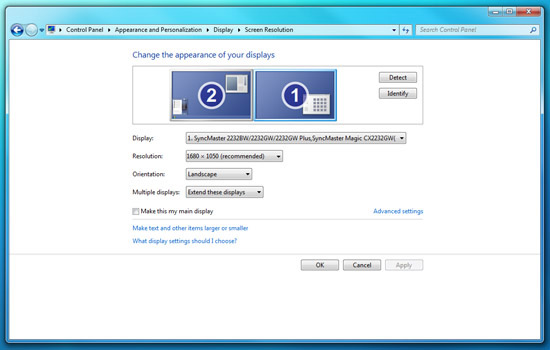 W7 automatically configured and spanned my desktop across multiple monitors. 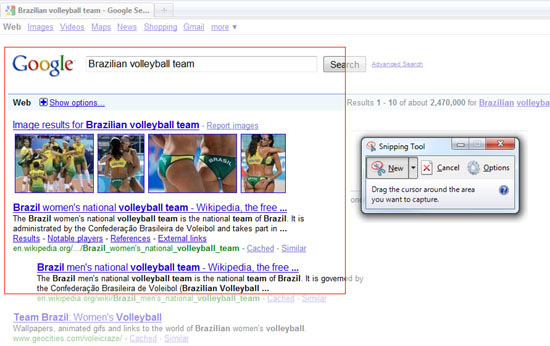 The useful Snipping Tool to the rescue!

The first problem I ran into with W7 was the dreaded User Account Control (UAC) Settings when I tried to move a file from one directory to another. Apparently W7 did not feel that was a good idea and prevented me from doing so. Using Google to look around the Internet I found that for most of us users that want full control over our computers dropping the UAC settings down can be helpful. Is it risky? I don’t know. The more knowledgeable among us will probably state that these protections exist for a reason, but I take freedom over security in all aspects of my life. After adjusting that I’ve had no more bothersome notifications and my world has not come crashing down (yet). 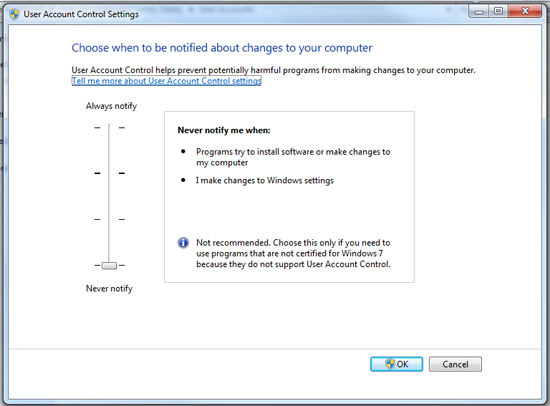 UAC – Set it and forget it.

Somewhat related to UAC settings is installing older programs. So far, I haven’t found a single program that I haven’t been able to run, although admittedly I haven’t gone through the whole inventory that I have. Titles that would not run on Vista are running fine on W7. Indeed, some programs that I could not even get to start the installation process on Vista are up and running fine on W7. For those of us that run legacy sims I think W7 is a huge success. As more and more people switch I’m sure we’ll see issues, but so far things are looking pretty good.

Another thing I liked about W7 is the preview pane when you hover your mouse over a minimized task. This might have been available in Vista (?) but I either didn’t get that far in my exploring, or it had to be turned on. In essence, if you are running multiple instances of the same application (i.e.: several Firefox windows) you can drop down to the icon on the toolbar and a miniature screen of all of the open windows will appear allowing you to choose which one to switch too. Initially I wasn’t sure about this little feature, but now I absolutely love it. 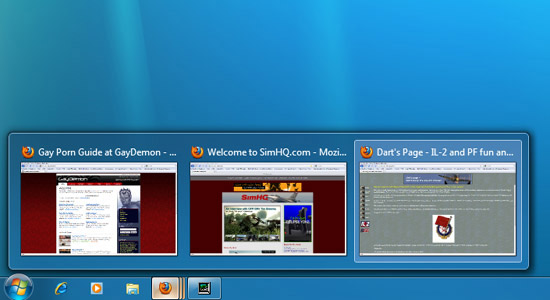 I was happy to see that W7 recognizes even obscure media formats. It appears that W7 even has native support for the DIVX codec which had been problematic for me with previous Windows versions. My JVC camcorder records files in a ridiculous file format that ends with a .MOD extension but W7 must have looked beyond the extension to the actual file structure because it played the .MOD files without any problems. The files are actually MPG-2 format and why JVC didn’t just call them that is beyond me. And no longer will you have the fantastically annoying problem in Vista of scrolling through still pictures only to have the process interrupted by loading of movie files that happen to be in the directory. As you turn every corner in W7 you find that Microsoft must have actually been listening to the complaints about Vista because they’ve really pared down the “help” and made the interface more streamlined. Startup and shutdown times are vastly improved.

Handling of image and video files is well done, even recognizing obscure formats and the popular DIVX codec.

Regarding driver support, it is my general observation that vendors were either prepared, or are enthusiastically lining up behind W7. Prior to release I was unable to find specific drivers for my HP Photosmart 7550 printer, but using generic Vista drivers for a DeskJet printer was their solution until dedicated W7 drivers are released. My Creative Soundblaster X-Fi had W7 drivers ready to go on the Creative web site. Some hardware can use older Vista or XP drivers and I have yet to find anything that won’t work with W7. The most important hardware: NVIDIA, TrackIR, and my Saitek HOTAS all work fine. Undoubtedly there are issues out there, but thus far I’m having a very good experience with my W7 migration.

After installing W7 I went ahead and installed all of the “usual suspects” that make up the basis of my day-to-day life: Firefox, WinRar, FoxIt, MS Office, FRAPS, PhotoShop and Premiere. Once I had this basic core installed I took advantage of the new W7 Backup and Restore Utility to make a copy of my clean+basic utilities installation so that in the future all I’ll have to do is reformat, install W7, then import the backup to get back to a fresh version of my basic needs.

With regards to performance, I definitely think W7 is more efficient than Vista. Without question *I* am more efficient using W7 than Vista because I don’t have to occasionally stand up, walk away from my computer in frustration, and find some soothing green tea to drink. Unfortunately I didn’t sit down prior to the new install and benchmark sims and plot them into pretty graphs (paging John Reynolds!!) to compare XP vs. Vista vs. W7 performance, so the very real possibility of placebo effect exists. My games are running great, my computer hasn’t locked up yet, and overall I’m thrilled with this new OS.

* Note: Some of this article was based on my experiences with Windows 7 Release Candidate 1 although I obtained the actual MS issued release version a week prior to W7 going “Live” and all of the observations hold true.