When hard-core sim racers contemplate opening their wallets wide for a high-end force feedback (FFB) racing wheel, these two fine controllers will no-doubt be placed in direct competition with one another. In recent months SimHQ has penned separate, in-depth reviews on both of these fine products — the Logitech G27 in August of 2009, and the Fanatec Porsche 911 Turbo S with Clubsport pedals in February of 2010. To further help our members with their future purchasing decisions, I decided to let these two high-end racing controllers trade a little paint in a side-by-side comparison.

In order to compare the Logitech G27 and Fanatec Porsche 911 Turbo S with Clubsport pedals (we’ll refer to them as the PWTS/CSP for brevity), I used two games:

The variety of car types and driving environments made for a good test of the two wheels’ capabilities and limitations in a back-to-back testing environment.

With the wheels turned off, I rotated each one to compare how the internals moved. The G27 turns freely and easily due to its well developed gearing system and ball bearings. Despite the new helical gearing, you can still feel the gear teeth mate and de-mate, which adds a vibration to the wheel’s rotation that’s transmitted softly to your hands and ears, like a purring cat. Meanwhile the PWTS wheel’s belt-driven FFB system has a bit more rotational resistance than the G27, but its belt drive FFB system is smooth and quiet, with minimal noise and vibration.

In use, both wheels feel great and are very accurate. The Logitech G27’s helical gear drive is certainly durable and reliable, but as we’ve reported before there’s a “soft spot” just a few degrees either side of top dead center where the force feedback intensity drops off. Although necessary to prevent FFB-induced oscillations, this “soft spot” annoys some people to distraction (but not me). The Fanatec PWTS, with its belt-drive FFB system, also has a minute-but-perceptible “soft spot”, no doubt for the same reason as the G27. As much as some might expect this to be a blowout in favor of the smooth, belt-driven PWTS, both wheels offer the feeling of extremely precise steering and robust array of feedback effects. Both the G27’s mechanical gearing mechanism and the PWTS’s belt-drive system have very firm wheel response which makes for very precise and direct wheel positioning and fast lap times, although the PWTS ‘s response feels more like a real car’s.

The G27 is a fine product, but the laser-crisp, silent, butter-smooth feel and car-like response of the Fanatec PWTS, combined with its wider diameter and fatter wheel rim, push it out front by a nose.

Score this category for Fanatec.

Although not always pretty, the location and ergonomic accessibility of buttons on the Logitech controller are superior to the Fanatec product, which is hamstrung by a need to replicate a real street Porsche’s form factor while simultaneously offering the specific attributes of an Xbox 360 controller. The too-small and imprecise paddle shifters of the Fanatec don’t help, either — here the large steel paddles and precisely-actuating micro-switches of the Logitech G27 are vastly superior as well.

Score this one for Logitech.

The G27 made great strides in precision and accuracy of its H-pattern shifter, but despite these advances it still feels light to the touch, and worst of all hard-core sim racers have lost the G25’s optional (and typically preferred) sequential shifter option. Meanwhile Fanatec offers two separate shifter units — the 7GS H-pattern and the 2GS sequential — to suit their customer’s tastes. While Fanatec’s sequential is a simple spring-loaded lever with micro switches (just like a Logitech MOMO’s), it gets the job done and there’s no mistaking when you’ve initiated a gear change. Ditto for Fanatec’s 7GS H-pattern shifter, which offers positive engagement of the gear detents, although it does need frequent re-calibrating. Offering two shifters with a high-end racing controller is something Logitech could learn from its rival.

Since Fanatec allows its users to have gear shifts “made their way”, the nod goes to Fanatec.

This one is tough to call, because what we have here are two of the best, mass-produced pedal controllers on the market. Both offer a clutch pedal. Both feature adjustable pedal faces. Both have varied resistance levels for each pedal. Both provide superb feel and accuracy in each axis. Although the Logitech pedals are well-designed, offer configuration options and are quite tidy, the more industrial Clubsport pedals have an even larger range of mechanical tweaking options to suit a broader range of gamer preferences, the load-cell brake pedal is simply a more accurate mechanism for metering out brake effort, and it feels far more realistic than a rotating potentiometer. On the virtual track, the CSP’s brake pedal’s load cell response is fantastic. With the pedal arm adjusted to take the slack and rotation out of the pedal, metering out brake pressure in the game is accomplished in a very realistic manner.

As with the wheels, the two pedal kits have nearly identical performance on the track. They are both very accurate systems for metering out brake, throttle and clutch movement. The difference comes down to what feels better to you as an individual. The CSP’s load cell is the more realistic and intuitive control input method, replicating a real car’s braking system more accurately than a rotating potentiometer. The CSP simply provides a more immersive entertainment experience than the G27.

Both controllers get the job done in rFactor and in RSRBR 2009, and try as I might neither controller turned clearly “faster” lap times. InrFactor the PWTS and G27 each traded fastest laps, and were always within a few tenths of each other on any given race session. InRSRBR, however, the G27 seemed to offer the best response to physics engine inputs from uneven terrain, making the wheel a little more buttoned down and intuitive for Rally sims, even though stage times were nearly equal. The bottom line is this: If you were hoping that your purchasing decision could be based on one wheel turning you into the hot-lap king, forget it. These two fine racing controllers turn out virtually identical results in that category.

Here’s a comparison of best lap times for each controller:

If there is a track performance category where the PWTS out-shines the G27, it might be “consistency”. By providing a more detailed feel for grip levels on the track and better braking function, it seems easier to turn more consistent lap times with the PWTS, which will make you faster over the course of a long endurance or oval race.

With nearly identical performance on the virtual racetrack, the overall winner isn’t determined by quickness, but rather by how enjoyable and immersive an experience it provided. Both controllers in this comparison do not disappoint. They both offer an outstanding and immersive racing experience and heighten the performance of any racing sim’s physics engine.

This is a very subjective category. I can only rely on the first-hand experiences of the staff, rather than anecdotal input from third parties. SimHQ applauds Fanatec’s scheme of offering components a-la-carte, allowing consumers to mix and match their purchase to suit their needs. But experiences in purchasing the PWTS were overshadowed by shipping delays and silence from product support, who failed to acknowledge any of my e-mails. Likewise, SimHQ staff racer “Chipwich” ordered an earlier model Fanatec 911 PC wheel, which broke down after a few months of use. Chip’s repeated emails to Fanatec product support when unanswered, leaving him with a big, useless paperweight. Joe Keefe also had product quality, reliability and support problems with his GT3RS wheel. Although Magnum’s shipping experience with the PWTS was smooth and effortless, he soon suffered calibration issues with the 7GS shifter. Overall, SimHQ’s experience with Fanatec Product Support could best be characterized as “discouraging”. Although my PWTS/CSP combo is working well four months on, it would seem that Fanatec’s reliability and product support leaves a bit to be desired.

In contrast, Logitech has a proven record of durability and reliability for the SimHQ staff. My first Logitech product was a MOMO Racing FFB wheel, which was purchased in 2002 and still works reliably to this day as my backup wheel. Likewise, my three-year-old G25 is still going strong, and after months of abuse with Richard Burns Rally / RSRBR 2009, SimHQ’s review copy of the Logitech G27 works like-new. The only issues I’ve had with the Logitech line have been software-related, and every time Logitech Product Support was contacted, the response was quick, accurate and helpful.

If product reliability and supportability are high on your list of desired features, Logitech controllers are your best bet.

As much as we might want to pick a winner here, the comparison is a bit “apples and oranges”. The Fanatec product is fat on features and options, and has some superb design elements, including the unique ability to function on all three sim racing platforms. As you’d expect, all of that comes with a hefty price tag. The Logitech unit also sports some well-thought out design elements, and is packaged for better durability and reliability. And as a mass-produced controller, it benefits more from economies of scale than the Fanatec product. In the end, I paid nearly double for the Fanatec, but now have a tri-platform controller, the only belt-driven FFB wheel, my preferred sequential shifter, and a load-cell brake pedal system. As time marches on, sim racers will find more and more high-end racing sims available on the Xbox 360, making a wheel such as the Fanatac PWTS increasingly necessary. But for now, if you’re strictly a PC (or PS3) racer, the Logitech G27 is more than sufficient (except for the lack of a sequential shifter).

Score another for Logitech.

At the Finish Line 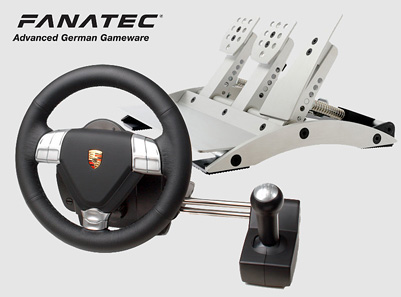 We clearly have two well-matched competitors, each with their own strengths and weaknesses. With seven categories of comparison, each product scored three wins and a tie: Fanatec’s wins were in the feel and response categories. Logitech’s were related to ergonomics, durability, logistics and price. Neither wheel had a clear-cut in-game performance advantage over the other — in fact, the two wheels were in a virtual dead heat on the racetrack. After long term use of both products, I am firmly convinced that each is a worthy sim racing controller. Picking a winner will depend on each consumer’s tastes and budget — which is why the comparison categories here are not weighted. With no obvious winner, the choice will come down to your own individual preferences and values. 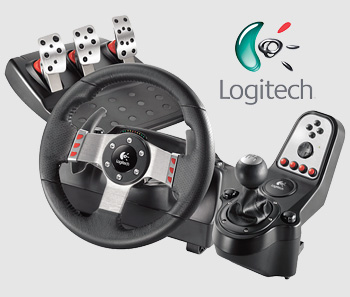 But the vulnerability of the exposed wiring and connectors make them more fragile than they should be, and certainly more so than the Logitech pedals, which while not quite as accurate, precise and adjustable at least seem a bit less vulnerable. Likewise, Logitech’s larger corporate footprint gives it better product support capabilities and a more finished product. And whereas the “boutique” Fanatec products are pricey, the mass-produced Logitech design is less so.

In terms of PC sim racing performance you can’t go wrong with the Logitech G27. It’s precise and responsive in its own right, and has slightly better ergonomics. It’s a reliable and proven performer on the virtual race track. But if you’ve got the disposable income and are willing to risk potentially poor product support, the Fanatec combo provides slightly more immersive and entertaining experience. And if you are ready to explore the ever-growing range of racing titles for the Xbox 360, the Fanatec is your only choice (besides the mediocre Microsoft wheel).

Hopefully the next generation of racing controllers will provide a contest that’s even harder to call. But for now consumers should be very pleased to have these two outstanding products to choose from.