SimHQ first became acquainted with the Wheel Stand Pro product line when Magnum bought one for his Xbox 360 Force Feedback (FFB) wheel in 2009. The company hails from Poland and puts bread on the table by making parts for the hydraulic systems on constructionequipment.

Imagine our surprise when the SimHQ staff happened upon a small, unassuming booth atE3Expo 2010. The company’s products were there because it had established a U.S. distributor, in the form of husband and wife team Dale and Lu Litton. Their small display area had a G27 on a wheel stand hooked up to a PS3 running GT5 Prologue. I had to check it out, especially to compare it to the Rennsport Wheelstand I purchased for my Porsche Turbo S wheel and Clubsport Pedals. Based on my initial impression of the Wheel Stand Pro, I really wanted to give it a go for review, to see how it works with my G25 in my own home office and living room. Dale was eager to oblige.

Shortly after E3 ended, Dale shipped SimHQ their latest and greatest model, the “Deluxe” edition for Logitech’s G25 and G27 wheels. The Deluxe edition has a bit wider stance to accommodate the firmer FFB and shifter of Logi’s top-of-the-line wheels.

The product ships in a neat and tidy package, complete with a parts inventory, required tools (well, not all, you’ll want a ratcheting screwdriver) and a clear and concise instruction sheet that’s easy to follow. Best of all it comes almost completely pre-assembled and folded flat — all that’s really needed are to set the wheel platform angle, bolt on the shifter mount, and attach the wheel, shifter and pedals. Nice! 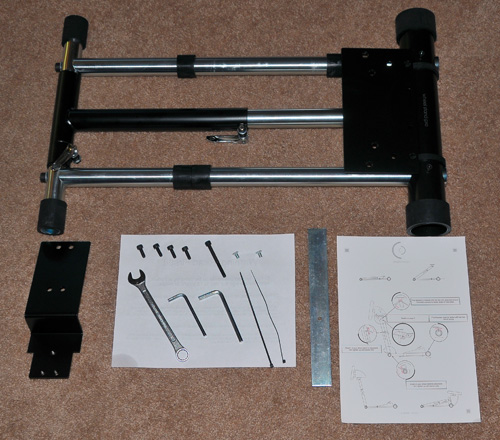 This part goes pretty quick. Mounting plates for shifter and wheel are all pre-drilled and painted satin black. I elected to use some black foam drawer liner cut to shape as a “gasket” of sorts, to help absorb sound and more firmly plant the shifter and wheel to the base plates.

Care must be taken when bolting on the wheel and shifter, as it initially makes the wheel stand a bit top-heavy. You’ll be rotating the stand on its side, and perhaps even upside-down, in order to get all the mounting bolts seated and tightened.

Pedal installation is straightforward, with a backing plate and bolt used to hard-mount the G25 pedal assembly to the Wheel Stand’s base.

One small issue I noted immediately was that while the G25 wheel’s desk clamp brackets will tighten up against the base, the shifter’s clamps can’t quite take a bite on the base plate, so some small wood or rubber blocks are needed or the FFB motors will cause the shifter clamps to chatter like wind-up set of practical-joke false teeth.

Another minor nit-pick is that every wheel stand I’ve encountered lacks any thought to dealing with the cables and the power brick. I gave this some thought on the Wheel Stand Pro and initially mounted my G25’s power brick to the front of the pedal base using double-sided foam tape. Quickly I realized that the power cable that runs from wheel to brick is not long enough to allow this mounting location, so I cleverly repositioned the power brick underneath the pedal base, alongside one of the Wheel Stand’s base legs. As it turns out, the brick’s size is a perfect match for the diameter of the beefed-up wheel stand’s base legs, and it fits perfectly between the pedal base and its wheel stand bracket (see Part 1 video). Even so, this is one area that Wheel Stand Pro designers should apply some creative thought to, as a proper mount for the power supply and its cables adds greatly to one of the Wheel Stand’s primary reasons for existence: self-contained portability.

On the subject of portability, you might wonder “how much does it weigh?” Well, with the G25 and power brick attached, the entire assembly weighs in at a stout 32 pounds. While that’s not an excessive amount, you can certainly get your daily exercise toting it around!

With the G25 wheel, shifter and pedals attached, the power brick mounted and the controller cables tidied up with Velcro straps, assembly of the Wheel Stand Pro was complete. It only took about an hour to get everything ready, most of that time being spent on finding a home for the power brick and tying down the cables. Now it was time to put the pedal to the, uh, plastic. Yeah!

The stand’s bicycle-style quick locks make the Wheel Stand Pro easy to set up and take down. They allow you to rapidly set up your wheel stand and lock the upper arm tightly in place, as well as allowing for quick and easy telescoping adjustment of the wheel and shifter height. That said, the quality of the quick-disconnect handle itself is a little poor — the formed metal handles on the Wheel Stand Pro feel a too flexible and their edges can feel sharp when you put pressure on them — a necessity to get a tight lock on the stand’s vertical arm. I might just go to a bicycle store and buy some cheap handles made from solid aluminum to replace the stock units. 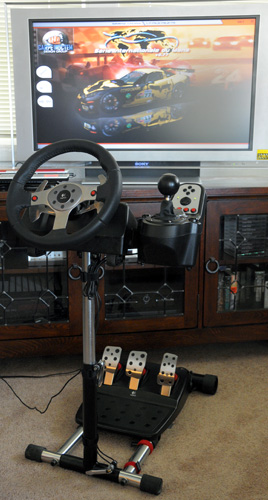 With the stand unfolded and locks engaged, the wheel and shifter are semi-rigidly held atop their telescoping vertical arm. With the vertical arm locked in place and the G25’s components bolted down tight, everything stays exactly where it’s supposed to. The weight of the base unit, along with the pedals and your own feet give the Wheel Stand Pro a center of gravity lower than a snake’s belly, making it virtually impervious to tipping over. While the stand allows for some slight movement of the wheel and shifter when racing, the movement is imperceptible to the operator and doesn’t alter the ergonomic position of the controls — in fact, until I watched some clips for the review video, I wasn’t aware of any movement at all. As far as I could tell, no amount of steering input, shifting or FFB motor operation made the Wheel Stand Pro feel any less than fully planted. I tried the Wheel Stand Pro G25/G27 Deluxe with rFactor, Richard Burns Rally, and F1 2010 — in each case it held the G25 wheel, shifter and pedals nice and steady no matter what was going on with the FFB or driver inputs.

For those without the floor space for a dedicated simulation cockpit, the Wheel Stand Pro is an efficient and capable way to mount your racing wheel. It’s stable, holds all controller components firmly via their mounting points, can be easily moved between PC desk and living room HDTV depending on your gaming choice, and folds up for easy storage. I really enjoy having the flexibility to quickly move my sim racing from home office to living room when the TV is free for some PC, Xbox 360 or PS3 racing.

Best of all, the wheel stand doesn’t take up desk space, so if you need to stop racing and get to work on your PC, you can pull it back from the desk and set it aside faster and more safely than you can dismount a clamped wheel and shifter from a desk. It really is an efficient and ergonomic alternative to clamping your G25/G27 to your desk. I also appreciate not having my FFB wheel mounted directly to the desk, as FFB outputs and wheel movement tend to shake the desk, causing my monitor to wobble.

While mounting a force feedback wheel to a sturdy desk can provide stability, in some cases it can place the wheel at a height or angle that isn’t optimal for gaming comfort, and might even induce strain or fatigue on the shoulder muscles. That’s never a problem for the G25/G27 Gamer Deluxe, as the wheel stand’s pivoting and telescoping vertical arm and base provide ample adjustability in height, angle and wheel-to-pedal distance, allowing the user to tweak the stand’s geometry to maximize comfort and minimize muscle strain.

The wheel stand came in handy during SimHQ’s review of Codemaster’s F1 2010 game, where I frequently switched between the Fanatec PWTS/CSP with Rennsport Wheel Stand and the G25 with the Deluxe stand while wringing out the PS3 version of the game. As with every racing game I tried it with, the stand worked great, and made rapid swapping between racing controllers easy. The Deluxe stand is a very stable platform for the G25 and allowed a lot of flexibility as to where I raced, either in front of my home office desk with 26″ monitor, or in the living room in front of my 40″ LCD TV.