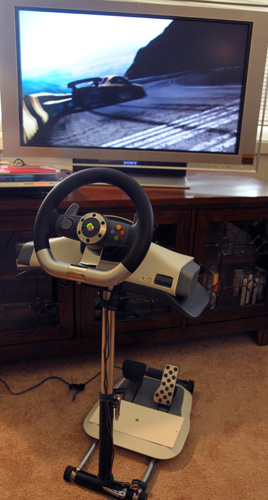 Magnum gifted me his Wheel Stand Pro for the Xbox FFB wheel. Although Magnum actually sent me the stand AND his Xbox wheel fully assembled, I took the time to dismount the gear, clean and check all the components, and reassemble it.

One thing I noticed immediately about Magnum’s Wheel Stand Pro was the accumulation of some surface corrosion on the bare metal tubes, no doubt brought on by Magnum’s location in a coastal town in the southeastern U.S. At first the stand was looking a little scruffy, but my cleaning process quickly remedied the appearance. Still, it might be worth noting for the Wheel Stand manufacturers that their product should have a bit more resistance to hot and humid environments. It should be noted that I’ve had absolutely no problems with environmental degradation on the G25 Wheel Stand.

The Xbox Wheel Stand is a little narrower in track, and uses base legs of smaller diameter piping than the beefier G25/G27 Deluxe stand. Although it does allow for a bit more movement in the wheel stand under heavy use, this product is also very portable and stable enough for any type of driving game. It certainly works great with Forza Motorsport 3, and stows away and out of sight when not in use. It also weighs a fraction of what the G25/G27 Deluxe wheel stand does.

Although I really like my Fanatec Rennsport Wheel Stand, I’d like to see a little competition in the marketplace to improve the breed. I think a Wheel Stand Pro for Fanatec products, particularly one that can hard-mount the robust Clubsport Pedal system to the stand, would be great for the consumer. Ditto for Thrustmaster’s and Saitek’s racing controllers.

Like many sim racers, I don’t have the floor space for a dedicated sim cockpit or complex sim desk/cockpit such as the Obutto oZone. And like many sim racers, I don’t have the budget for a sim cockpit, either. That makes a portable wheel stand an ideal product for me. I am highly impressed by the Wheel Stand Pro Deluxe for the G25/G27. The stand provides a stable base for all forms of sim racing and is quick and easy to transport, set up and adjust. 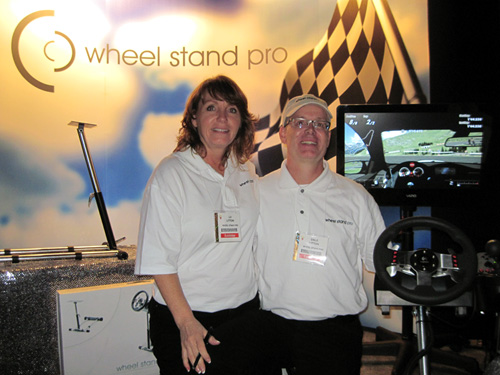 The older stand for the Xbox Wheel was also good, but its narrower base made for a touch of wobble that could be improved upon. As you can tell, I am completely sold on the value and versatility of an adjustable wheel stand for sim racing controllers. The G25/G27 Deluxe wheel stand makes a great companion for Logitech’s flagship racing controllers. I can now highly recommend Wheel Stand Pro’s products, and hope that as they go forward they continue to refine and expand their product lineup. Buying one would make a great holiday gift to yourself. In fact, my check is in the mail to purchase my own Wheel Stand Pro G25/G27 Gamer Deluxe!