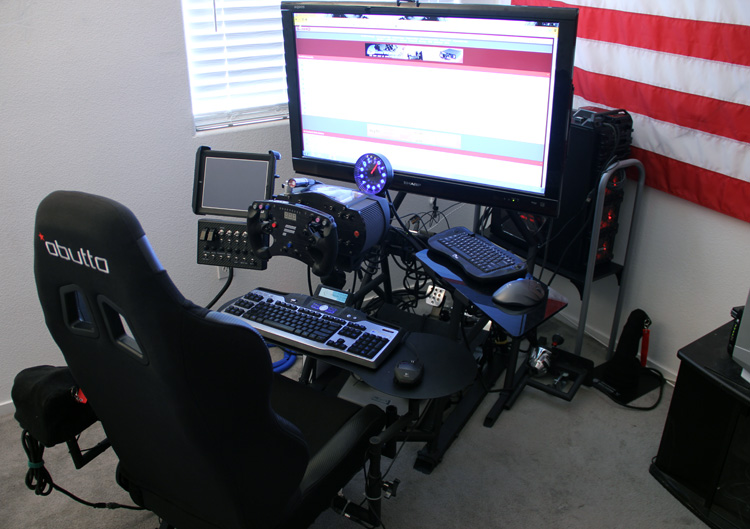 Is your desk cluttered with papers, pictures, camera accessories, a racing wheel, racing pedals, flight stick/yoke, HOTAS, rudder pedals, keyboard, and mouse? I know mine sure was, never had enough room to do anything. Something was always in the way. In 2008, I started on a project to build a replica F-16 cockpit as I was heavily into the Falcon 4.0 series. Over the next 2 years, I purchased various components for the homebuilt cockpit, but I quickly discovered a problem that I did not see coming. I had mainly been interested in modern combat flight sims and took to the consoles for my motorsport desires. 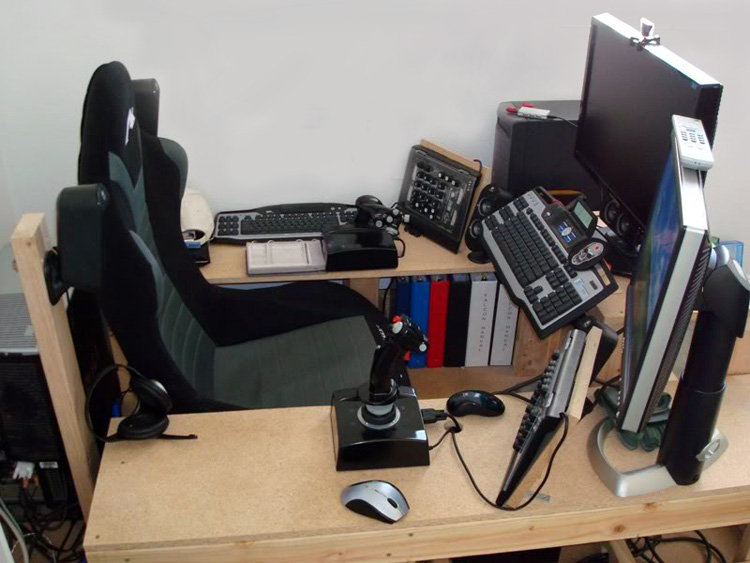 Getting the Cockpit Bug

After my first trip to E3 in 2010, I became interested in racing titles on the PC, especially iRacing. It was then that I discovered my project of building a replica F-16 cockpit would not fit my needs for flight and racing. If you’ve had the opportunity to be up close to an F-16 you know that it does not have a whole lot of room. So attempting to fit a racing wheel into the cockpit would be a nearly impossible challenge, especially if I wanted to maintain a replica F-16 cockpit feel. I halted the plans on the F-16 and began looking for something that would fit a racing wheel, racing pedals, a HOTAS, and rudder pedals.

Many of the cockpits out on the market were tailored to one genre, it was racing or flying or shooters, but not all three. It was apparent unless I designed something myself, a cockpit equally adept at flight and racing sims was doubtful. Honestly, I did not want to go back down the homebuilt road again. It took me nearly three years to acquire what few pieces I had for my F-16 build, and did not want to start on another project that would take me so long to complete.

“guod” gave SimHQ readers a taste of the Obutto oZone Gaming Cockpit in his September 2010 review. He went over the pit from it arriving at his door, through construction, to him using it while playing various genres of games and simulations.

Finally, something was available on the market that should fit my needs in the form of the Obutto oZone Gaming Cockpit. With responsive feedback from Chris Dunagen, President of Obutto, in the review discussion thread I was sold. Nothing else would steer me away from purchasing the Obutto.

But something did stop me — unemployment from the bad economy. I would not manage to purchase the Obutto oZone until a year later when the stars finally aligned with the economy and I had secured a job.

After purchasing and using it for several weeks, I knew I had made a wise investment. I did not need my couch or bed anymore, the chair was that comfortable — I would not sleep in it but I could easily nap in it. It was not long after my purchase that the initial news about a new Obutto cockpit was. I thought, “hmm, I really like this oZone, what could possibly be better?” Once the full press release was out with pictures of the new R3Volution, I could see that the new Obutto was a significant overhaul of the oZone cockpit. 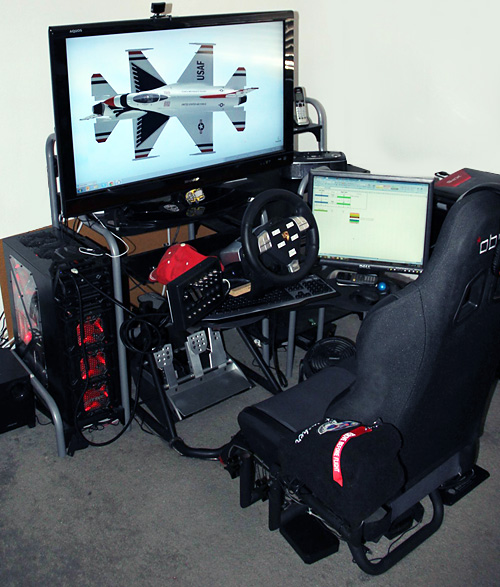 For this review, I asked Chris Dunagen to reflect on the new cockpit’s legacy…

“When I first designed the Obutto oZone cockpit I really only had 2 needs at the time… an easy way to run around a track in a cool old car (GT Legends), and then easily switch to using a keyboard and mouse for some Day of Defeat killin’. The oZone met those needs with flying colors but with nearly every production run I would change angles and make some other larger changes to try and make it better each time.

Around 3 years ago we started working on a new design cockpit, the idea was to come out with an oZone replacement at the time, but use our own 6+ years of using the cockpit every day for work and gaming, along with all the feedback we received over the years from customers, and produce a wicked new cockpit that not only performed better, but also looked really cool. Anyhow, after hours & hours working on the computer, cutting metal at all different lengths and angles, and just came up with nothing hah! So it was sidelined as we continued to tinker with the oZone.

Finally, around 2 winter’s ago we came up with a design that looked cool on the computer. After spending all day till late at night at the factory freezing our butts off (factories around here have no temperature control), we had the prototype built…. well, mostly. A couple of days later I had to get back to US so I brought the frame and monitor stand with me and spent the next 1.5 years play testing the new cockpit. When I’m in the US I typically spend 6+ hours a day in my cockpits working and goofing around on the Internet, and then another 4-5 hours a night gaming with some pals. The result was the cockpit performed great but needed some minor changes.

In the meantime, we had been very busy setting up our own factory in Beijing, and during this time we brought the prototype back to China and began working on changes. Stiffened up the steering wheel mount, completely changed the rear frame section, designed the tabletop arms, triple mount arms, etc. Due to the crazy angles of the cockpit, it’s a major pain to manufacture, well when you’re doing everything with non-computer controlled equipment. Therefore, we made jigs for every cut, every hole drilled, and every spot weld. In the end it became apparent we couldn’t replace the oZone as the cost of manufacturing was just too high.

Therefore, we decided to offer 2 cockpits, the new R3Volution cockpit would be our “higher end” model, and our oZone, which still sells very well, would remain our main cockpit priced for most gamer’s budgets. Although the r3v is our higher end cockpit we kept with our Obutto way and priced it quite reasonably. The only thing comparable would be buying a new computer desk and a high back office chair, which would cost more than our cockpit and not be as comfortable to use.

I’m very, very pleased how the cockpit has turned out and so far all the of the customers I’ve heard from love their new Obutto R3Volutions… and that’s what it’s all about.“

Like the oZone, the R3Volution is available in the base unit with 3 optional accessories: the add-on acrylic table top package, the flight controller package, and the triple monitor mounting.