The next sim I ran through its paces with the HOTAS Warthog was IL-2: 1946. The profile included with the TARGET software was, in my opinion, poorly designed. I realize that each user will have individual preferences for what they assign to their controller, but the pre-made profile wasn’t even worth using as a starting point. You’ll be much happier sitting down and spending some time either in-game or in the TARGET software working out your own specific profile to tailor the buttons and switches to your personal preferences. The HOTAS Warthog worked great with IL-2 although it is a bummer that you can’t assign the split throttles to control multiple engines (unless there is some advanced way of doing this with the TARGET scripting software that I am not aware how to accomplish). IL-2 is one of those sims where I feel that force feedback really shines, since you can often ride up to the stall burble and start to feel it in the stick. As a result, for IL-2 the FFB feature of the Logitech Flight System G940 may override the precision and sturdiness of the HOTAS Warthog. Since I’m not a hardcore IL-2 flyer though, I’ll leave that judgment up to the community.

Next up on the list was FSX. I was surprised that there wasn’t a default profile included with the TARGET software since Microsoft far and away has the largest user community when it comes to flight simulation. With detailed add-ons such as the Aerosoft F-16 or theVertical Reality Simulations F/A-18, it is hard to believe that Thrustmaster overlooked this crowd. It is nice to be able to use the split throttle capability in FSX and you would have to struggle to find an aircraft within the MSFS stable that couldn’t put the toggle switches on the throttle base to good use. Again, though, it is worth mentioning that you’ll have to remember that whatever control you assign to the proprietary named switches (such as EAC ARM/OFF) must be memorized since you can’t re-label the switches. The HOTAS Warthog worked well with the default FSX Acceleration F/A-18 although you could just as easily suspend your disbelief a bit and utilize the HOTAS Warthog with any aircraft that utilizes a center or side-mounted stick. Even flying the Airbus with the HOTAS Warthog seemed “right” despite having a multitude of buttons that aren’t on a real Airbus side-stick.

Following up on the civil aviation side of things, I loaded up X-Plane 9.x and reveled in the fantastic interface to setup the HOTAS Warthog controller. X-Plane’s controller interface is a great example of how to make it easy to setup a controller’s axes and buttons. The friction adjustment slider axis is extremely useful for some X-Plane aircraft that have infinitely variable controls (ie: prop RPM, wing sweep, nacelle rotation, etc.). Setting starters and fuel cutoff to the switches on the HOTAS Warthog base is a breeze. For a neophyte Thrustmaster TARGET user, it is nice to be able to do much of the HOTAS programming in-game. 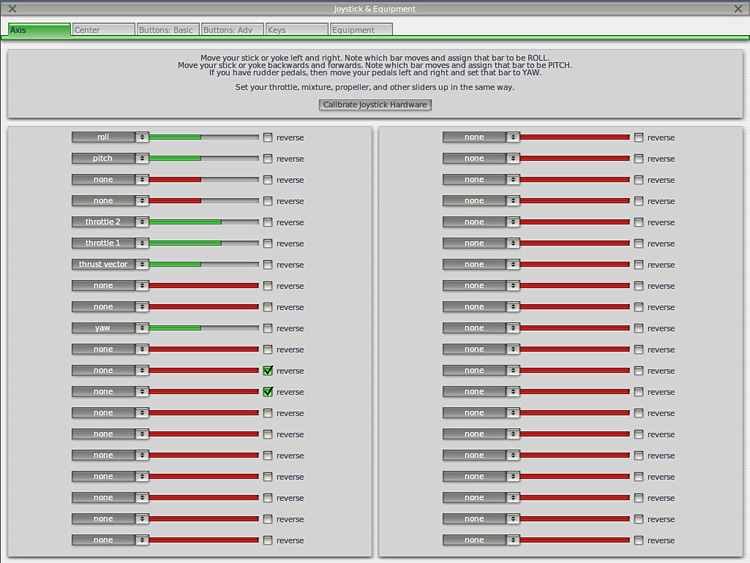 In summary, as a veteran PC flight simmer coming from Saitek hardware and trying on a Thrustmaster product for the first time, I was extremely impressed with the HOTAS Warthog. The solid feel and life-like button and toggle throw forces lend an air of precision and authority that other controllers just can’t match. The smooth action of the Warthog ball joint and sensors gave me an unprecedented feel of precision when lining up cannon and rocket attacks.

I’ve always been a very happy fan of Saitek products, and I do feel they give a great bang for the buck. If you can afford it though, I highly recommend picking up a Thrustmaster HOTAS Warthog since it represents the pinnacle of flight simulation controllers to date.