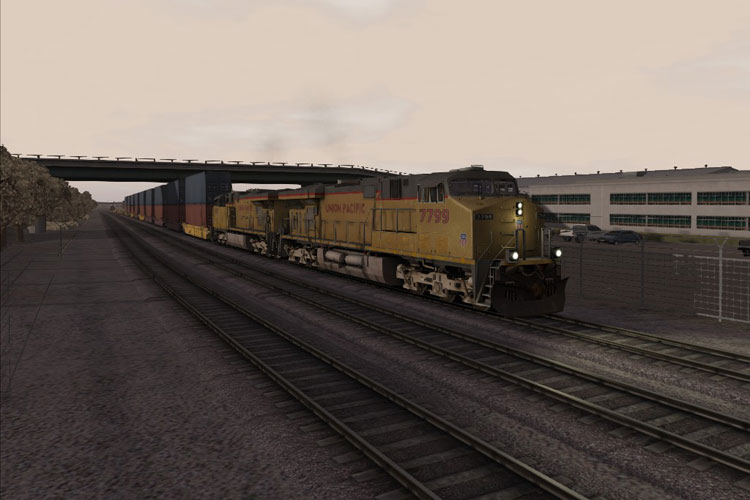 In this segment I’ll talk about how Train Simulator 2012 looked at a variety of settings, share some comments about performance, and anything else I noted along the way.

One of the most visually exciting graphics update for me, are the dynamic shadows. Even on lower settings, these add a pleasant realism to the world outside and inside the locomotive cab. Many objects will cast a shadow over the terrain, on other objects and buildings on the terrain, on the trains, and through the locomotive cockpit. Increasing the quality settings, the detail of these shadows improves (meaning how closely they represent the shape of the object casting the shadows), and the distance that these shadows are drawn is farther away. The higher settings appear to have an additional smoothness to the shadow edges.

Sitting in the locomotive cockpit and watching shadows from overhead wires, signals and frameworks pass over the interior is very immersive. On “Medium” or higher settings, even small tree branches will stretch across the interior and I have watched raindrops on the windows cast shadows on the interior, then be wiped away when I turn on the wipers. Seeing shadows from my own train, or passing trains fall over one another, or buildings or other scenery is a joy.

On my PC, there were a few drawbacks. First, performance. Even “Low” settings causes a visible performance impact, though I am able to use “Medium” settings most of the time and still enjoy decent playability. Secondly, on medium and lower settings, there is a tendency for the shadows of some smaller objects to appear a bit “blocky” and to “dance” or shift constantly as the scene is moving. With the scene stopped or moving at a pretty good speed, I thought this was less noticeable. However, when moving at a crawl through a railyard, sometimes the entire screen seems filled with pretty distracting shadows shifting and jumping in place. With “Medium” settings or higher, this problem is a bit less obvious, but still present.

There were other instances where the shadows did not appear to be optimized, such as within some of the locomotive cockpits, where the shadows didn’t appear to fall through the windows, but instead through the entire area of the walls. I won’t call this too much of a foul at this point: I am using a prerelease version (still marked “beta”) of the software for this review. And I know there is work going on still. Twice during this writing, Steam downloaded updates which fixed a few minor issues I had spotted.

The new light system has a special interplay with the new shadows. Turning on the lights will result in scenery casting shadows which stretch away from the train’s light, and of course these move as the train rolls past. Sometimes the train lights appeared to be a touch bright during daylight hours, creating an obvious illuminated spot on the ground even in broad daylight.

Turning on the light does seem to slow down performance on my PC in some scenes, and with good reason, considering the detailed effect.

Another great addition for immersion. This effect is well done, and adds nicely to the experience. The drops simulate a refractive effect, and will build slowly (almost unnoticeably) when rain sets in, and will of course wipe away when the wipers are on. Turning off the wipers allows the drops to slowly accumulate in the clean area again. While parked, there are streams of water flowing down from the roof, and at speed some of the drops blow back with the wind. Some drops rolling down the glass will take a realistic meandering path. When the weather clears, the drops will dry from the windows over the course of several minutes time.

I was not able to find a menu setting that disabled this effect.

At settings below “Medium” the water shaders are rather ordinary. But at “Medium”, the water has a very nice animated surface with sparkles and reflections of the environment. At the “Highest” settings I had a minor performance impact, and the water took on a greater feeling of depth. 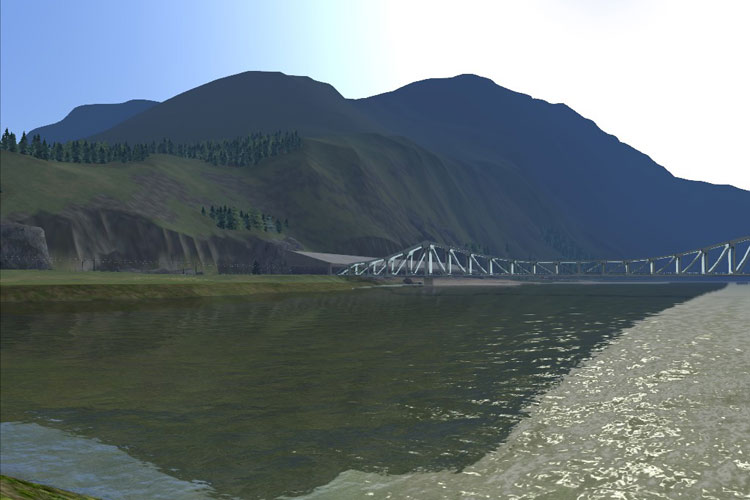 The water set on “Medium” settings has a very realistic surface.

As briefly mentioned before, this effect adds a sense of inertia to the player’s perspective. During turns, acceleration, deceleration, the players view will slightly shift within the cockpit. By and large, I thought this was an enjoyable effect, generally convincing and tasteful in appearance.

I was not able to find a menu option to adjust or disable this effect.