The majority of my gameplay time was spent in the various scenarios within the “Sessions” menu. Most of these scenarios are very approachable in their presentation, though this doesn’t mean they are all easy. Starting up a scenario offers the choice of DCC or Cab Control, and from there usually opens with a text dialog providing an overview of the scenario goals and conditions. Often these text dialogs are chained together, with the appropriate text dialog appearing automatically as the scenario progresses. Tasks vary with the situation, and include things like picking up and dropping off freight cars, or maintaining a schedule between stations along a route. Often, the track switching, signals, and AI trains in these scenarios are all preset for the player as they progress. 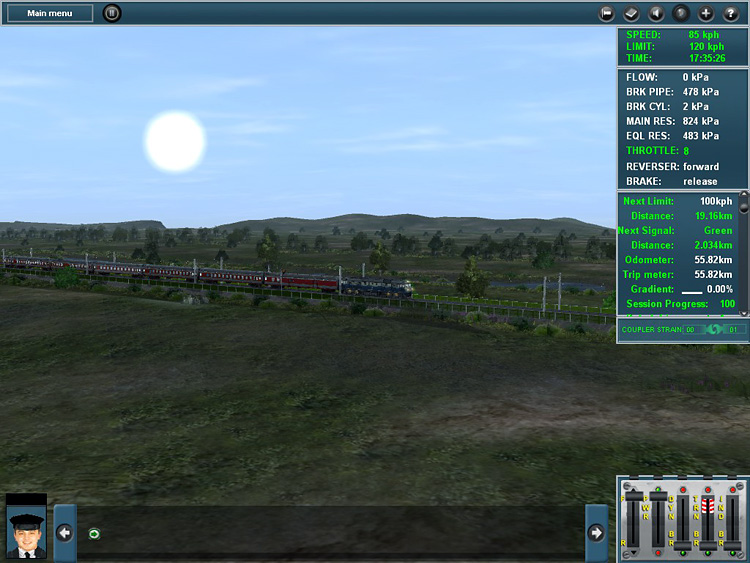 Along the expansive and beautiful Southern China route.

While working through a scenario it’s helpful to check the map view to find the where the next stop or activity will take place. And while the map certainly is useful in this regard, there were a handful of times that I found myself feeling like I was searching for far too long, actually struggling to locate something. Many of the map labels are similar in size and can blend together when searching through a large rail yard with dozens of sidings, or even trying to find the next passenger station stop. It would be terrific if there were larger markers to identify key points in the scenario, or even to name cities along the route in a larger font that’s visible when zoomed out. Such labels would have been particularly helpful on the NEC Wilmington session, where after the stop at Wilmington the text indicated that I should continue south to Baltimore. While waiting at the station I searched the map for several minutes looking for my next stop in Baltimore, but never found it. Finally deciding to continue south and see what happened, the scenario ticked complete while I was rolling, with the later stops at Baltimore and beyond being imaginary.

Those issues aside, all of the scenarios I played were enjoyable. Saving my progress mid way through a longer scenario and picking up again later was easy, though occasionally the time required to save my session would run to minutes on end. I particularly enjoyed the active supply and demand system that some of the industrial scenery uses, with visual indicators on what resources are available to be loaded for transport, as well as the supply on hand for resources being unloaded. It would be great if there were two or three more of these nice scenarios per route.

Beyond the scenarios in Trainz Simulator 12 are play options such as “Quickdrive” and multiplayer sessions. The “Quickdrive” sessions are easy to set up (for the consists that include a locomotive!), and let the player quickly explore or drive a favorite part of a route in any preferred weather or time of day. But the experience is a bit more thin of course, as there are no preconfigured AI trains and no specific timetables or objectives. For experienced players who know the route and stops they would enjoy, this would be less of a problem. 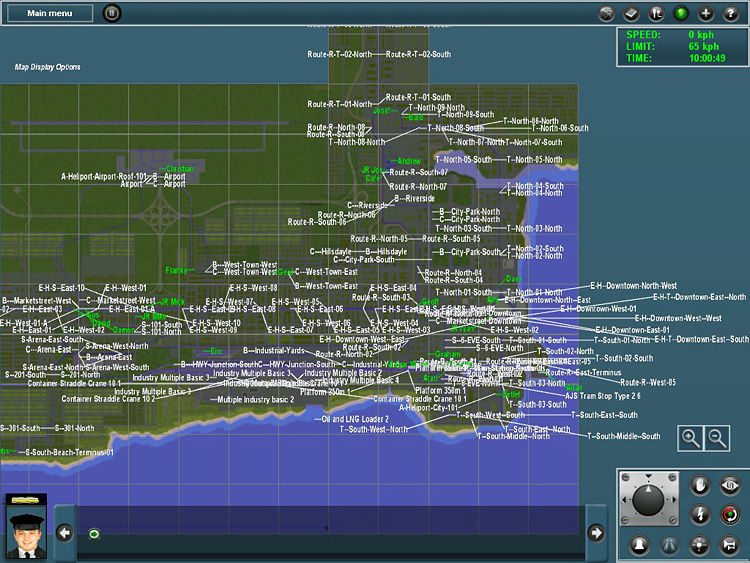 The map view can sometimes be difficult to navigate.

The internet based functions of Trainz Simulator 12 include not only downloading content and multiplayer, but chat and content updates as well. All of these aspects are centrally managed under the “Planet Auran” website and login. Players create an account through the Planet Auran website and link their CD key, then enter their account information into the software to enable online functionality withinTrainz Simulator 12. The account information is detected and verified automatically on launching Trainz Simulator 12, and the various online features were ready and waiting on the main menu.

From the startup splash screen, clicking on “Content” opens the Content Manager v3.5 application. This multi-tabbed window is the hub for searching, downloading, and updating content. This includes updates for content included with the Trainz Simulator 12 product, plus a vast selection of third party content such as locomotives, scenery, scenarios, and even entire rail routes. Descriptions and previews are given for most of the more than 200,000 items listed on my account. I was able to select and download a few items with ease, and they were all installed and ready to use once I started Trainz Simulator 12. 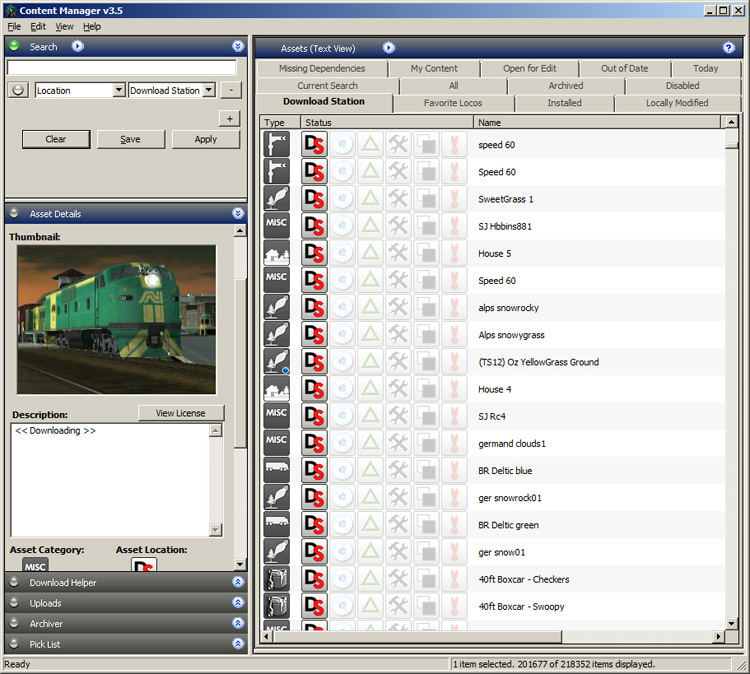 The Planet Auran system uses a two tiered access for this content. The access included with Trainz Simulator 12 is the default, with lower speeds and data transfer limits. In my testing, I saw between 5 and 8 KBps reported during downloads, though I did not see any specific speed limit quoted. The Content Manager application reported a 100MB per day limit, as well as my used portion for the day. This can be upgraded through the Planet Auran web store using the Trainz FCT product. The “First Class Ticket” is advertised as providing guaranteed connections and speeds up to 100x faster, and is sold in 3, 6, and 12 month lengths, or as a lifetime ticket.

The multiplayer aspects of Trainz Simulator 12 include both hosting and joining sessions, which offer players control of the various trains within the session, plus AI trains for added interest. The included chat window allows communication with others who are in the channel, and this separate window can be dragged and resized as desired. Rail routes and sessions must be designed to include multiplayer functionality, and none of the routes or scenarios included with Trainz Simulator 12 appear to be configured out of the box. There are many multiplayer routes and scenarios listed in the Content Manager application available for download, those I randomly queried reported to be around 80MB to 100MB or so. Since these all appeared to be third party content, in the spirit of keeping this review focused on the Trainz Simulator 12 package itself I won’t include third party content or my experiences with them in this article. Suffice to say that the Content Manager worked as advertised, and was very easy to navigate and use.

Trainz Simulator 12 allows graphics options in DirectX and OpenGL, with built in antialiasing, resolution, and similar options from within the configuration dialog that is launched from the initial Trainz Simulator 12 launcher window. I tested both DirectX and OpenGL and saw similar results with each. Once within Trainz Simulator 12, an additional options menu allows further adjustment of finer details, such as fog and view distances. Preferences here may vary, and are easily changed depending on the player’s computer performance on different routes. 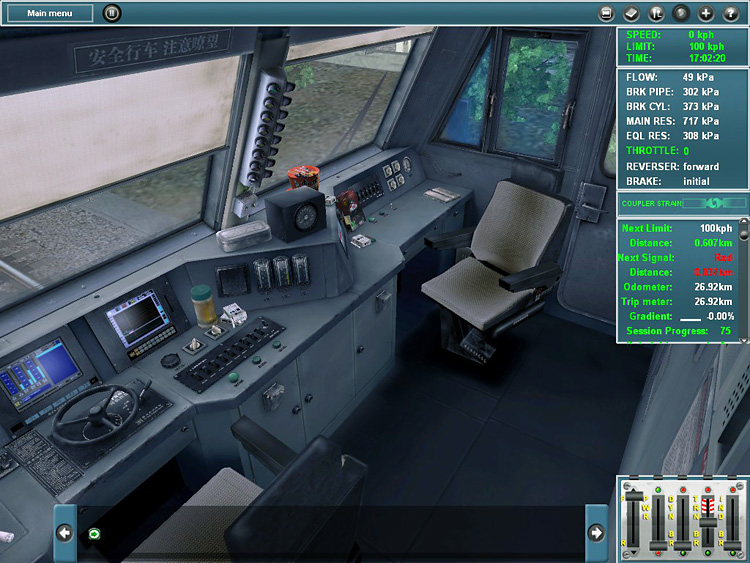 One of the beautifully modeled and textured locomotive cabs.

Graphically speaking, Trainz Simulator 12 was able to look quite good on my lower spec PC and still be quite smooth. A good part of the routes and trains are very good looking, perhaps not the very latest graphics technology, but still quite nice. The nicest locomotive cabs feature well modeled controls and details, a sometimes several operational parts such as sliding windows and opening shades on some models, as well as nice sharp textures to complete the package. The best looking routes have a very full and rich scenery, smooth and flowing terrain, and are dotted with little animated details throughout. Dozens of cars and trucks travel the roads, as well as people lining the station platforms and sidewalks. Each route is themed for a time period, with many period correct cars and buildings. Further interest is created by the many (many!) and varied real world brands that are spotted along the way. Fast food, moving van and freight companies, even beer and model airplane advertisements. Rolling through a town and seeing these familiar brands adds to the sense of realism within the scene. Add on top of this the thousands of beautiful trees by SpeedTree, which themselves are nicely detailed and animated, and look fantastic stretching across the landscape.

There are some visual quality differences between a few of the routes and some of the locomotives and rolling stock that are included. On a few of the maps, there are some scenery pieces and textures that are obviously lower resolution and they tend to stick out as a result. The same is true with the trains, where a few locomotives and cabs may appear markedly blocky and have lower resolution textures than others. 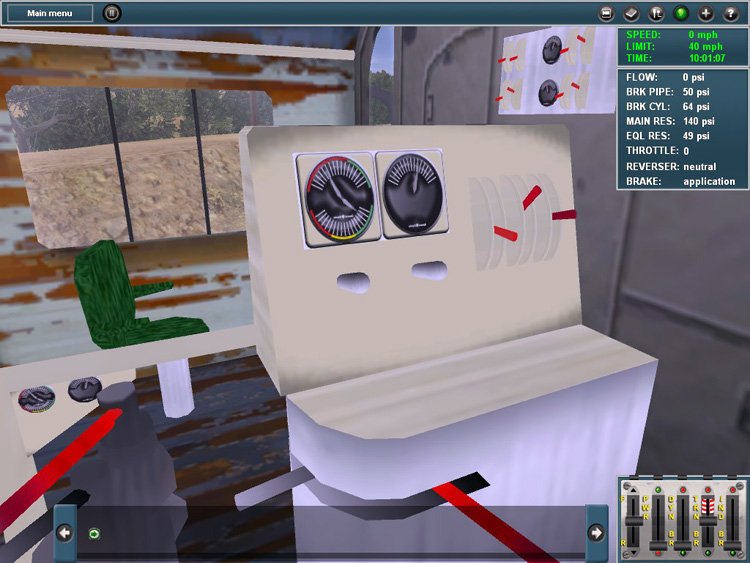 One of the lower detail locomotive cabs.

Performance has been very good, even with most of the options sliders set toward the right and level 2 antialiasing running. There are a few segments of routes with very heavy foliage or the largest city areas where my PC saw a mild slowdown or was briefly choppy. This was uncommon however, and did not really interfere with my enjoying the action. Trainz Simulator 12 has, for me, been very stable and did not suffer from long loading times.

The audio presentation within Trainz Simulator 12 takes a very simple approach with no music in the menus, focusing instead on the sounds of the trains themselves. Engine sounds are nicely done, and from within the locomotive cab there is a satisfying roar as the power is brought up. There are occasional sounds of what appears to be slack along the length of the train being pulled out, and the distinctive clicking of the train wheels crossing switching points. Overall a convincing sound stage. If there was one weak point, it would be that the train horns sometimes seem quieter from within the cab than I would imagine. Occasionally the horn sound would nearly be lost in the roar of the locomotive. I must admit that have never been inside a real locomotive cab when the horn was sounding, however.