By and large, the flow of gameplay is quite straight forward once you know what you are doing. The menus and dialogs are functional and generally didn’t feel like they were in my way. There are a few elements that seemed bothersome though. I’ll briefly comment on each. 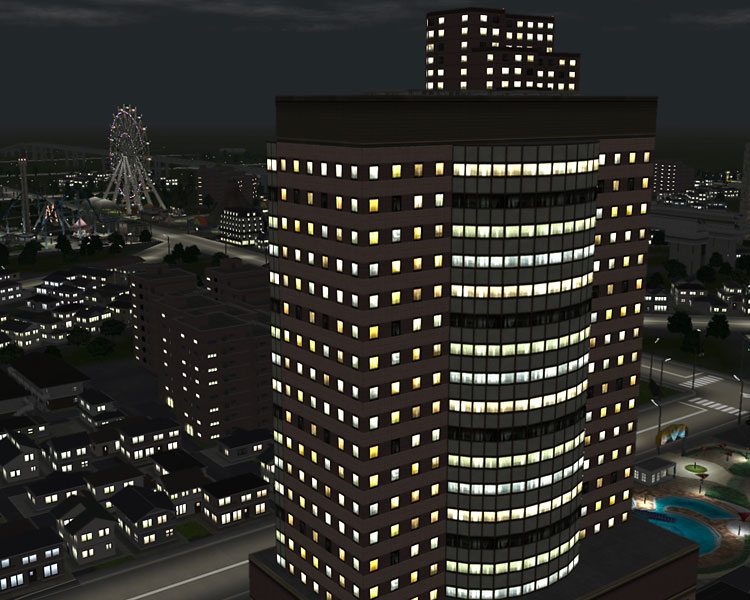 A variety of entertainment for the evening.

Trucks and buses travel over roads, making stops at traffic signals and stations as they go. Each vehicle also follows a player configured route, controlled by small arrows on each intersection determining which direction a vehicle will turn. While this system is functional, it does require a “follow the maze” sort of process to discern exactly the route a vehicle will travel, even while using the “Wizard” tool. It would be infinitely easier if a solid visible line could appear along the route created by the intersection settings, revealing the route and stops at a glance.

Trains can operate over shared track sections by means of junctions and switches. I have not been able to find any way to add signals along the route, however. This means that sometimes one train will be past a junction and stopped at a station, and another train will be inbound to from elsewhere to that same station will pass the junction and block both itself and the other train at the station. Having a signal that would show “RED” when another train was ahead would stop the inbound train at the junction, until the other traffic had cleared. Interestingly, traffic signals are available on the roads, I just can’t find them on the rails.

Finally, there are some additional financial elements within The Train Giant which simulate banking, loans, and stock market investments. On some of the easier scenarios, the stock market showed very high volatility over fairly short periods. This let me easily buy very low, and then sell very high, earning incredible profits using only a portion of my cash on hand. This had the feeling of being a bit of an exploit, especially when 15 minutes worth of trades could earn more than a billion in profit, far and away more than my company operations could return in hours of gameplay. A few other scenarios appeared to have less volatile markets, so perhaps there is some variance here. 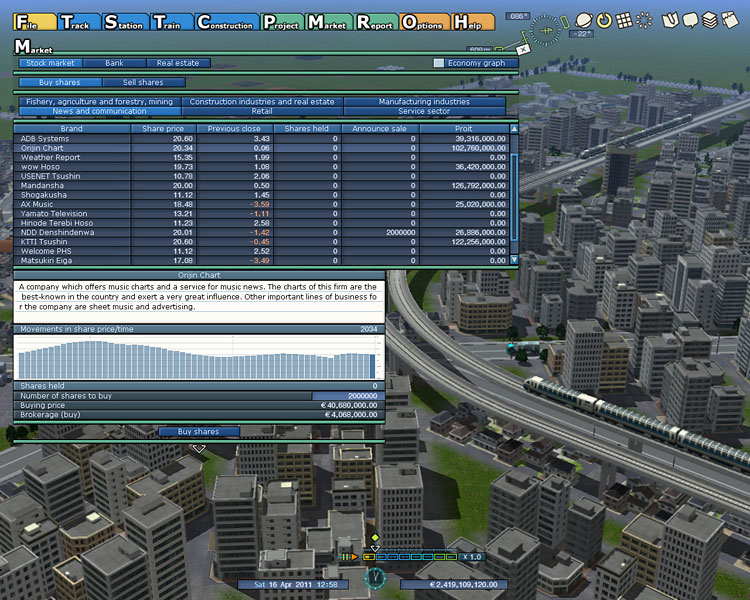 Looking over some investment reports.

The Train Giant draws a beautiful world, with changing atmospheric lighting colors and shadows that stretch across the city. There is a large variety of buildings, and all are nicely detailed even when the camera perspective is down at street level. There are a plethora of graphics options available, both performance oriented, and those which may be user preferences, such as drawing a grid on the terrain. Modern visual effects such as bloom and built in anti-aliasing can be toggled, as well as changing atmospheric coloration as the time of day passes. 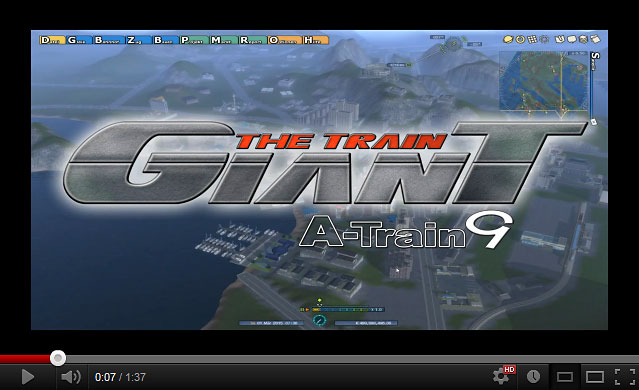 This promotional video shows the beautiful graphics of The Train Giant.

There is a certain serenity in watching The Train Giant as morning dawns and the sun rise through a day before sinking again. As night falls, the buildings and lights illuminate making the city seem to come alive all over again. Early morning hours show the window lighting progressively turning out as residents go to sleep before the next day. Using time acceleration creates an interesting compression of this process, where the city shadows will stretch through the day in a rapid arc and immediately burst into the glowing night lighting, all in just seconds per cycle. The only traffic visually rendered in the city are those trucks, buses and trains that the player owns, plus the occasional ships at sea, or aircraft if such ports exist. There are no models of people moving in the city, but the world seems vivid and alive, just the same. 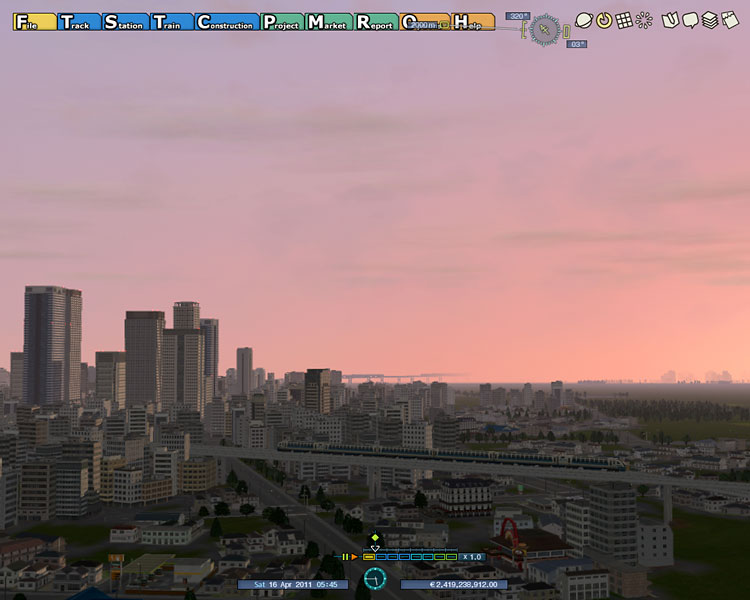 Sunset beyond evening trains leaving the city on the elevated passenger line.

The sounds in The Train Giant consist of some light menu operations sounds and a scattering of musical pieces. The music is mostly synthesized orchestral instrumentals, some with a tint of jazz or other themes, and in my opinion are pleasant background listening. Starting a new or saved scenario introduces the scene with a brief orchestral piece that sets the tone for the busy industry awaiting the player. At odd intervals during gameplay, musical pieces will play for several minutes before fading back to the quiet soundscape of the world.

That soundscape is filled primarily by the sounds of vehicles making their way through the city, and some subtle sounds of nature. Mornings sometimes are welcomed in the country by a rooster, and in the city with a couple of permutations of the Westminster Quarters. Near a few buildings, such as amusement parks, there are faint sounds of related activities.

Included with my review sample was a copy of the new Shanghai DLC. After installation this DLC appears as a saved scenario file under the “Custom Game” menu. The DLC includes a very basic 2 page PDF start-up guide, as well as over 200 new vehicles, most of which appear to be various trains. The Shanghai scenario can be either played or edited by the player.

The Shanghai scenario is built on a custom map which models along it’s northeastern corner the Yangtze River, and is divided in half vertically by the Huangpu River. From the edge of the Yangtze, the map continues south through approximately the Xuhui District. The Shanghai scenario begins very well developed, presenting the player with a large and detailed highway system and a recreation of the Shanghai Metro urban rapid transit system. A large part of the terrain is pre-developed, though ample room is provided for growth and construction of projects such as an airport and Maglev routes.

An animation showing the time of day changing in Shanghai.

The focus of of gameplay is optimization, with routes and timetables for the Shanghai Metro needing to be tuned for maximum profit. Encouraging growth will require establishing a network of goods warehousing and delivery, either from the existing Port of Shanghai or from new materials factories. This DLC map should provide a nice depth and variety of gameplay for an reasonably experienced player. An added bonus is that the 200 additional vehicles are available in any other scenarios as well.

The Train Giant is an interesting mix of business management, urban development, and transit simulations. While grasping the depth and impact of the various aspects of gameplay took me a few play sessions, the time spent in learning and exploring the nature of the simulation paid off in an enjoyable experience. There are a few elements that would seem to benefit by improvement, such as truck and bus routing, train signals, and the documentation. But none of those things were enough, singly or together, to prevent me from getting into the action and enjoying myself.