Under the micro-management style of play, units will follow their orders as precisely delineated with few exceptions. The player can set the Doctrine and Rules of Engagement (RoE) for units individually or for all units under his control. The Doctrine and RoE will help determine the units’ behavior such as when to re-fuel, return to base, or evade missiles as well as the Emissions Control (EmCon) status which governs whether or not unit uses active sensors like radar, electronic jamming, and sonar.

There is a significant behavior that is almost beyond practical player control: Automated Air Defense. When a unit detects a threat from hostile aerial units or missiles, the unit will undertake all necessary measures consistent with the protection and preservation of its integrity. This means defensive missiles and their associated fire-control radar systems will activate automatically. These actions often result in the exposure of previously hidden units through their electronic emanations. Also, the automated responses can squander precious weapons on targets deemed unworthy or unnecessary by the player. (As a side-note, Harpoon3 also had a mandatory automated response at one time. However, the developers recognized its severe and detrimental shortcomings and wisely returned overall control to the player in subsequent versions.)

CMANO players can disable the default Automated Air Defense behavior. (H3 players might recognize this act as enabling the Weapons Tight status globally.) However, the CMANO cure may be almost as bad as the illness and only partially deactivates this automated response. To do so, the player must:

With hundreds of units in some scenarios, this can mean hundreds or thousands of clicks just to turn off this single undesirable behavior. To return units to the default Weapons Free status in CMANO, simply repeat the same few hundred clicks. (In comparison, Naval War: Arctic Circle (NWAC) and H3 activates / deactivates Weapons Tight status either via two mouse-clicks or a single hot key stroke.)

Users should note that the Hold Fire setting only prohibits physical weapons release. Units will still freely activate radar, sonar, and ECM (jamming) systems thereby revealing their presence to the AI opponent (although it is still a mystery as to how active sonar supposedly helps a unit defend against aerial attack.)

Players unwilling to micro-manage their assets can cede control to the AI via the Mission Editor. This feature allows the player to create various Missions and assign his units to them for the AI to conduct. These missions can include tasks such as Combat Air Patrols (CAP), Airborne Early Warning (AEW), Strike, or Anti-Submarine Warfare (ASW). Once assigned, the AI will attempt to perform the missions according to its own pre-programmed behavior as well as the Doctrine settings. Units assigned to Missions will be under AI control. The AI will determine all aspects such as throttle settings, altitude, sensor status, approach path, and every other factor. 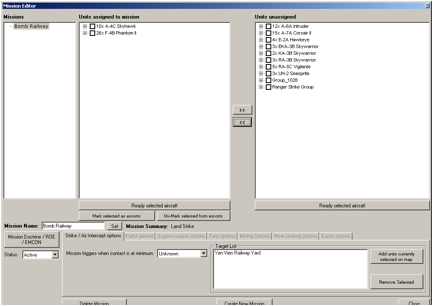 It is significant to note that the CMANO Mission Editor lacks any timing function necessary to coordinate Missions. The Missions simply execute as soon as possible. A player could easily get the strong impression of a game meant primarily for play according to AI-controlled Missions with only minimal interference from the human. Unfortunately, the multiple difficulties encountered by players attempting to exercise hands-on control only serve to reinforce this perception.

Whether a user elects to play the game via micro-management practices or delegate authority to the AI-controlled Missions, the overall objective is to: