The User Interface (UI) is touted as one of main new CMANO features. A number of good points are worth noting, such as:

The player can specify which messages he wishes to see and which to ignore. The ability to close the window with a simple touch of the Esc key is noteworthy, only because this is one of the few CMANO windows with this fundamental capability. 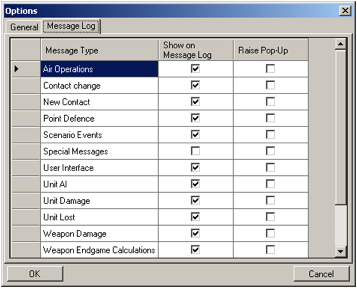 Messages are received in White, Red, Yellow, or Green depending upon the level of severity; administrative tasks generally come in Green, new contact notifications come in Yellow, while hostile enemy action comes in Red. The ability to see these messages as they scroll over the map make it easy for the player to see important messages without losing focus on the action. The colors help identify which messages require immediate attention. 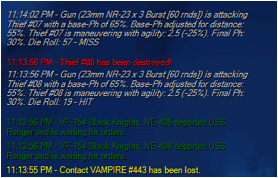 In addition, the pop-up message window option allows the player to re-position the map directly to the location of the subject in the report. Harpoon Classic players will recognize this ability. Unfortunately, no color changes are allowed within the game so any player afflicted with either color blindness or other visual impairment is out of luck.

Many hot keys are similar or identical to other games such as Harpoon3 thereby reducing the learning curve substantially for veteran players.

The Contact Report window is hyper-linked to other windows. This Contact report shows “Detected emissions” from an N-019EB Rubin radar system. Beneath it, all the “Possible matches” to aircraft that carry this system are listed. The player can click on any of the Fulcrum entries and be immediately transferred to the Database function to examine the platform details. Unfortunately, the Contact window appears to be one of the few CMANO windows to support this highly desirable hyper-link feature. 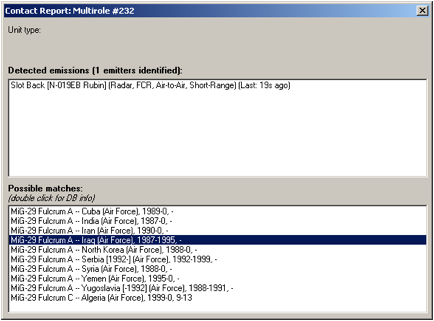 When weapons are unable to fire, the player is shown the rationale behind the restriction. Even obvious database errors such as this are revealed.

Unfortunately, some messages are virtually useless since no further information is available. For example, when the player is notified that: Target is within 5 nm and outside the weapon mount’s engagement arc, there simply is no way to determine the firing (engagement) arc of any weapon.

This is probably the very best CMANO game feature. The Laws of Physics are observed by all platforms. Units cannot instantaneously change altitude, direction, or speed. There are no more “over-the-shoulder” missile engagements against targets in pursuit of the launching unit. This feature generally works in most cases even if there are still instances where torpedoes easily dive hundreds of meters to kill submarines and Tomcat jet fighters can hover motionless like helicopters while never expending a drop of fuel.

The User Interface (UI), at its barest and most primitive level, generally works. Although there are many instances where it is counter-intuitive, rough, awkward, unpolished, and far less than user-friendly, it does get the basic job done. Unfortunately, it is sometimes akin to using a rock as a hammer, since it leaves the player’s hand very sore.

Several significant failings are worth noting.

Players are inundated with information from the single map display. Not all data may be deemed necessary or helpful to the player, but there are few ways to limit this flood. This image depicts numerous super-imposed images and their warnings over North Vietnam. So much data and so many warnings are given that they blur together and prevent usefulness. At present, there is no way to turn off the superfluous data, especially the mouse-over black box. A window menu similar to the Message Options is desperately needed to stem this tide. 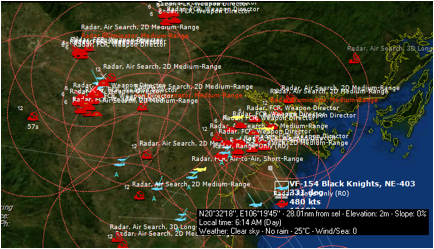 It is difficult to navigate and control units over a larger area. Having only a single map with which to work, players are constantly forced to zoom in-and-out to check relatively minor things or just to clarify the map window. As stated previously, this is cumbersome and awkward, although functional. There simply is no way to zoom-in or – out quickly. Most wargames offer a “jump map” that facilitates movement between distant areas. As it stands, CMANO is best for use within a relatively small area.

Currently, CMANO allows the camera to zoom-in/out via the scroll wheel. This is highly functional and helpful. Another industry standard that is missing is the option to zoom-in/out wherever the mouse is currently situated. Giving players the additional zoom-at-mouse option would be very useful.

A popular mouse option used in the games like, NWAC, Global Conflict Blue2 (GCB2) and Steam and Iron (SaI), is the use of the Scroll Wheel to re-position a map. This feature allows the player to depress the Scroll Wheel to hold a map down so that it can to be shifted. Currently, CMANO centers the map at the current mouse position if the Right+Click button is depressed. It works, but the NWAC capability would allow players smaller corrections, precision, and flexibility.

Weather is simulated and affects sensors. Unfortunately, the weather controls for CMANO are set globally. This means that scenarios which span a large area covering both the tropics and polar regions will share the same weather settings. If a snowstorm is selected for the North Pole, then it will also be snowing at the equator. 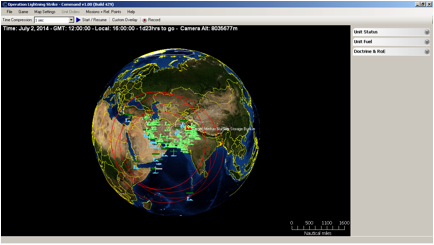 This is likely one of the single-most greatest CMANO failures. The formation editor feature allows units within groups or task forces to arrange themselves relative to one another in order to act as a single cohesive unit so that some units act as a screen for others. This is commonly known as a station-keeping assignment and generally works in this game. Naval games such as Harpoon and Naval War: Arctic Circle have dedicated Formation Editor windows.

However, CMANO uses the single map window to try and accomplish this complicated task and fails miserably. Strictly from a function viewpoint, it “works”, but it does so crudely, increases clutter and confusion, and without flourishes and capabilities exhibited by other games nearly 20 years older. 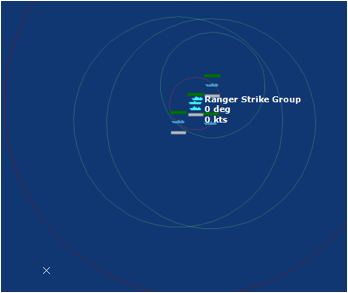 It takes very little imagination to foresee the mayhem and chaos involved after the assignment of CAP, ASW, and AEW patrols. These patrols do not include any other missions that would be needed in a normal scenario. For those who need help, it could look like this: 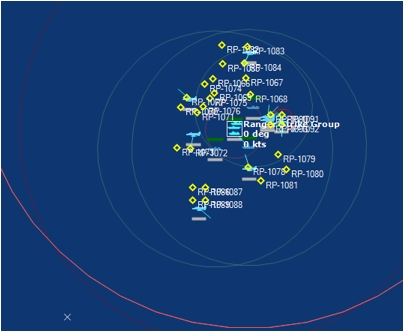 Although the CMANO Formation Editor is theoretically functional, it is hideously inefficient and easily contributes to incredible confusion. Other games like Harpoon handle this function much more elegantly by allowing the player to hide the extraneous ship icons, aircraft, and reference points to avoid clutter.