Although a few hot keys are present and match game functions with H3, far more would be helpful. Most displays such as Weapons, Sensors, and Contacts can only be activated via the mouse-click on a button. Having a hot key both activate and deactivate the same window menu or report (acting as a toggle) would be supremely useful. As stated previously, the current situation using buttons and mouse-clicks is functional, but neither very polished nor user-friendly.

A good case-in-point would be the Map Options pull-down menu. Just to turn off the current settings displayed would require 20+ individual clicks back and repeatedly activating the Map Settings pull-down menu since there are no hot key functions whatsoever in the menu. A Map Settings menu set up like the Message Options window would also be ideal to allow players to set all the map options in a single instance and not 20+ individual actions. 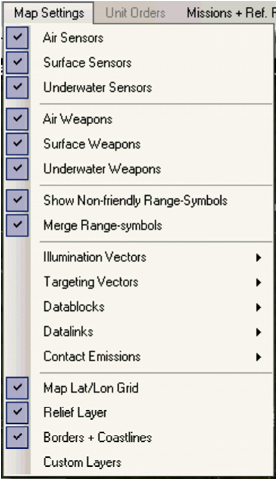 Basic and vital information is often difficulty to locate or missing entirely. Several instances of this occur, including:

The Air Operations window is severely deficient in information and not very intuitive. This is where players select amongst various loadouts to arm and launch their air assets. No range information is available whatsoever for any of the possible loadouts. Players have no idea which loadouts have sufficient range to reach the targets. The hyper-link capability found in the aforementioned Contact Report window is desperately needed here. Currently, players are forced to drop out of the Loadouts menu, move to the database viewer, find the relevant data, and then return. An additional column showing the range for each loadout is urgently needed. As stated earlier, this window is functional, but neither efficient nor polished. 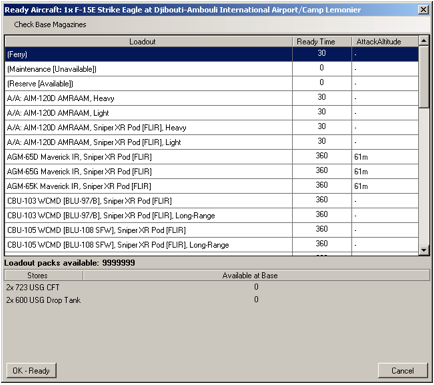 The Air Ops window is not intuitive, as it does not readily show the player which loadouts are available. The only way to know if a loadout can be selected is to actually click on each and every loadout entry to see if any “Loadout Packs Available” message appears at the bottom of the loadout screen. When aircraft have 30+ possible loadouts and only #3, 8, 23, 27, and 29 are available to the player, it is a nightmare trying to remember which loadouts are possible and then decide which ones to select. The can be confusing.

An additional column showing the “Loadout Packs Available” for each loadout is sorely needed. Hyperlink capability could also exponentially increase the efficiency of this window. As stated previously, this window is functional, but not very efficient, user-friendly, or polished. 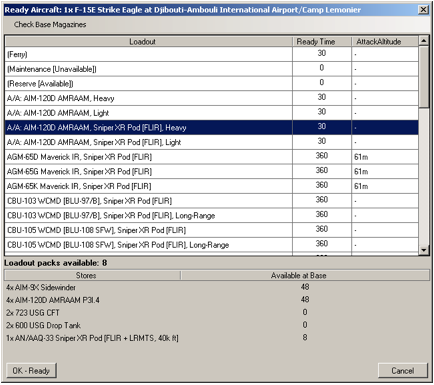 Weapons data can be seen on a number reports. The details such as range, damage potential, and launch parameters are nicely included. However, any sign of actual performance is missing. Such information is necessary for players to make informed decisions to questions such as:

How much better or more accurate is a Maverick missile when compared to a laser-guided bomb (LGB) or iron bomb?

This button calls up the weapons currently loaded on a platform. Players can also re-load with different weaponry at this point. The example shows the torpedo tubes aboard a submarine. The window is basically functional, but is non-intuitive because it is missing important data. For example, not every player can know exactly what every weapon is or does. What is the difference between a Starfish and the Type 53-65A torpedo? A hyper-link would be immensely helpful for veterans and novitiates, alike. 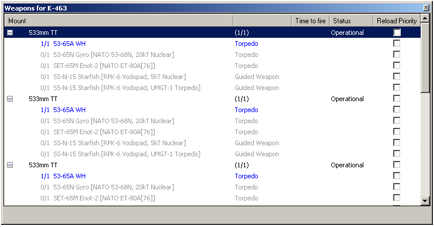 Also, there is no indication as to the availability of weapons. If a player wishes to re-load the Type 53-65A with a Starfish, are there any Starfish aboard? The window lacks this vital datum. The player can activate the magazine report window, check on weapons availability, then return to this window, but that simply demands additional steps to locate basic information. As previously stated, this window is functional, but not very polished. 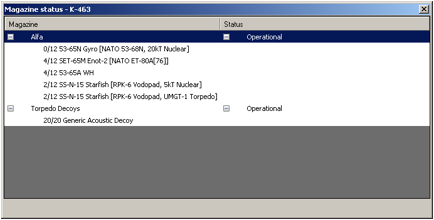 CMANO uses a Windows format in design. However, it often fails to make use of many common Windows features. Window size and position can be changed, but these changes are rarely persistent. A player could take the effort to re-size a window, move it, find his information, then leave it to check something else only to come back and need to make the previous changes, again.

Also, the only way to close nearly every window is via the Close Box in the upper right-hand corner. Many other windows-based applications allow the user to close windows with the:

Ideally, all four capabilities would make a UI truly user-friendly. As previously stated, the current windows arrangement is fully functional. However, it may not be very user-friendly or very polished since a player is constantly hunting for the Close Box to leave windows.

It is difficult for a player to order a specific speed or altitude for units under his direct control since the window operates with sliders and a few basic throttle settings. Units with slower speeds are easier to direct, but it is nearly impossible to assign a specific value for speed or altitude to aircraft in order to coordinate their movements at a uniform speed. As stated earlier, this window is perfectly functional, but not very user-friendly or polished. 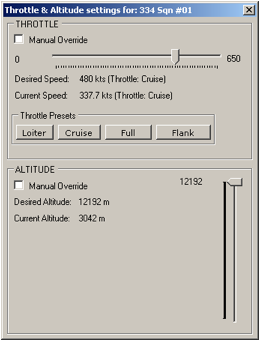