A new DCS module is on the horizon for those that like to fly rotary aircraft: The Mi-8MTV2 Magnificent Eight.

Before we talk about all the juicy bits, a few notes about the preview build this article is based upon. This preview article is based on a pre-release beta version that is believed to be a fair representative of what may eventually become the retail product. With the understanding that some features may be added, removed, or modified prior to the release, we give you this preview article which is simply a non-critical look at features that may be included in the retail release. As usual, all material is subject to change and all errors in content and facts are the author’s and the author’s alone. 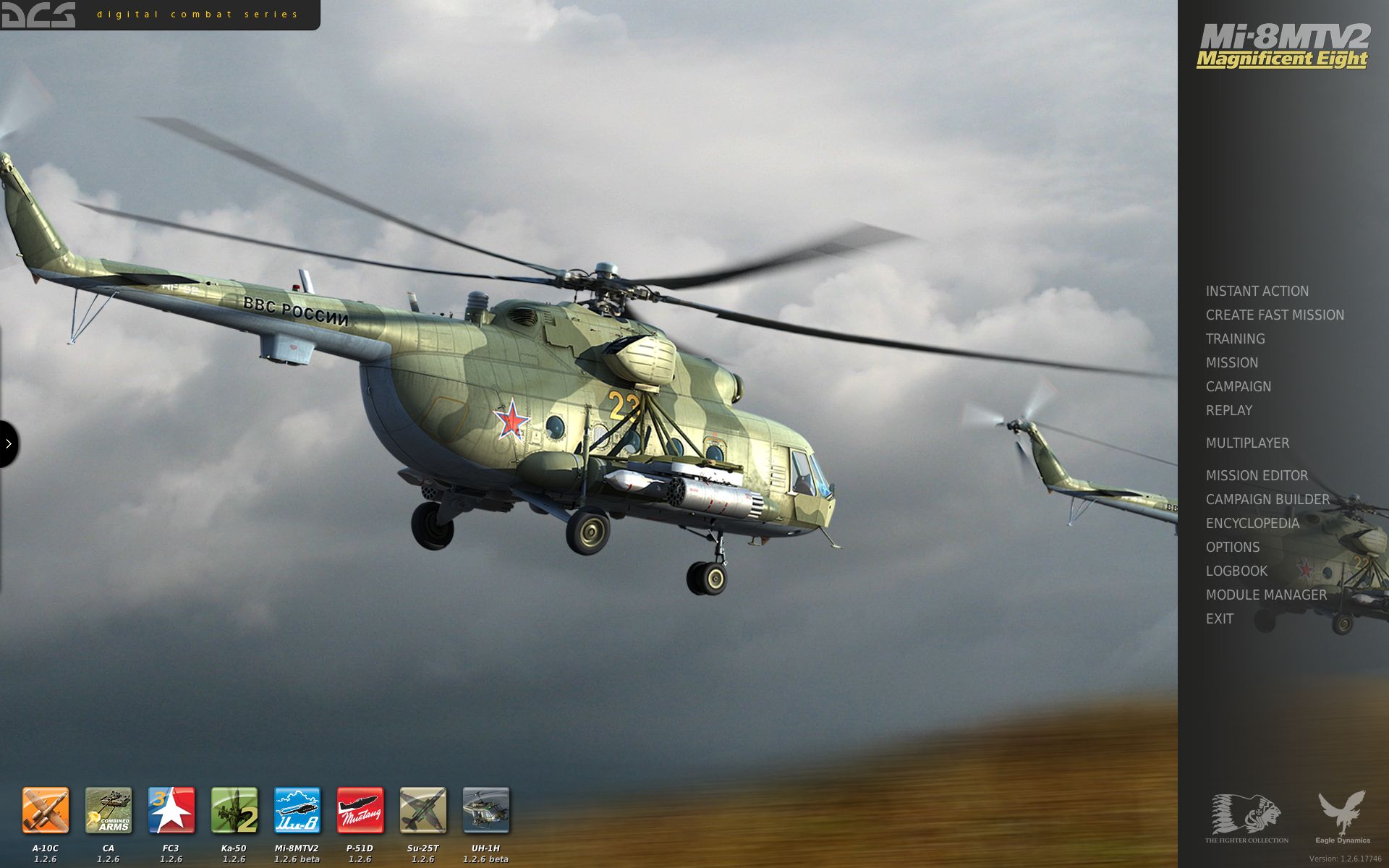 DCS World is a free-to-play flight simulation environment that ships with a free module, the Su-25T Frogfoot. You can download DCS World and pick up any additional modules you’d like here. Remember that while you can download any of the other modules for free, a paid-for activation code (aka license, aka serial number) is required for each module in order to actually play it. Only install modules for which you’ve already purchased an activation code.

Just months after the pre-release of the already widely acclaimed DCS: UH-1H Huey, ED and Belsimtek have given us yet another option in the high-fidelity helicopter market with their latest product, DCS Mi-8MTV2 Magnificent Eight. Just like the DCS: UH-1H product, DCS: Mi-8MTV2 is delivered as a pre-release beta with updates and upgrades to come. While the final version is sure to differ, we can get some idea of what’s to come from this fully playable version.

The Mikhail Mil Mi-8 helicopter (NATO reporting name “Hip”) is a twin-turbine helicopter that can serve as a transport or gunship. Designed by the Mil Moscow Helicopter Plant (Московский вертолётный завод им. М.Л. Миля) the helicopter began production in 1961 and is still produced today. Although Russia is the largest producer and operator of the platform, more than 50 different countries use some variant of the Mi-8, making it one of the most produced helicopters in the world.

The pre-release beta of DCS: Mi-8MTV2 gives us the Mi-8MTV2 version of the Hip in all her (his?) glory. One of the telltale signs of an Mi-8MTV2 is the tail rotor sitting on the port side, instead of the starboard side, like other Mi-8 versions. Additionally, the dust protection system sitting like trumpet mutes in the front of each engine is another characteristic of this variant.

The external model in DCS: Mi-8MTV2 includes these unique features plus many other gorgeous details. 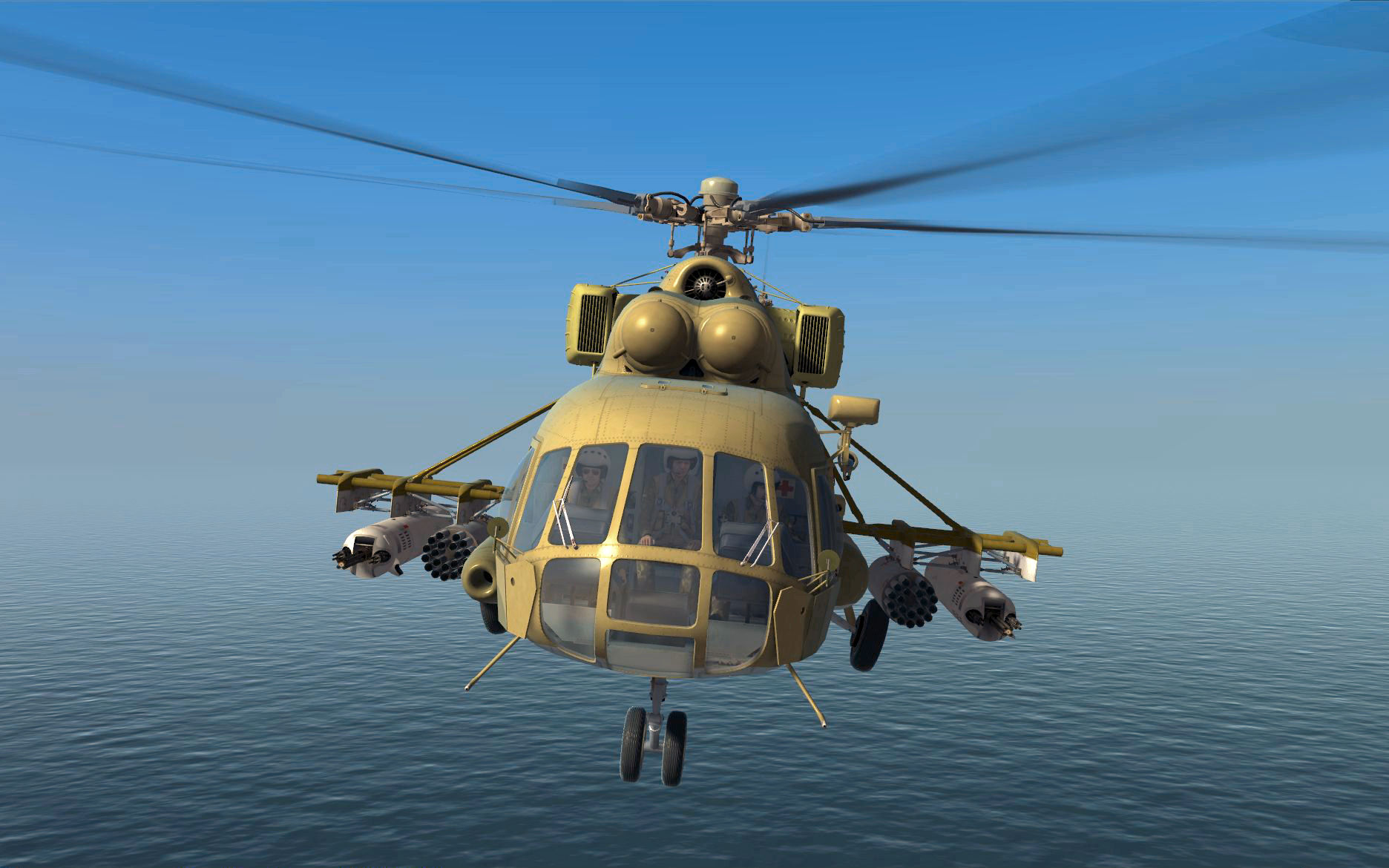 The Mi-8 is bold and beautiful. 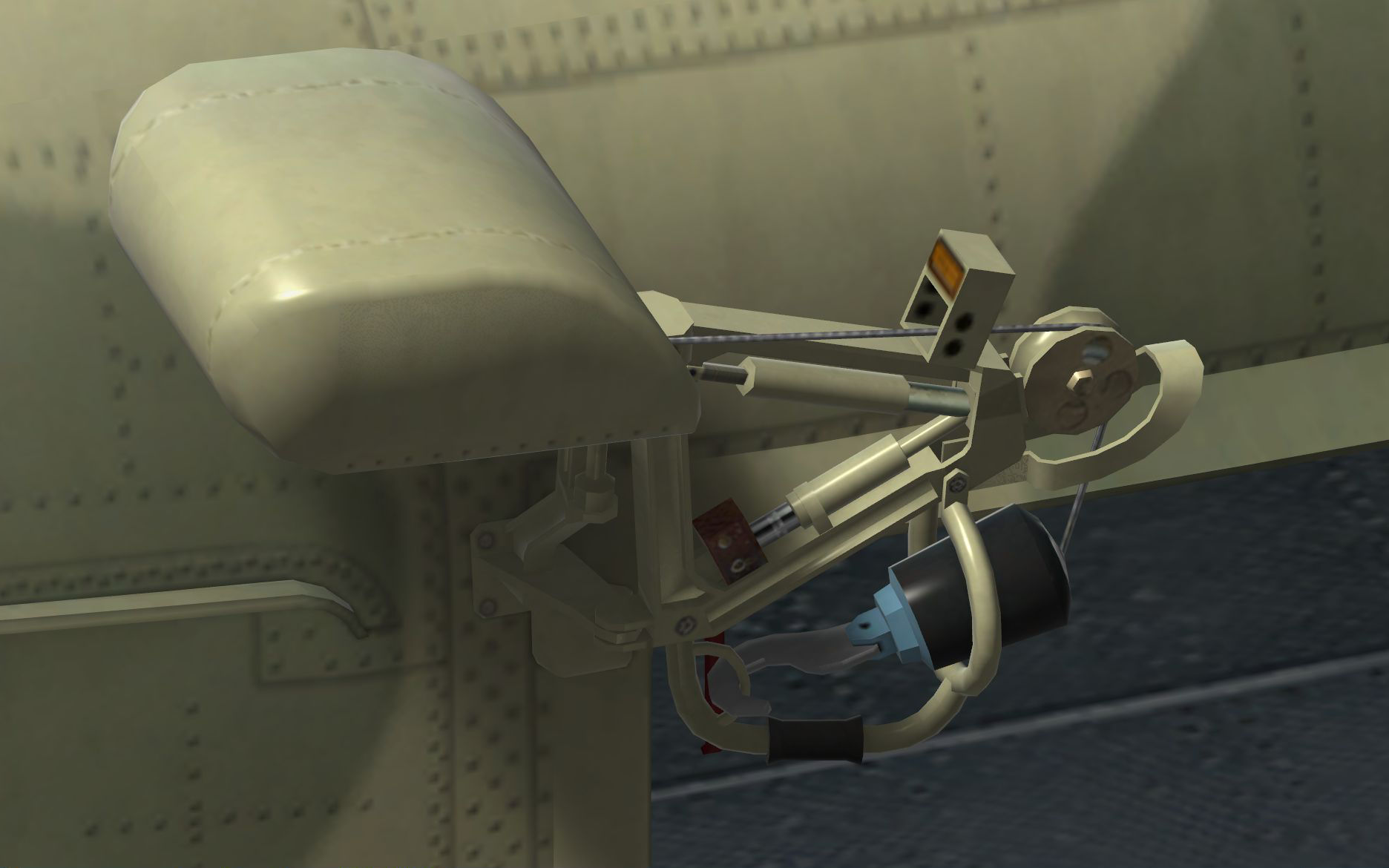 This is a great platform to play “Name That Thingy”. 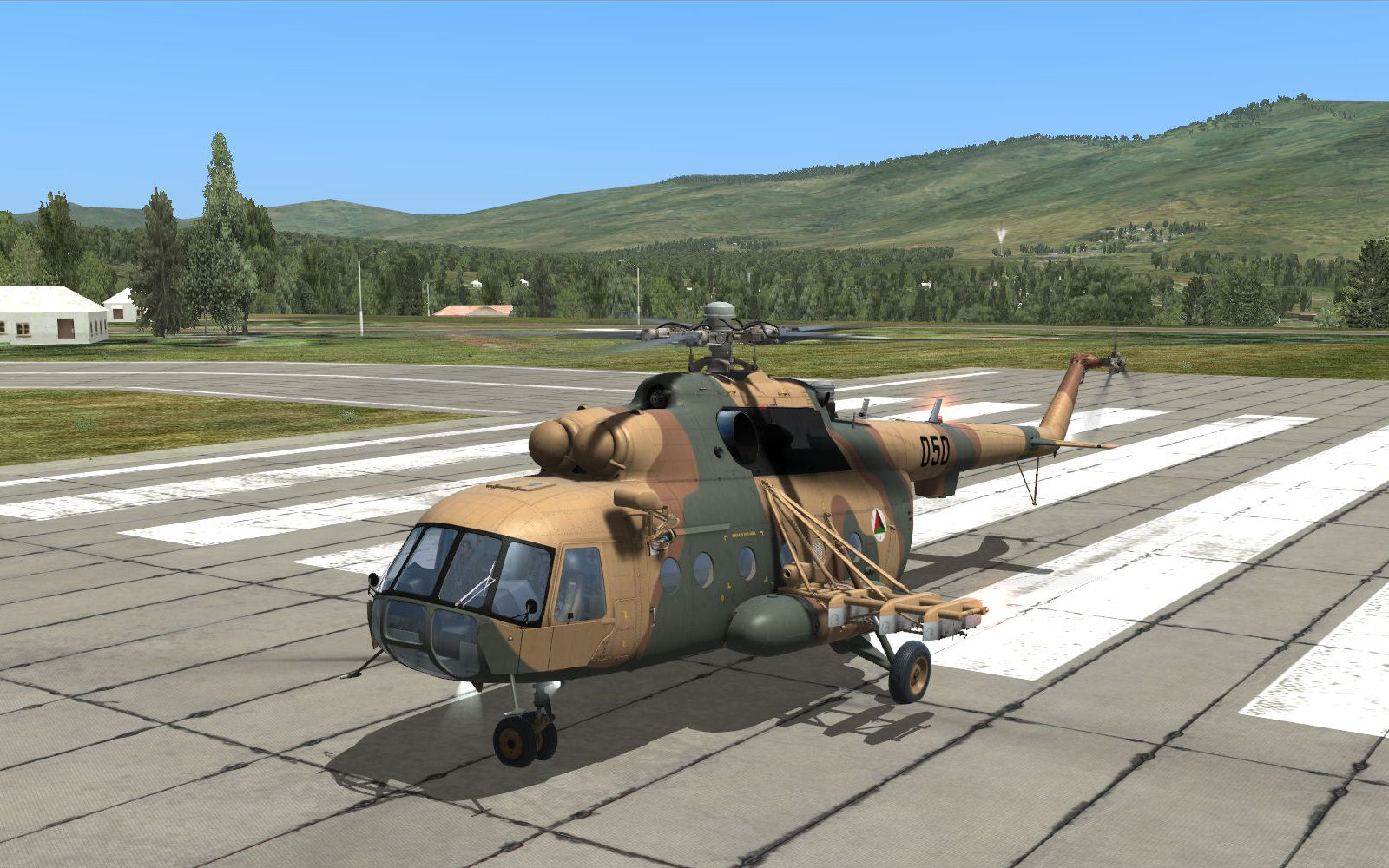 Even the doors are animated: the pilot and copilot windows, port side access door, and the rear clamshell doors all open and close. 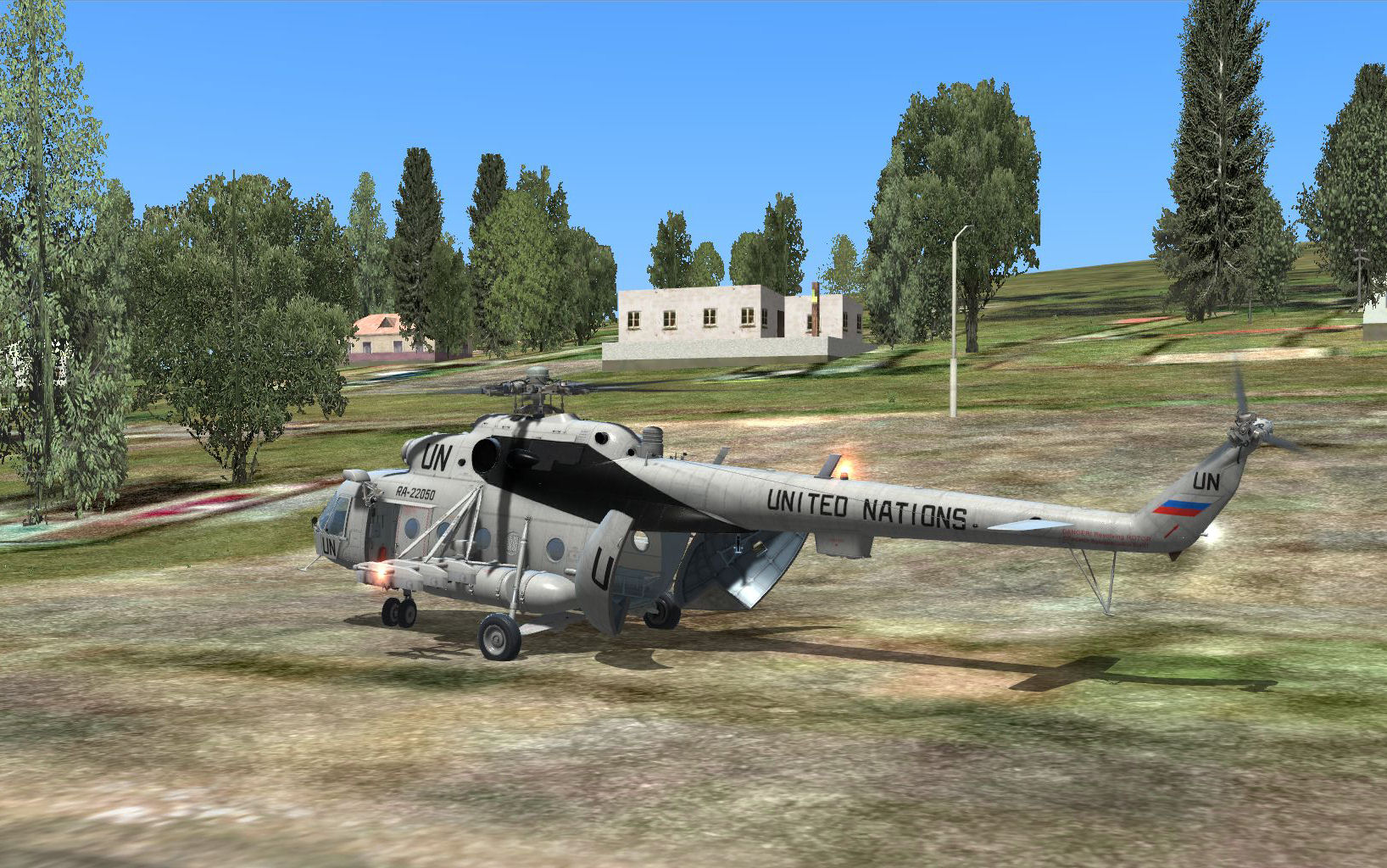 Not every country has a livery yet, but the paint jobs that come with the pre-release beta are quite detailed.  Included in this release are liveries for Abkhazia, Georgia, Russia, South Ossetia, the Ukraine, and the USA have liveries, as well as those pesky insurgents. 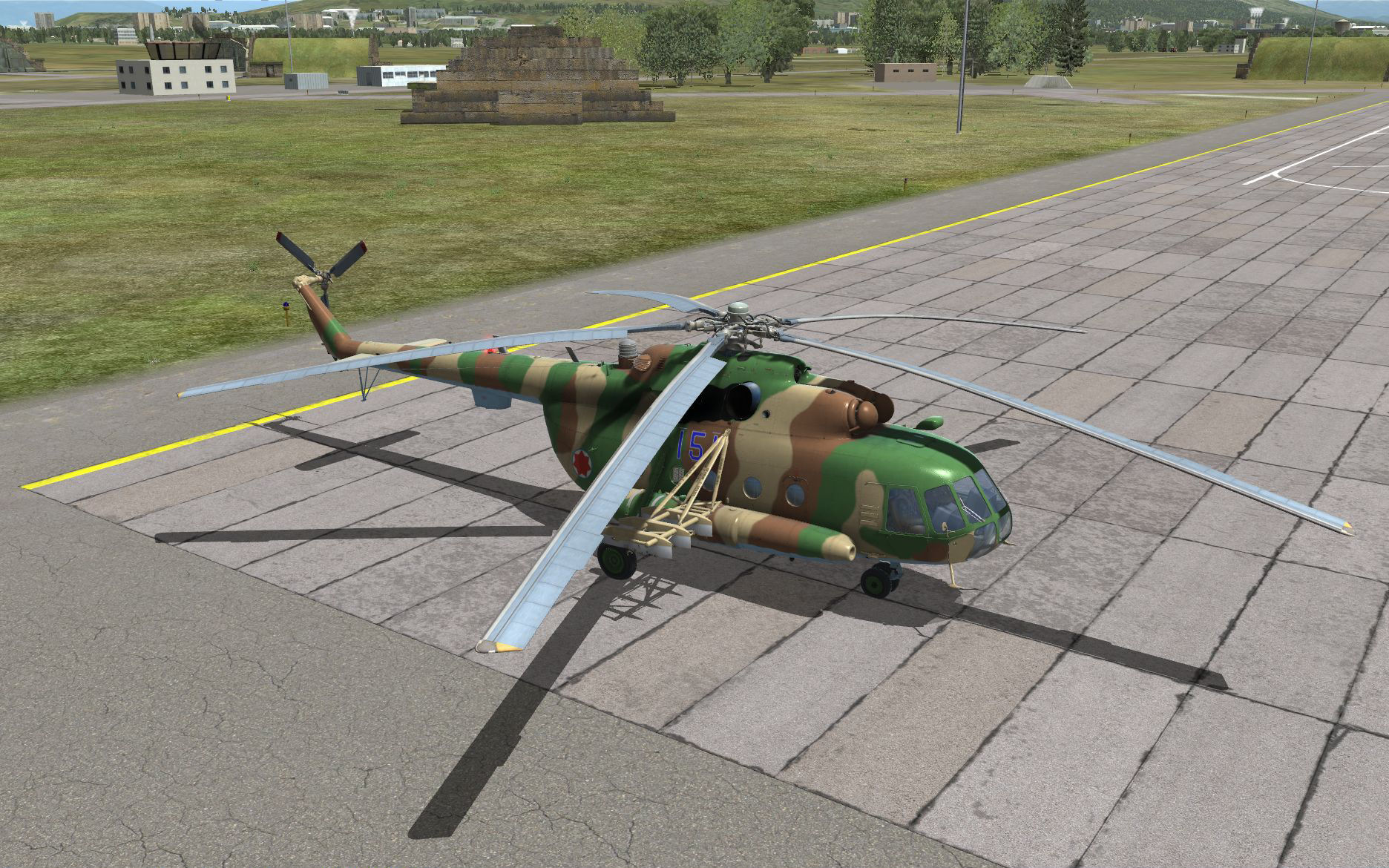 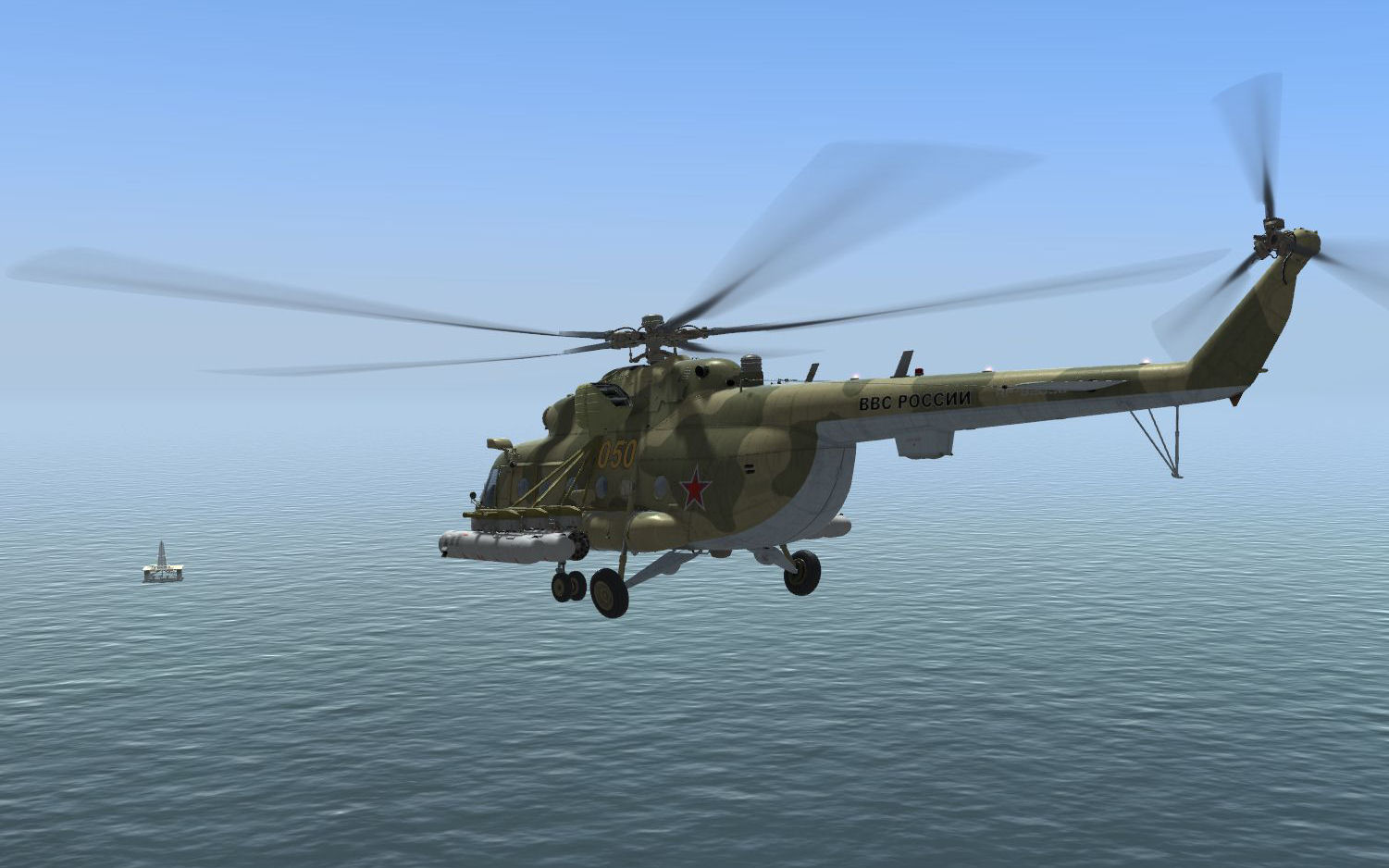 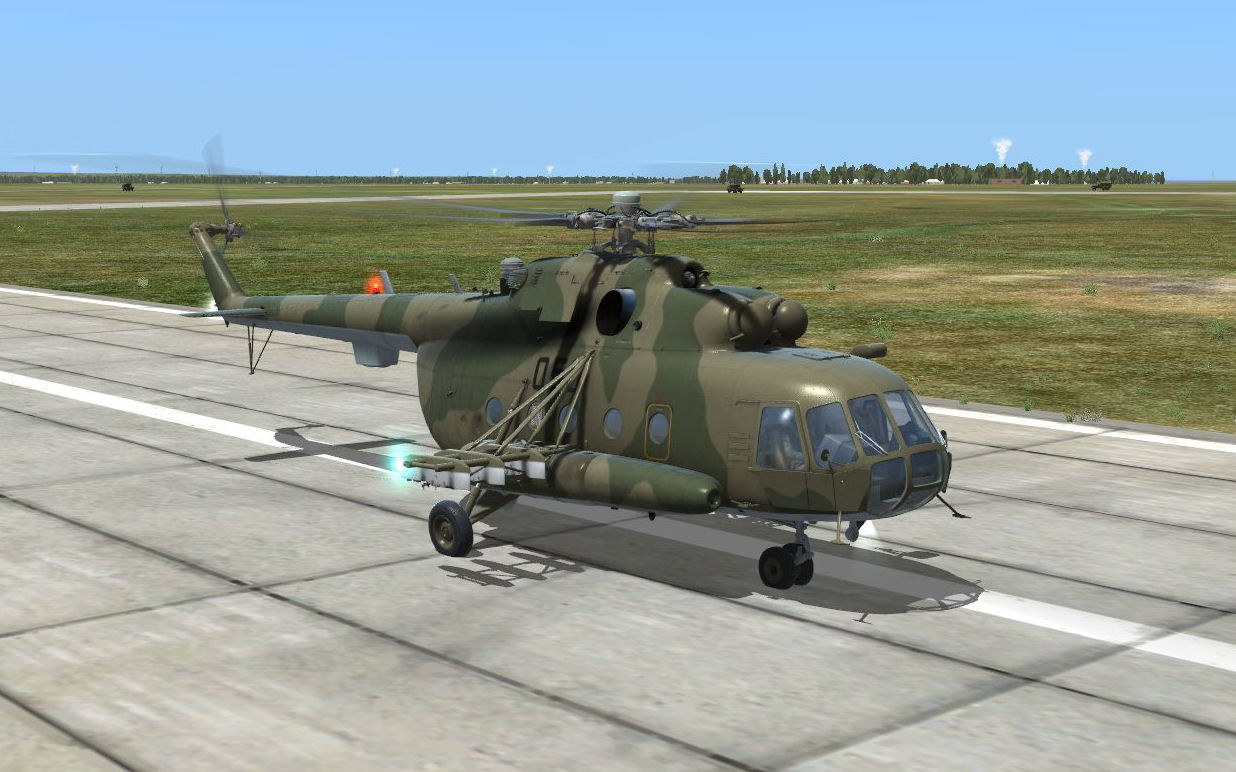 It wouldn’t be a DCS product without an incredibly detailed interior as well, and DCS: Mi-8MTV2 doesn’t disappoint. While the Huey boasts a relatively simple cockpit, the Mi-8 has vast plains of switches, dials, buttons, knobs, gauges, and lights. If you’re not overwhelmed, you’re not paying attention. 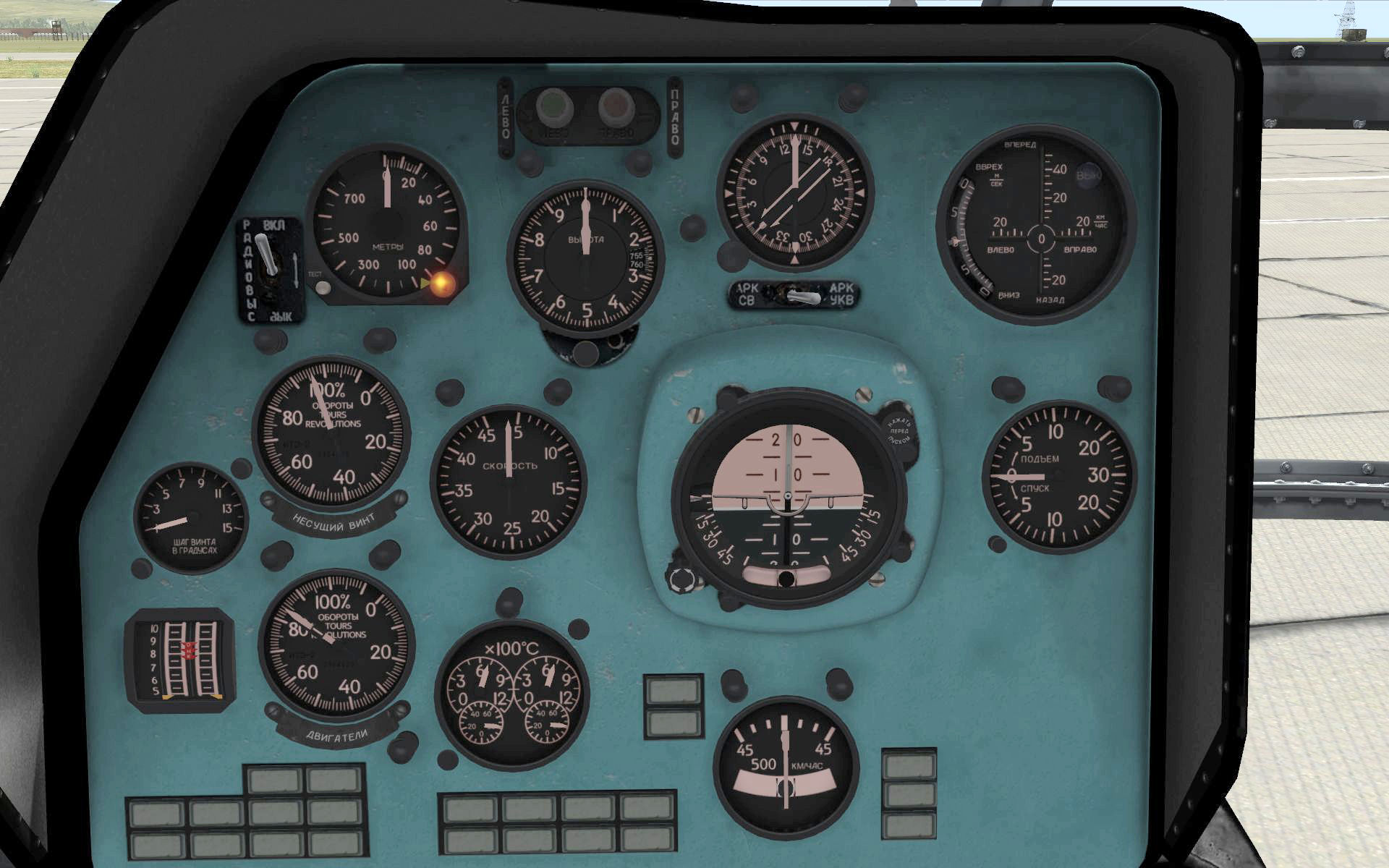 I love that Russian blue. 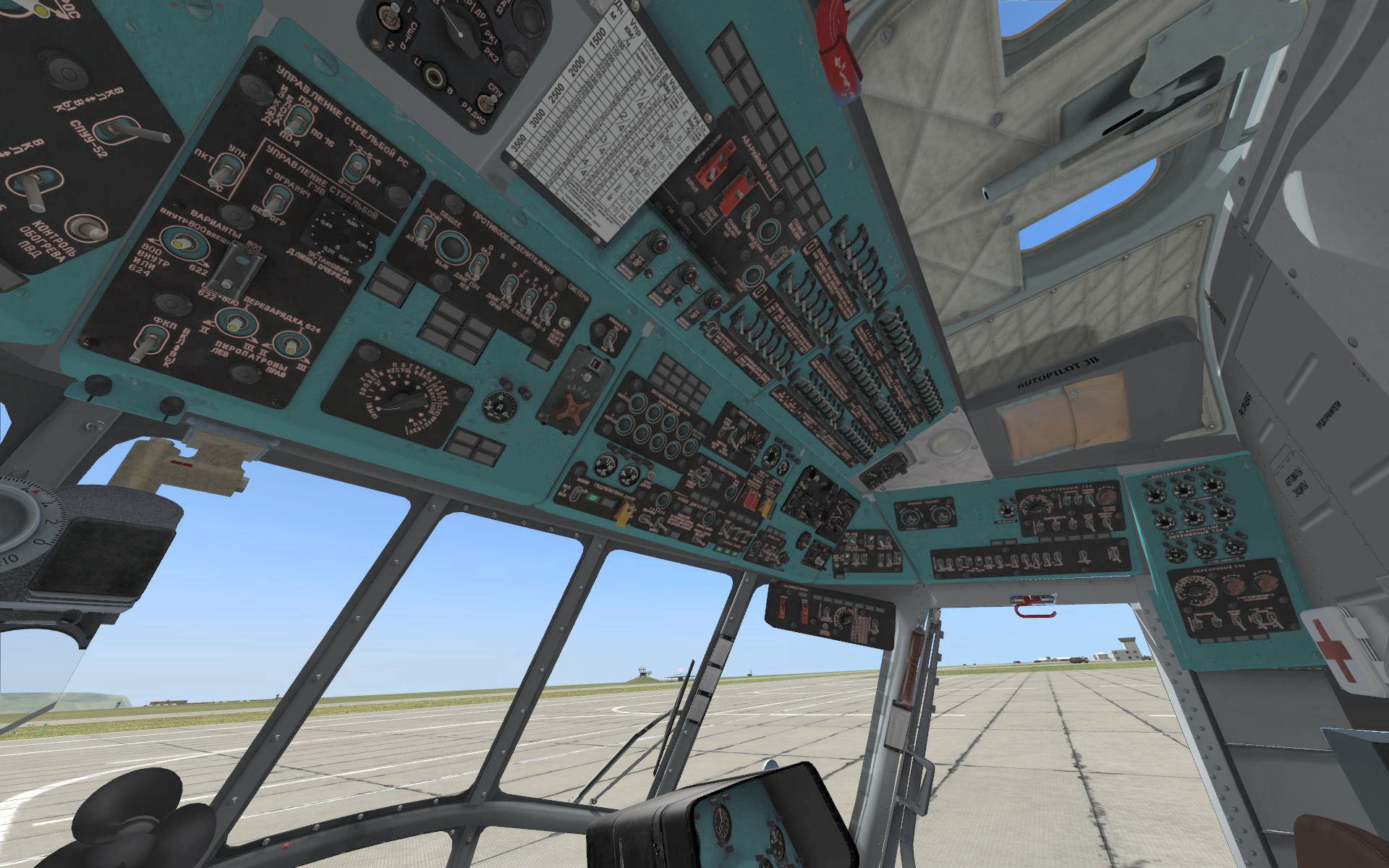 Hundreds of switches and buttons and, yep, they’re all in cyrllic. 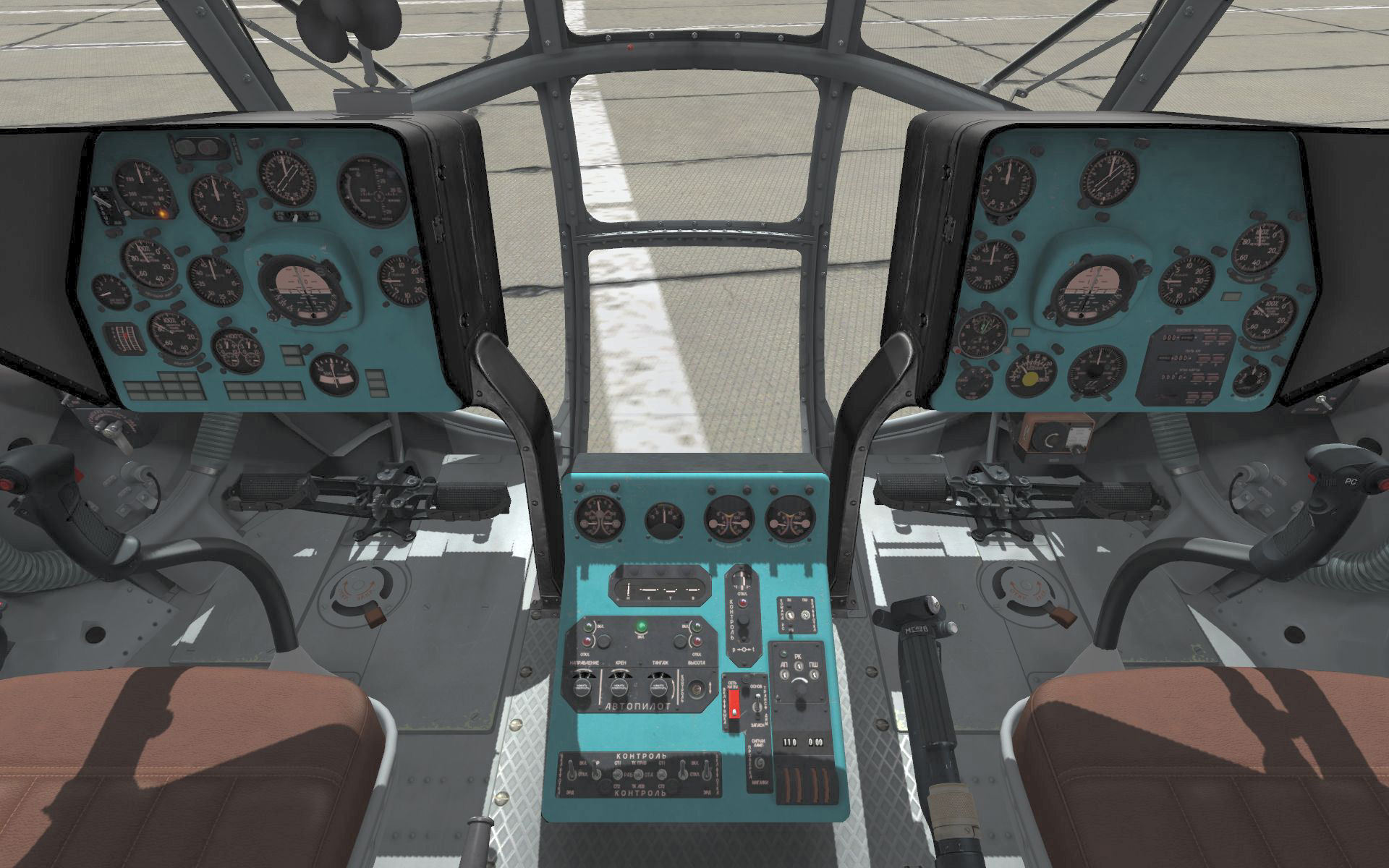 The view from the back office. 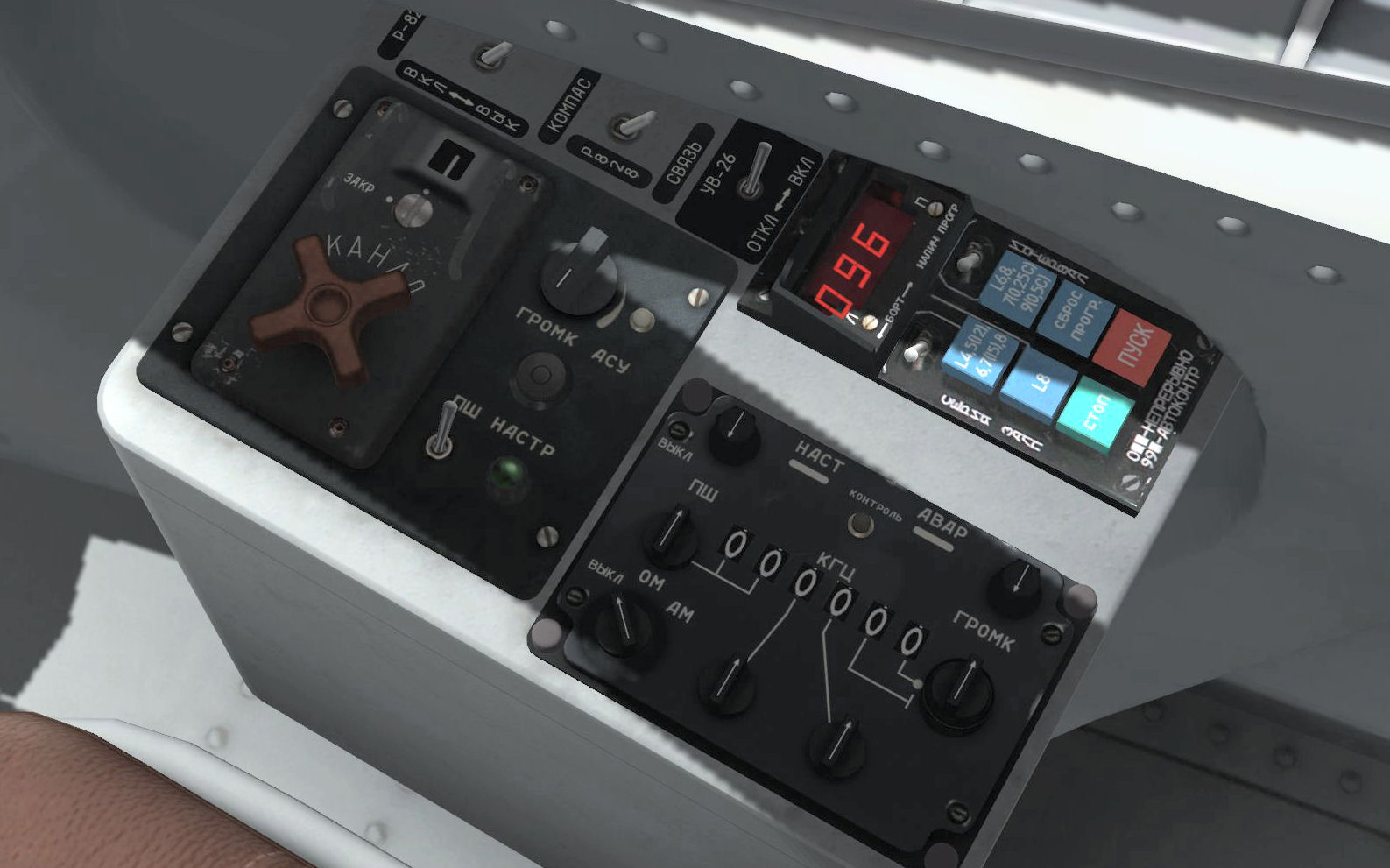 Once they ran out of space on the dash, they starting stuffing gear next to the copilot seat.

The large majority of cockpit items are already clickable, including all the buttons and switches you need to perform a cold start, shutdown, and to employ the various weapon systems. Self-shadowing is also present, when enabled, which you can see in some of the shots above. The cockpit also supports 6DOF head motion.

While the Mi-8 lacks characteristic chop-chop of the Huey rotors, the sim captures the sounds of a large twin-turbine helicopter quite nicely. Buttons and switches click appropriately and there’s even a somewhat annoying “buzz buzz” alarm noise that’s modeled when some system is trying to get your attention. The team even took a field trip to record actual Mi-8 audio to make the sound experience that much more authentic.

Multiple player positions in a single aircraft is a feature that the ED has hinted at since the Huey but has yet to be released. The Mi-8’s three-seat cockpit (pilot, co-pilot, and flight engineer) has great potential for this feature. I, for one, am very much looking forward to this game-changer.

The Mi-8 is a big and lumbering beast compared to the much more nimble Ka-50 and somewhat more nimble Huey, but the powerful turbine engines and the massive five-bladed rotor disk give the Mi-8 a lot of lift vector to play with. In the hands of a capable pilot, the Mi-8 is quite maneuverable and a lot of fun to throw around the battlefield. 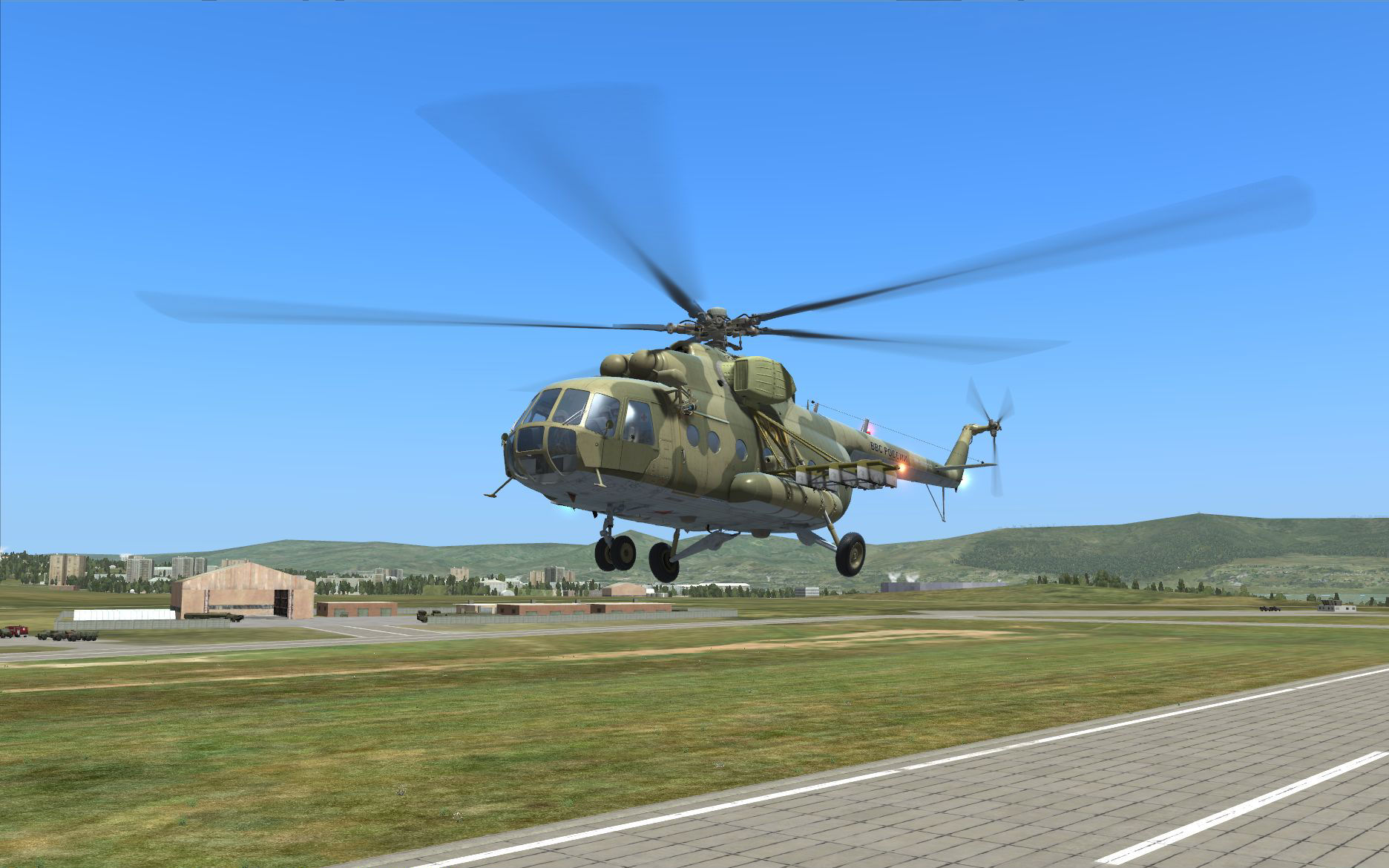 Look at the size of that rotor disc!

As with any conventional helicopter, mastering the hover and precise control is quite difficult – understanding basic helicopter dynamics and control is key – but the castoring nose wheel and sturdy non-retractable main gear let pilots make an easy ground taxi to the runway. Landing  is another thing altogether and learning to shoot smooth and efficient approaches is satisfyingly challenging. The inertia of the massive helo and the dreaded vortex ring state have put me into more than a few craters while learning this craft. 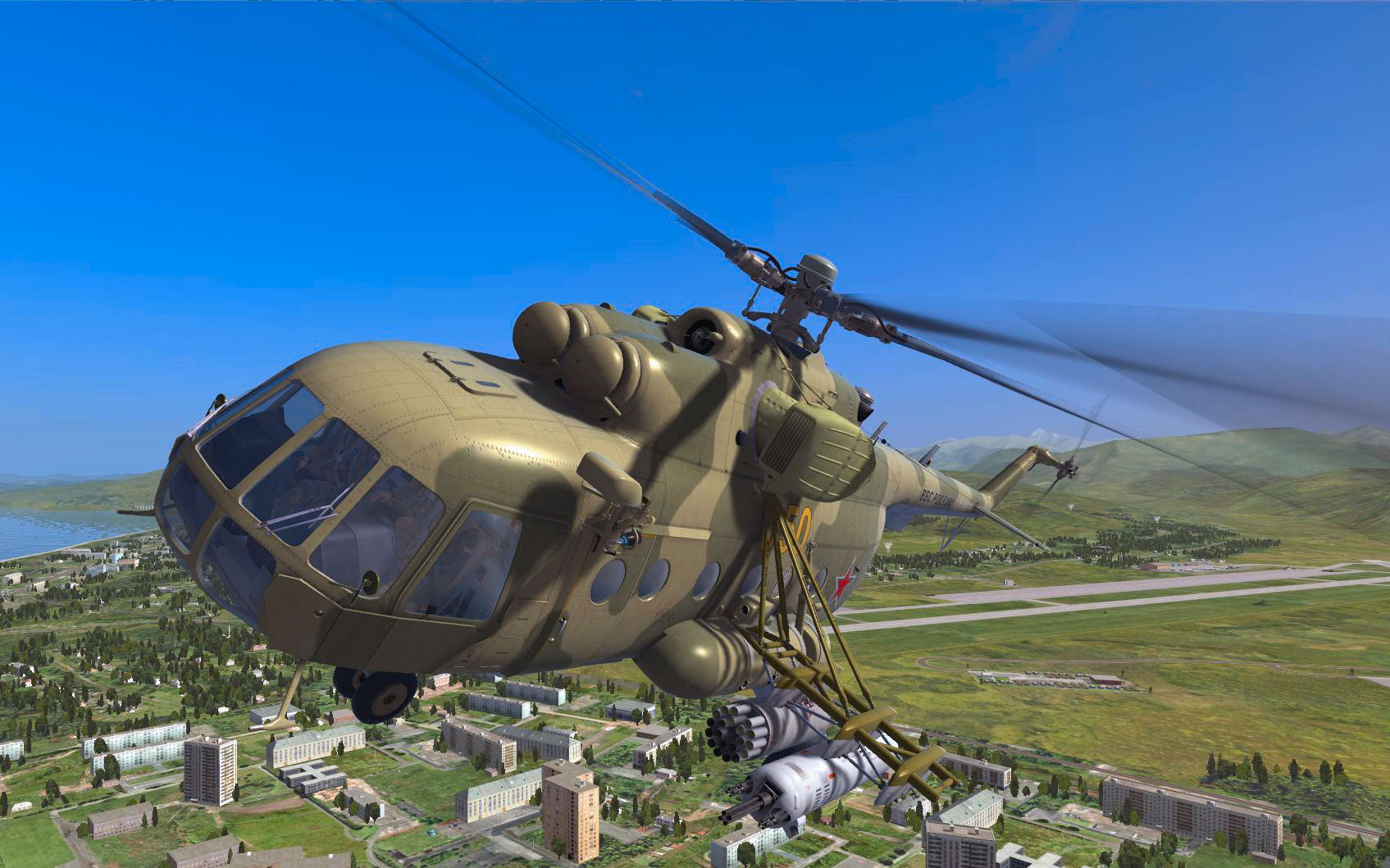 To help with all that dynamic-ness going on, the Mi-8 does have an autopilot, the AP-34B Automatic Flight Control System (AFCS), which provides stabilization in the three axes (roll, pitch, yaw) as well as a four-channel autopilot controller (heading, pitch, bank, and altitude). The stability augmentation takes a little instability out of the inherently unstable platform while the autopilot modes greatly reduce the pilot’s workload when flying the aircraft from point A to B.

Although there isn’t a full DCS flight manual in English with this pre-release beta, the packge did include a real Mi-17 (which is the export version of Mi-8M) flight manual that is 211 pages of gloriously detailed information, including tables of fuel consumption per kilometer per hour, altitude-speed envelopes, and a 27-page preflight checklist! As with previous DCS products, this documentation can be found in your installation. Look in… \Eagle Dynamics\DCS World\Mods\aircrafts\Mi-8MTV2\Doc.