The hum and buzz of avionics in the cockpit even before engine start is mesmerizing and electric to the soul. Switches pop, buttons click, and levers shnick in and out of position. There’s a shooshing sound as the cockpit is pressurized and I could almost feel the increase in pressure on my eardrums. The pyro charges that loads/unjams the gun sends a bang through the cockpit. The airframe groans and moans as you bend it around some knots and air screeching past the cockpit changes tone and amplitude with airspeed and angle of attack. Cannon fire and weapon launches come muffled through the cockpit glass and sounds from the Tumansky engine are modeled too, although there’s an eerie silence when the afterburner kicks in. Whether this represents true physics of the engine or a pre-release omission I don’t know, but, overall, the sound set is very satisfying and quite immersive. 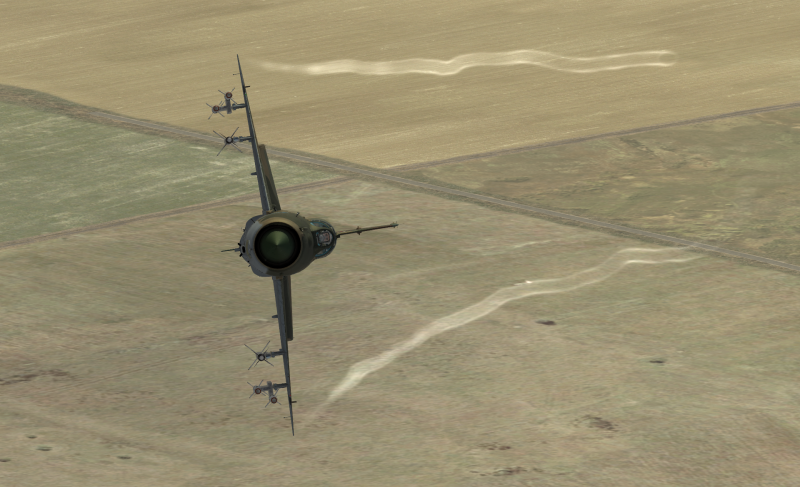 It’s difficult to do a critical assessment of something as complex as a flight model for a supersonic aircraft using a pre-release build. For example, some of the unique characteristics of the delta wing aerodynamics have yet to be fully captured in this pre-release version, but Leatherneck has acknowledged the issue and indicates that they’ve already corrected it for the release version. A full and critical assessment will need to wait until the final product has been released. In the meantime, I can say that the DCS: MiG-21bis flight model is satisfying. The brisk acceleration, snappy rolls, and impressive climb rates are all as expected from the platform and it’s great fun to fly around. 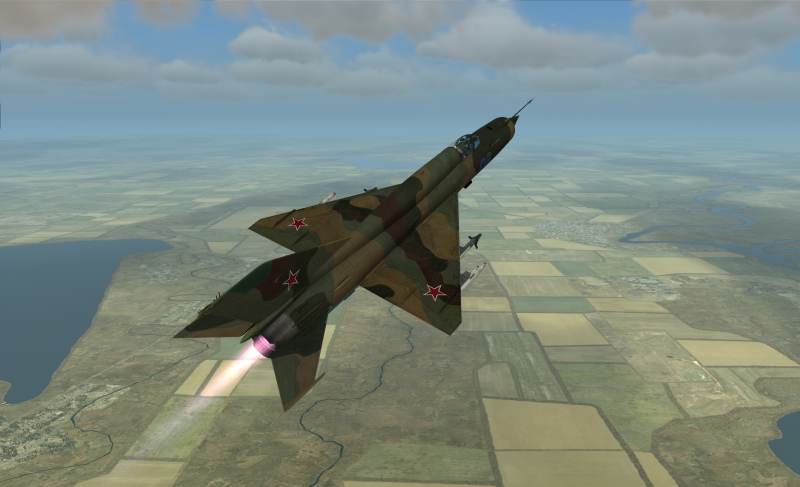 The step in acceleration from MIL to afterburner is a kick in the pants. The aircraft literally rockets forward and is an exhilarating experience for a simulation. It’s hard to not yell “whoo hoo!” each and every time that burner kicks in. 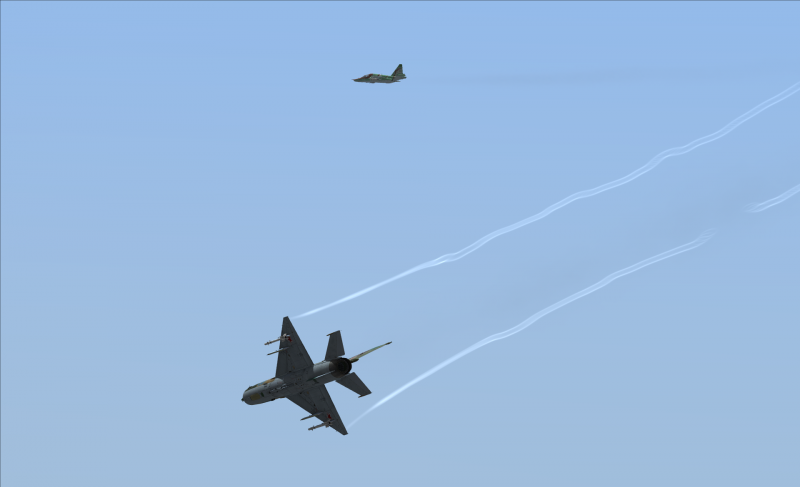 The bis maneuvers pretty well in dogfights – perhaps too well (see above). The delta wing planform doesn’t typically like the low speed or high angle of attack regimes of flight.

Hydraulically boosted ailerons placed at the farthest tips of the wing give the MiG-21bis plenty of roll control authority – you can spin the Fishbed like a top! The entire stabilizer moves as a single elevator (called a stabilator or flying tail) and gives good pitch control authority, both at low speeds and at transonic and supersonic speeds. A sizeable rudder rounds out the control axes, giving the MiG-21bis decent control authority over most flight regimes. 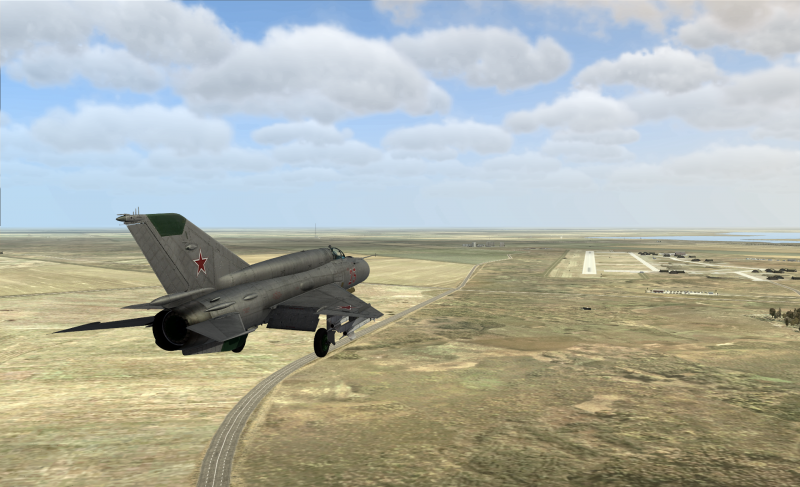 Like most other hi-fi flight models, landing the MiG-21bis smoothly will be one of the most challenging and most rewarding things you can accomplish.

This high-speed aircraft dreams of being a rocket and it’s not all that keen about coming back down. With a minimum approach speed of 340 km/hr (about 180kts), landing the MiG-21 can be even more exciting than going supersonic, especially if you’re the type who keeps landing long. Mind your approach speed and angle and remember that the landing gear are built for rougher landings than its Western counterparts.

Ground handling of the MiG-21bis can be a little awkward, especially with a free-castoring nose gear. Differential braking is achieved through the rudder pedals, but not through individual toe brakes. The wheel brake system is actuated by a single lever on the control stick and braking force is distributed to the main wheels according to how much rudder is applied: squeeze the brake while holding the left rudder and the wheel brakes are biased left, resulting in a left turn. While not as challenging to taxi as the P‑51D, the MiG-21bis will require some finesse and thinking ahead of the aircraft to stay between the lines.

The MiG-21bis bounces around a good deal during the takeoff and landing roll-outs, quite a bit more than I expect, but I chalk it up to pre-release jitters. 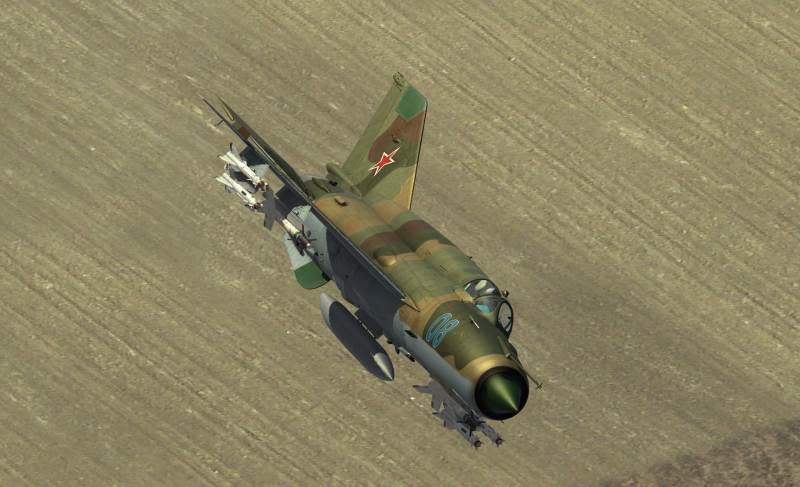 This little balalaika can sing and sting. In addition to being able to carry a decent selection of air-to-air missiles (R-13, R-3 – radar and IR variants, R-55, R-60, and the RS-2US), the MiG-21bis can also carry rockets, bombs, and gun pods to support ground attack missions. Adventurous pilots can employ rockets and gun pods on aircraft targets as well – I fully expect to see screenshots and/or read an AAR on this within the first week it’s released. 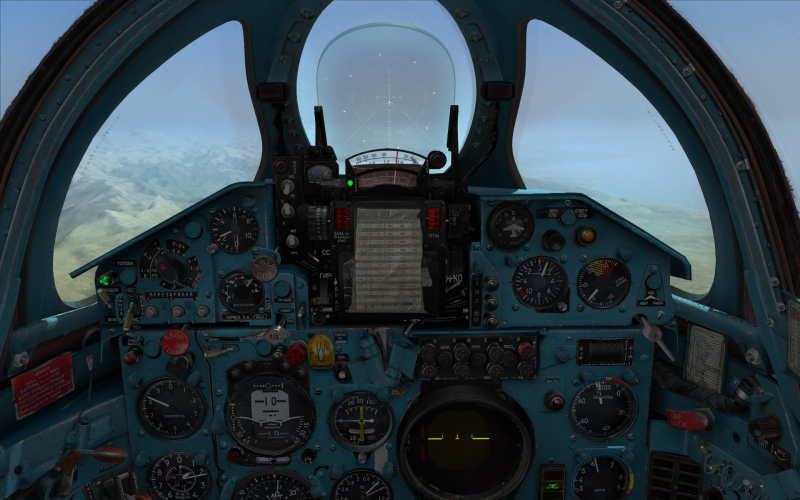 The HUD is quite austere compared to modern displays: there’s no airspeed or altitude readouts, no heading navigation tapes or navigation bugs, just a single gyro-compensated (or missile seeker driven) reticle reminiscent of WWII days.

The aiming reticle on the minimalist HUD can be adjusted to show a gyro-compensated firing solution for the cannon, the aiming position of an IR missile seeker, or the computed impact point for the various ground attack weapons, but that’s the only symbology you’ll see on this glass. There’s no HOTAS-integrated stores management system, either. Selection of weapons requires setting dials and flipping switches, processes easy to mess up in the heat of battle. Take the training, read the manual, and, above all else, practice. 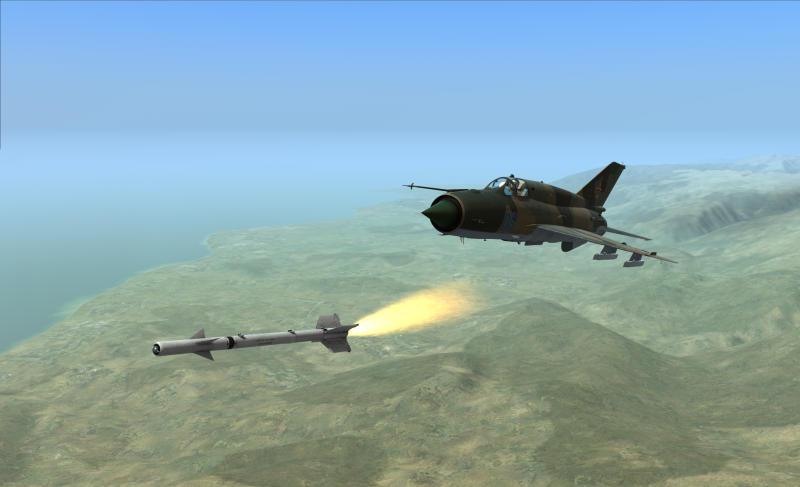 IR missiles for close in and… 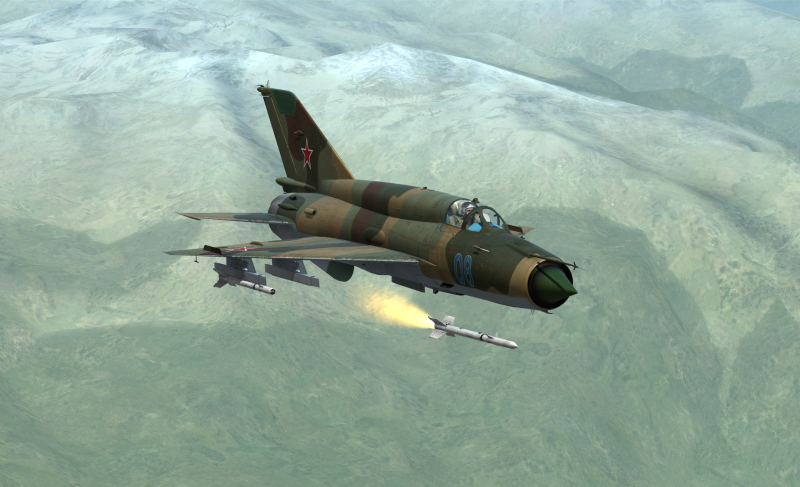 …semi-active radar missiles for when you’re just a little further out.

Using the radar to find, track, and lock up enemies will be a different experience than found in most other combat flight sim platforms. To start off, the Sapfir radar requires a 3-5 minute warm-up period, which is modeled. Forget to at least set your radar to standby during your ramp start procedure and you could be in trouble once you actually need the radar. Additionally, the Sapfir is cooled by alcohol (probably not of the vodka variety) of which only a limited supply is carried by the aircraft. Run the radar for too long (20-25 minutes) and you’ll burn up the radar after you consume all the coolant (this is also modeled). Expert pilots will find tactics to judiciously use this precious resource.

Once the radar is up and scanning, finding enemy aircraft on the B-scope style display (top-down view with range and azimuth) through the ground clutter, cloud reflections, mountain echos, and limited detection range add to the challenge. The radar cursor can only be slewed up and down in range, not azimuth, so you have to point your aircraft at your target’s bearing before you can lock it up. Once locked, the display switches to a C-scope view (bullseye view with azimuth and elevation) with lines showing the relative range and launch zone capability of the selected weapon.  The Sapfir’s radar lock can be a fickle thing, breaking off target for no obvious reason, further encouraging pilots to delay locking the target until very close-in .

Although designed and used successfully as an interceptor, the short acquisition range of the radar and short engagement range of the even the longest legged missiles available to the MiG-21bis mean that engagements are pretty close ranged, especially compared to modern aircraft. Getting close to your target for a close-in surprise attack is the recipe for success. It’s easy to see why successful usage of this aircraft required intercept assistance from an external controller. In DCS World, pairing up with a wingman and a ground commander/AWACS/GCI will greatly improve your effectiveness in this aircraft.