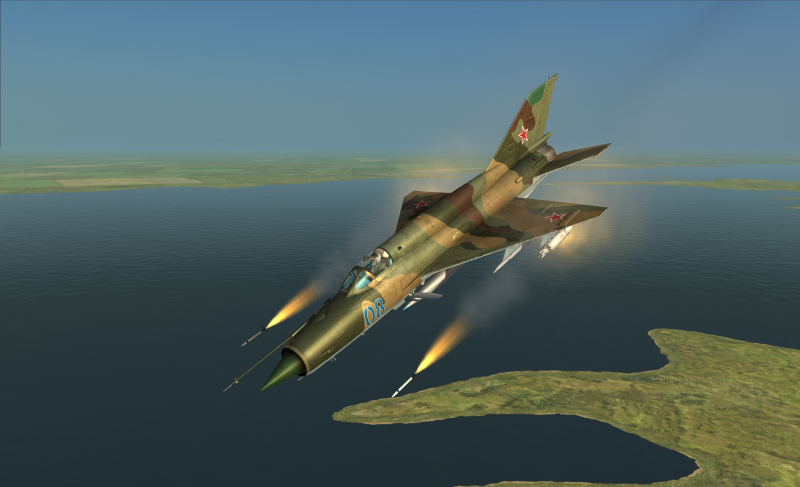 Surprising as it is to some, the speed and stability of the MiG-21bis makes it a lethal ground attack platform – hit and runs at Mach snot feel good.

For unguided rockets, DCS: MiG-21bis pilots have a choice of 16 or 32 S-5Ms or single S-24s. At 24 cm in diameter and carrying a 123 kg blast-fragmentation warhead, you shouldn’t need much more than one S-24 for most targets! The UPK-23 gun pod is also a fun choice for parties, sure to liven up even the most boring gathering. When loaded with the gun pod, an additional avionics box is also installed in the cockpit, giving the pilot the necessary controls to activate the pod. DCS: MiG-21bis also includes the Kh-66 Grom, a beam-riding missile that packs a punch in a semi-precise package. 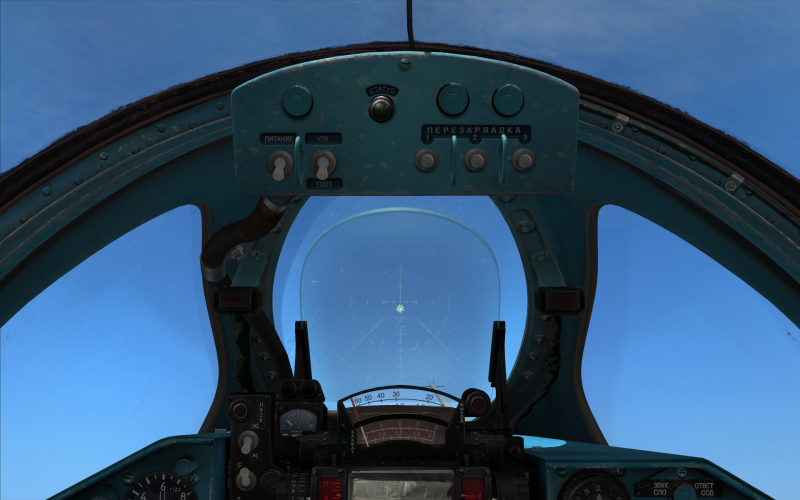 The installation of some weapons and systems requires specific controls to be added to the MiG-21bis cockpit, a process that is seamless and transparent to the user in DCS: MiG-21bis. 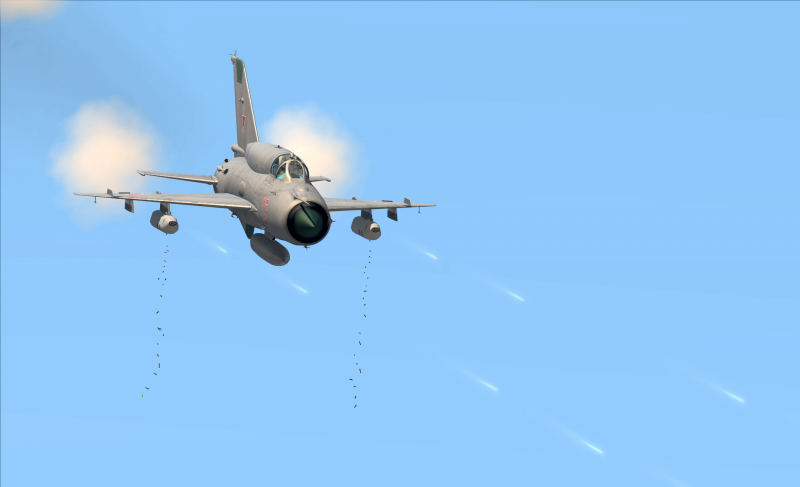 Gun pods are just as brutal on the Fishbed as they are on the Frog or the Hip.

A nice selection of bombs are available, too, from dumb FAB bombs, to the rocket-boosted runway busting BetAB-ShP. There are several cluster munitions on the list, including the British BL755 submunition and the more Russian RBK-250 with PTABs. The weapons inventory also has two tactical nuclear weapons, the R-24 and the R-28, although the manual points out these don’t simulate real nuclear blasts, just overpowered explosions. No mushroom clouds or radiation effects will be seen here, but either weapon devastates a pretty large area of the battlefield, not to mention your frame rates. 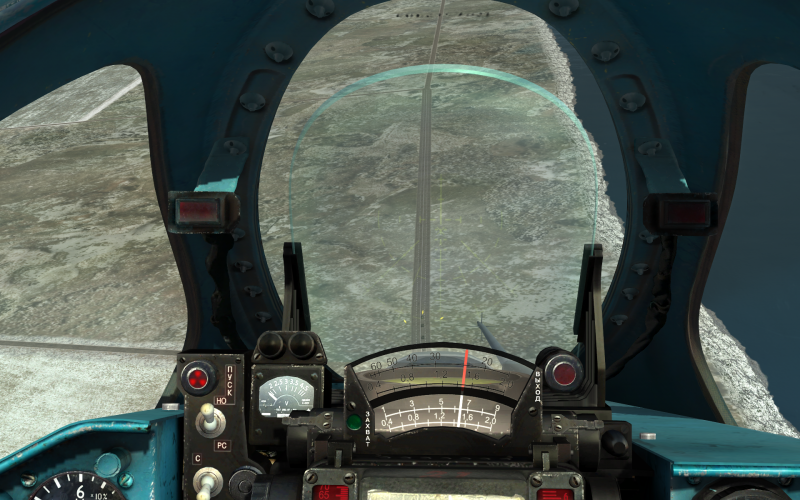 While it’s never been touted as the most capable ground-attack platform, the MiG-21bis has an avionics ground attack mode that enables the pilot to put ordnance on target with pretty decent precision – with more reliability and ease than iron sights and Kentucky windage. There’s no Shkval here, or targeting pods with laser rangefinders, but the Sapfir radar is used to generate a continuously computed impact point which is then shown on the HUD. While the MiG-21bis lacks the precision targeting and computed release systems of modern strike aircraft, this feature is a welcome addition to the sleek interceptor and functions quite effectively – IF you remember to flip all the right switches, that is! 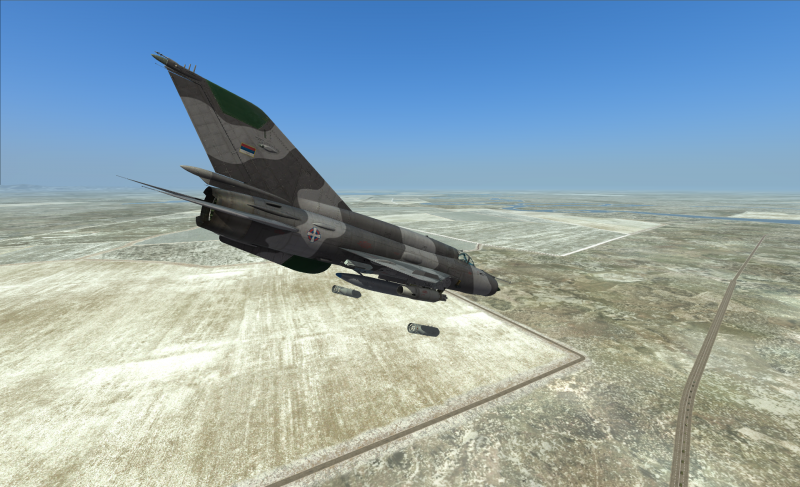 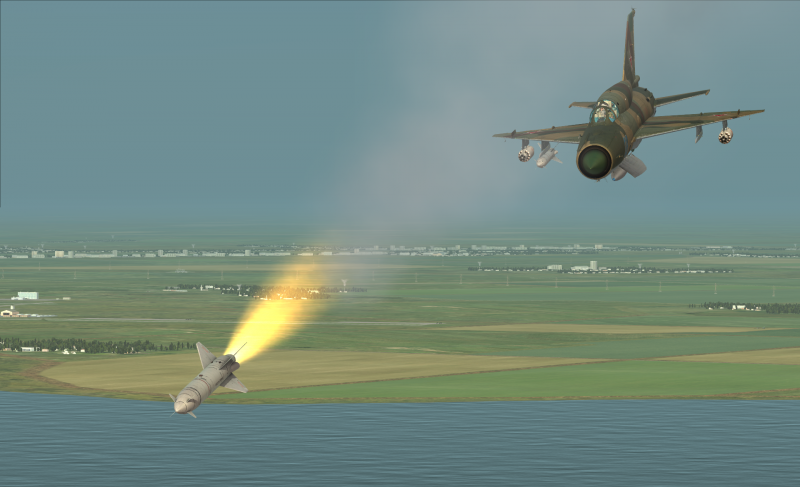 One hot Grom, coming right up!

Although the MiG-21bis lacks the fancy schmancy Shkval of some of its successors, the Kh-66 Grom beam-riding weapon gets the job done in a somewhat similar fashion. Line up the reticle, lock the radar to the ground, and let loose the big ol’ dog of war! I’m not aware of a way to precisely slew the reticle onto your target, or how to finely adjust the targeted position once the weapon is in flight, but the heavy warhead of the Grom makes it a little forgiving to some miss distance, especially to soft targets. Fun times to be had by all. 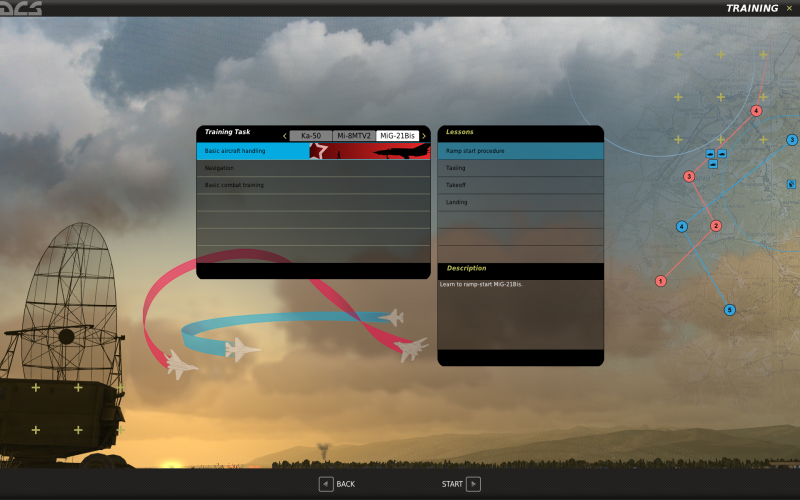 DCS: MiG-21bis comes with a good introductory set of training missions: fully interactive and detailed to build core competencies in basic MiG-21bis operation. The ramp-start training is essential, in this author’s opinion, although repetition is really required to bring it home. Similarly, you can read all day long about how to land the MiG-21bis but having the virtual instructor whisper the steps in your ear (actually more like sending you text messages) while you try it for the first time is golden. The other training courses (navigation, basic weapons) are equally instructive and will open your eyes to the world of opportunities that the MiG-21bis can offer the versatile pilot (and mission designer!).

The missions are generally robust if you stay on cue but, as with all scripted missions, things can get wonky if you don’t follow along. I was able to keep pace through most of the missions, although I ended up with targets behind me in the Air-to-Air training when I took too long to engage the first targets. Remember that if the training mission is waiting for you to press a keyboard key (like “A” for the autopilot), be sure to press and hold it for a second or so to activate the trigger. This bit me more than once. 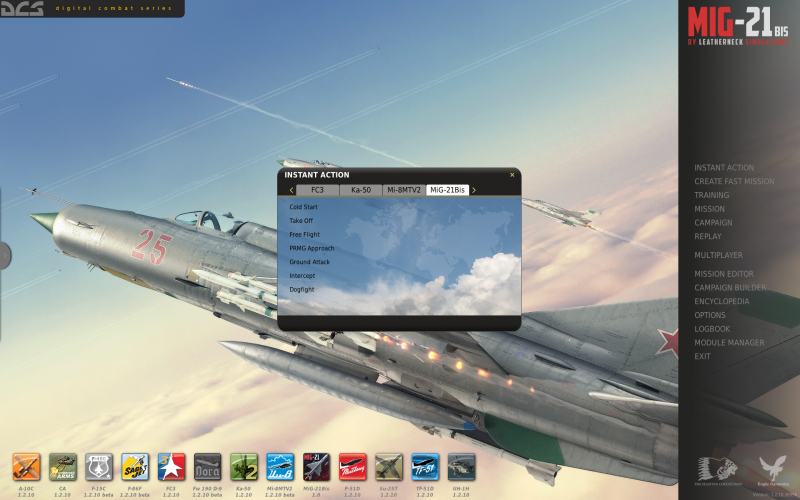 I’ve always been impressed with the Instant Action option in DCS World and I’m pleased to see DCS: MiG-21bis taking advantage of this under-appreciated feature. A single click of the button (ok, two clicks, but only one after you bring up the Instant Action menu) puts you directly into the action. For DCS: MiG-21bis, the available options are Cold Start, Take Off, Free Flight, PRMG Approach, Ground Attack, Intercept, and Dogfight. 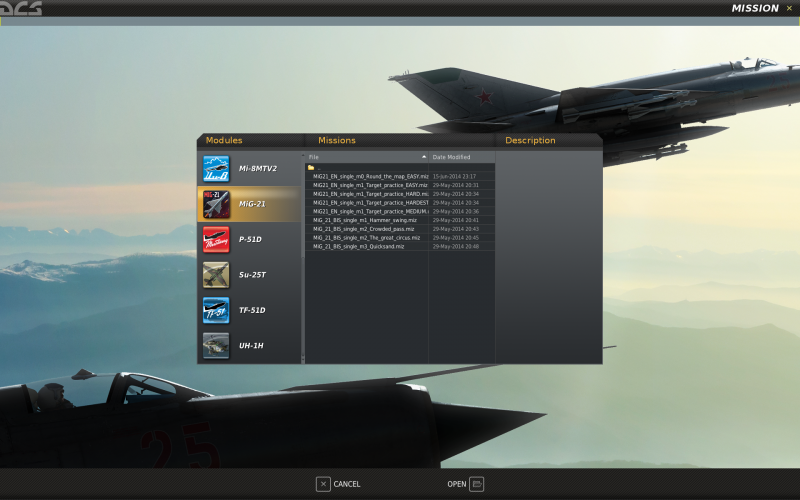 A selection of single missions are included with the pre-release package. I was pleased to see a mission that focuses on free-flight – three hours of it! – requiring the pilot to make two landings at two different airports for refueling. These sorts of missions are greatly appreciated by those of us who love to FLY simulated aircraft in addition to doing the yank and bank in them.

There is also a series of target practice missions which effectively function as training missions, giving you an opportunity to test your mastery of the MiG-21bis in air-to-air against increasingly difficult threats. The remaining missions put the MiG-21bis in more varied scenarios: escorting attack choppers, performing combat air patrol, or executing a ground attack. As with all pre-release products, the mission content may change once the product is released, so check the forums for the latest updates.

As you can see from the last couple of screenshots, the background images in the DCS: MiG-21bis GUI theme are all eye catchers, each one worthy of being a desktop background. The attention to detail and quality throughout the module is impressive. 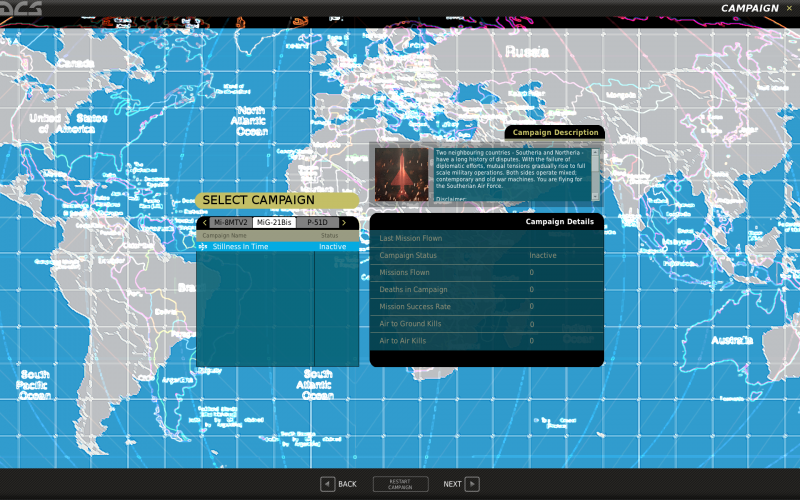 The included campaign puts you, a rookie pilot, at the beginning of a war between Northeria and Southeria, two fictional countries dreamed up for DCS: MiG-21bis. The first mission, “Joy Ride” has you flying for Southeria where you must ramp start (yay!) your MiG and perform a familiarization tour of the area. A simple flight, really, but the approach of easing into the action is trend I’d personally like to see much more of in future campaigns. There are 19 other missions in the structured campaign, which I’m looking forward to diving into. 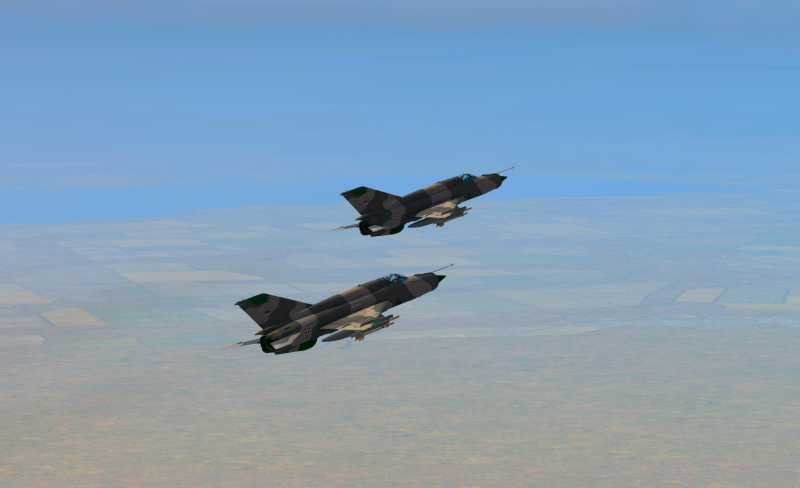 DCS: MiG-21bis will be released soon. How soon, only the developer can say, but I expect we’ll hear very soon. In the meantime, check our forums for the latest news and updates on this newest and most welcome addition to the DCS World family.

From what I can tell from the pre-released version I was given, DCS: MiG-21bis is going to be an amazing product. The attention to detail and quality of work that is demonstrated throughout this simulation is an indication that the Leatherneck Simulation team takes great pride in their product. Not only does it look gorgeous and feel realistic, the thing is just fun to fly! I can say that I have literally spent hours just flying around, not firing a shot, with a wide smile on my face the whole time, and I’m looking forward to doing much more of it. If you were on the fence about the product before, I am here to tell you that not only has Belsimtek and now Leatherneck Simulators put to fishbed (hyuk, hyuk) any doubts about whether a third party developer can bring DCS-level modules to the World, they have each firmly cemented the level of expectation from future developers at an intimidating level. While I’m grateful to have such high-quality simulations available to our community, I certainly don’t envy future developers who will be judged by these incredibly high standards. 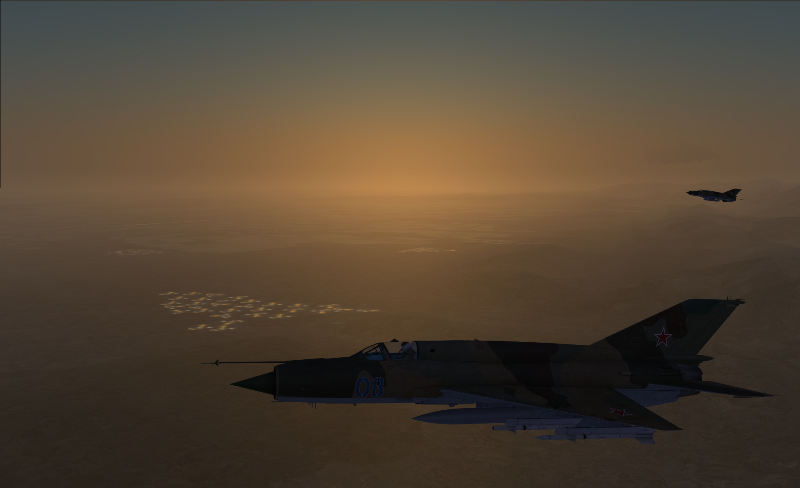 Discuss in the forums…