By Fred "HeinKill" Williams on September 2, 2014 in Books 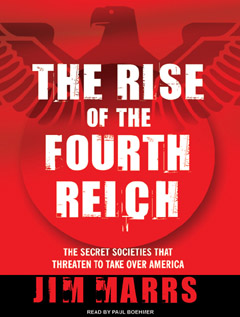 The publisher’s blurb says “Throw out everything you think you know about history. Close the approved textbooks, turn off the corporate mass media, and whatever you do, don’t believe anything you hear from the government — The Rise of the Fourth Reich reveals the truth about American power.”I suggest instead you suspend all disbelief and throw your brain into a tub of formaldehyde too if you are going to tackle this book, because that is the only way to get past the labyrinth of conspiracy theories built on myths and wild speculations that passes for ‘analysis’ in ‘Rise of the Fourth Reich‘.I’ll let the publisher’s blurb do the talking (with little observations from yours truly): “In this explosive new book, the legendary Jim Marrs, author of the underground bestseller Rule by Secrecy, reveals the frighteningly real possibility that today the United States is becoming the Fourth Reich, the continuation of an ideology thought to have been vanquished more than a half century ago.“This concept may seem absurd (H: yup, uhuh) to those who cannot see past the rose-colored spin, hype, and disinformation poured out daily by the media conglomerates—most of which are owned by the very same families and corporations who supported the Nazis before World War II. (H: Yup – as you can see from this long list of media moguls – case proven. NOT!) But as Marrs precisely explains, National Socialism never died, but rather its hideous philosophy is alive and active in modern America. Unfortunately, most people cannot understand the shadowy links between fascism and corporate power, the military, and our elected leaders (H: Um, could be because there aren’t any?).“While the United States helped defeat the Germans in World War II, we failed to defeat the Nazis. At the end of the war, ranking Nazis, along with their young and fanatical protégés, used the loot of Europe to create corporate front companies in many countries, including the United States of America (H: unfortunately, he fails to name one). Utilizing their stolen wealth, men with Nazi backgrounds and mentalities wormed their way into corporate America, slowly buying up and consolidating companies into giant multinational conglomerates (H: again, no examples). Many thousands of other Nazis came to the United States under classified programs such as Project Paperclip. They brought with them miraculous weapon technology that helped win the space race but they also brought their insidious Nazi philosophy within our borders. This ideology based on the authoritarian premise that the end justifies the means—including unprovoked wars of aggression and curtailment of individual liberties—has gained an iron hold in the “land of the free and the home of the brave.“For the first time Jim Marrs has gathered compelling evidence that an effort has been underway for the past sixty years to bring a form of National Socialism to modern America, creating in essence a modern empire — or ‘Fourth Reich!'”Don’t make my mistake and buy this book!You can browse the tome online here (but I suggest beforehand that you stick a screwdriver through your eye socket and twist it around. You’ll enjoy it more if you have a frontal lobotomy first):http://browseinside.harpercollins.com/index.aspx?isbn13=9780061245589 My rating: 0/5, and if it was mathematically possible: -5/5PS, if however you too think Nazis are running the American Government (and you somehow found out where I live) don’t come looking for me, I am (secretly) one of you.