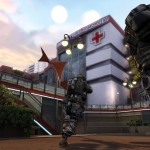 Take a look at the teaser trailer below along with some screen shots:

Discuss this on the forums….

Check out the full details at: http://aapg.americasarmy.com