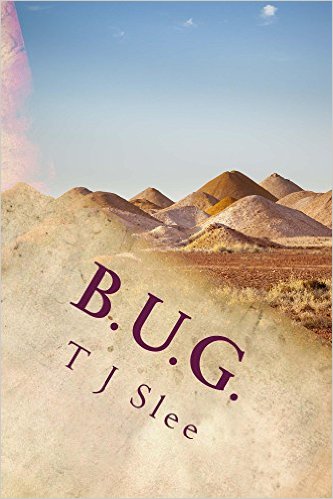 When it comes to good guys taking on the terrorists, do you turn to ‘Die Hard’, or are you more a James Bond fan?

If you answered ‘Die Hard’, ‘BUG’ is the book for you! What I love about the ‘Die Hard’ series is the John McLean character Bruce Willis plays, always in the wrong place, at the wrong time, finishing every movie chewed up and spat out, but ultimately victorious. And though it is Hollywood, you can convince yourself that a terrorist takedown could maybe actually happen that way (except for the crazy car and plane stunts of course).

Charlie Jones, the hero of this series, is an Aussie John McLane and the book is written with the same sort of light touch, and dark humour, as the Die Hard series. Not only that, it rips along, just like a Die Hard movie does. As SimHQ’er ‘Legend’ wrote on these forums: ‘…fun, dark humour, and a really fast-paced book. Scares me that this is probably closer to reality than many other spy stories.’

More about that gritty reality later…

B.U.G. is a thriller right out of the USA Today world news pages. The protagonist, an Australian Security Service officer called Charlie Jones, works in Middle East counter-terrorism in the Syrian and Iraqi communities. Jones’ discovers that a Kurdish refugee in Australia has intel on the whereabouts of a US Delta Force soldier who was captured in Syria and is still MIA. This sets off a race to secure him, between no less than the Australian security service, the US Defense Clandestine Service, Kurdish militia supporters and Turkish intelligence!

If there is one thing the story communicates well, it is that in counter-terrorism, the concept of ‘allies’ goes right out the window.

I LIKED: writing style, lots of dialogue moving the plot along, hard core central character, plenty of black humour. Price is right in the eBook sweet spot.
NOT SO MUCH: as Legend points out, there is a plot twist halfway through that’s quite funny, but not a ‘Life of Pi’ moment. Book is fine without it.
SCORE: 4/5 and I’ll be buying the next in the series when it hits Amazon.

Interview with the author: ‘TJ’

When I read the book blurb, I was a little intrigued, because I had never heard of the  Defense Clandestine Service. I thought it was a made up organisation, but no, it is a thing. They used to be the Defence Human Intelligence Service, which I’d never heard of either! But they are basically the covert operations arm of the US Defence Intelligency Agency (DIA).

I was interested to hear more about this and also just curious about why the author, clearly an Australian, had chosen to throw this little known agency into the plot. So I looked up TJ Slee on ‘Goodreads‘ and set up a text chat!

And I quickly learned why the book has that feeling of gritty realism about it, because I found out it was written by someone who has been there, done it and got the t-shirt…

Fred: Your author bios on Amazon and Goodreads say virtually nothing about you, except that you were born in New Guinea? Can you share a little more?
TJ: (Laughs) Sure, but then I’d have to, you know, kill you. No seriously I respect that there are some authors who like to talk about themselves, but I’m not one of them. I think the story is the interesting thing, not the story teller.

Fred: OK, let me be more direct then. I get the feeling that you must have worked as a ‘spook’, did you?
TJ: Yes, for eight years.

Fred: Is it based on real events?
TJ: No, I left the game before the Syrian conflict broke out, and I worked in a completely different target area. But I guess you could say although the players were different, the game is the same!

Fred: I get the impression reading ‘BUG’ that in counter-terrorism there are no allies, and all is fair in love and war?
TJ: Not just counter-terrorism, intelligence in general. Sure there are alliances – the ‘Five Eyes’ alliance of Australia, Canada, New Zealand, the United Kingdom, and the United States is a particularly strong one – but those alliances are all tempered by national interest and you can bet not a single one of those countries or their services hesitates to shaft the other when it is in their national interest.

Fred: Tell me about the US Defence Clandestine Service, I’ve never heard about it.
TJ: It’s no secret, but it’s kind of boutique. When US DIA set it up they had big ambitions but CIA killed those because they saw it stepping on their toes. The book is about the search for intel on a missing Delta Forces soldier, so DIA Clandestine Service was the logical agency to throw into that scenario.

Fred: Your book is focused very much on the role of ‘human sources’ as they are called, whereas a lot of thrillers these days are all about cyberwar, cyber-espionage, hi-tech digital intelligence gathering and so on. Deliberately?
TJ: Deliberately. You want to read a cyber-thriller, I’m not your author. I know virtually knothing about that stuff. I ran human sources. It’s as messy as hell. So my books are about that. I’d also argue that while technology has changed counter-terrorism beyond recognition, and while we have all sorts of high tech tools for passively collecting and analysing intel now, if you want to be able to penetrate a terrorist cell, monitor and disrupt it, nothing is better than a human source. But there are plenty who disagree.

Fred: You’re a ‘boots on the ground’ person.
TJ: Exactly! Sigint can take you so far (Fred: signals intelligence or digital eavesdropping) but it can’t ask questions on the fly, it can’t do someone a favour or change someone’s mind, and it can’t recruit other agents.

Fred: You don’t seem to take the subject too seriously. Your protagonist Charlie Jones is constantly screwing up, getting beat up, stabbed, shot, blown up and is the total opposite to James Bond when it comes to success with women.
TJ: Yeah, I guess Jones is based more on anti-heroes than super heroes. Most people who work out on the field ops side are not ninjas with special weapons implants – they’re pretty average guys and girls, with pretty average smarts, who screw up all the time but somehow get (expletive deleted) done! Jones is one of those.

Fred: I loved the Charlie Jones character. A total square peg. How did you come up with Jones?
TJ: It wasn’t hard. Jones is based on people I know. Intelligence officers are a pretty diverse bunch, they have to be. You want them to be. I just took some of that diversity, and rolled it into one character…

Fred: The reviews talk about ‘fearing for our safety’ if that is what counter-intelligence agents are really like.
TJ: It’s the opposite. You should fear a world full of James Bonds. Reality shows that the Charlie Joneses out there are doing a pretty damn good job of keeping you safe, even if the media seems to imply otherwise. For every attack you read about in the press, there are ten you never heard of that got stopped. Those are pretty good results but no one wants even one single attack to be successful, and any attack is a tragedy, I realise that.

Fred: This book is ‘volume I’ – are there more in the pipeline?
TJ: They’re already written. I set myself a ‘quarantine’ period where I wouldn’t publish, so that no one could accuse me of giving up state secrets. I’m comfortable that I can have fun with these books now without accidentally saying or doing anything stupid from that point of view. These stories reflect the reality, but they aren’t based on real events – not even close!

Fred: if Charlie Jones is ever played by an actor who would you want? Say Bruce Willis!
TJ: (Laughs) More like Charlize Theron, the Mad Max version.

Fred: You also write Fantasy? What’s up with that?
TJ: We all have our dark side.

Fred: So what is next? Charlie Jones goes to Iran?
TJ: The Vatican actually. Next one is called ‘Cloister’. I’ll roll out some teaser chapters soon and then the second volume around April. Did you know the Vatican has its own SWAT team? Crazy right? Then the third volume is called ‘Fissure’ and will come out this summer. Can I plug my Facebook page – if people want to read some ‘taster chapters’?

Fred: Plug away! And thanks for the intel…
TJ: Thanks yourself: http://www.facebook.com/teejayslee/

Fred: This interview will self destruct in ten….nine…eight…

Half Way Home and Hurricane, by Hugh Howey Book Reviews