After a conspicuous, and unfortunately unavoidable absence, SimHQ is returning to its regularly scheduled programming. So, let’s not waste any time and jump right back into the fray.

A lot has happened in the previous weeks, including one of the gaming industries largest, and arguably most popular, consumer/developer gatherings: E3. This year’s conferences weren’t exactly earth shattering, but it was exciting enough that the hype train is still making its way across the web.

Without a doubt, one of the most talked about games shown off at E3 (excuse me, EA Play) was Battlefield 1, EA/Dice’s flagship first person shooter. In a move that surprised more than a few people, it was revealed with a bombastic trailer back in May that Battlefield 1 would be returning to its roots. So, what can we expect from Battlefield 1, aside from the curious numerical setback?

Okay, let’s get this part out of the way first. Most of us aren’t going to play BF1 because of its story campaign; we’re going to play it because of the explosive multiplayer matches. However, BF1 will have a single player campaign, even if we don’t exactly know much about it at the moment.

We do know that Dice is focused on bringing to life some of the lesser known events in World War I, as well as the fact that we’ll be controlling multiple soldiers from the various armies spread out across the world. From the art direction alone, it’s clear that Dice is focused on representing the technological leaps of the area. Indeed, at first glance, the trailers for Battlefield 1 look almost steampunk’ish, but Dice has confirmed that the game is firmly set in the events of the real world. With that in mind, I’m sure we can expect Dice to do everything they can to imbue the events of World War I with as many explosions as possible.

Now onto the good stuff.

Battlefield 1’s multiplayer, as will be familiar to many, will feature four classes for players to control. Unsurprisingly, those four classes consist of: Assault, Medic, Scout, and Support – the franchises’ staples. Well, Medic may not be much of a staple anymore, ever since the role was combined with Assault, nevertheless, the class system should be incredibly easy to pick up and dive into once the game is out. What is a bit surprising, however, is the inclusion of two new classes: Tanker and Pilot. Naturally the Tanker class specializes in tank combat while pilots take to the skies in BF1’s various aerial vehicles. (I couldn’t find confirmed information on Melee weapons – other than the fact that they are going to be in the game. Also, it’s safe to assume that each class will be armed with a Pistol of some sort) 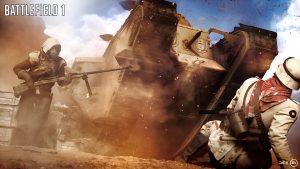 The two remaining “Vehicle” classes, Tanker and Pilot, are locked into their roles upon spawning inside an available vehicle – be it a tank or bi-plane. The reason for this change was to stop snipers from spawning into a vehicle then using it to propel themselves across the map quickly to a camping site. In other words: BF1 will make it “impossible” for players to waste valuable vehicles simply to gain a sniper perch (aka – dirty camping spot). However, Tankers and Pilots are reportedly able to exit vehicles and proceed on ground using their own unique loadout. (I couldn’t 100% confirm this info, but it seems legit)

Now, if you are running around the map as a Medic, for example, simply because you’re not a Tanker or Pilot doesn’t mean you can’t hop in and drive a random vehicle. However, you will not be able use perks, such as in-vehicle repairs, which are only available to Tankers and Pilots.

Oh, and yes, you can ride a horse in Battlefield 1.

Battlefield 1 will, of course, still feature giant 64-player maps. A Reddit user, who says they have sources at EA, has posted a list of the maps available at BF1’s launch. You can check the post out here, but I don’t want to talk about it much since there is no way to confirm the information.

Like Battlefield 4, environmental destruction will be front and center, with nearly all structures in the game featuring destructible pieces. Naturally, it will be possible to reduce many buildings to nothing but rubble during the course of a battle. It’s also a safe bet that BF1 will feature a system similar to BF4’s “Levolution” instances. During the conference at E3, Dice showed off the ability to completely bring down a zeppelin from the sky – it’s likely not the only instance of a map altering effect in the game.

Switching gears from gameplay to a more Quality of Life feature making its way into the franchise – it’s confirmed that BF1 will feature a “Persistent Squad” mechanic. This means that players will be able to form squads and stay together when moving from game-to-game and server-to-server.

Even though France and Russia will be making appearances in the game’s single player campaign, you’ll have to wait for the DLC to come out for Multiplayer support. Well, at least in the case of France, which is confirmed to be part of a “Premium” DLC release at a later date. While a Russian DLC pack hasn’t been confirmed, I’d say it’s a likely candidate.

EA Dice are going to be having a Closed Beta sometime this summer. In fact, there’s already a signup page available to visit, but other than that, no details have emerged. Oh, and you can sign up at Battlefield Insider for Early Access to the Open Beta – Yes, I did, indeed, just say “Early Access” to an “Open Beta.” It’s only a matter of time before we’re preordering games for Early Access to the Alpha Testing of a game’s prequel remastered remake.

As for the release date? Well, as long as it doesn’t get pushed back, EA Dice is planning to release Battlefield 1 worldwide on October 21, 2016.

Undoubtedly, more details will emerge in the coming months and changes to currently released information will be necessary – stay tuned to SimHQ for more news about Battlefield 1 and many other 2016 releases!