But do they work?

The problem, of course, is getting all this to actually Only Panther Games with its Command Ops series, NWS’s Steam and Iron, and AGSI’s Harpoon 3 have managed to crack this nut so far (with varying levels of success), at least among the wargames I’ve played.

The good news is that Missions do work and they work well in I actually found the challenge of creating effective Missions to be one of the highlights of CMANO, and almost a game within the game. This was also true of Harpoon 3, but its antediluvian interface sucked a lot of the fun right out of the process. Here, it’s a lot easier.

Don’t sweat the small stuff…well, most of it anyway

I found it intellectually rewarding (I believe that means “Fun”) to come up with Missions that would get a job done, and then watching my guys execute their orders to the best of their ability. The Friendly AI handles all the small stuff that would otherwise drive you nuts. Things like sensors and ECM behavior can be toggled for the entire mission, or you can go in and do it for each unit (all you OCD types can rejoice) via individual selection, or doing a drag-select for multiple units at once. You can also toggle Missions as Active or Inactive, which allows you to coordinate multiple missions to an extent.

About the only thing missing is the ability to start Missions at a certain time – a feature I’m not yet sophisticated enough to miss all that much. I expect they’ll eventually add this advanced feature in an update, as it does seem necessary for really exact planning and it seems like it would be a trivial modification of the existing code (as if I know what I’m talking about).

While powerful and flexible, you should understand that using the Mission Editor to create Missions is really an art which will take some time to master – typically through trial-and-error. There’s a deceptively large amount of power in the Mission Editor, even though it looks fairly simple at first.

Want a BARCAP where your guys stay “tight” and don’t go off chasing hares? You want your planes to sneak in low and fast, with total EMCON, then light ‘em up when they enter the patrol area? Need some orbiting tankers to gas up a strike as it comes home? Or whip together a team to prosecute a sonar contact? You can do all these things (and a lot more), and while I could go on with endless examples, I think you get the point (and I don’t want this part to turn into a gameplay tutorial).

Suffice to say, I was generally able to come up with a Mission that would handle the problem at hand – once I comprehended how the various switches and modifiers in the Mission Editor worked, and what sort of effect the Mission Type had on the behavior of the units assigned to that Mission. This is a well-thought-out system, created by guys who clearly played Harpoon 3 into the ground and knew what needed fixing.

A Land Strike showing some of the options used to tailor the Mission to your needs, including assigning escorts 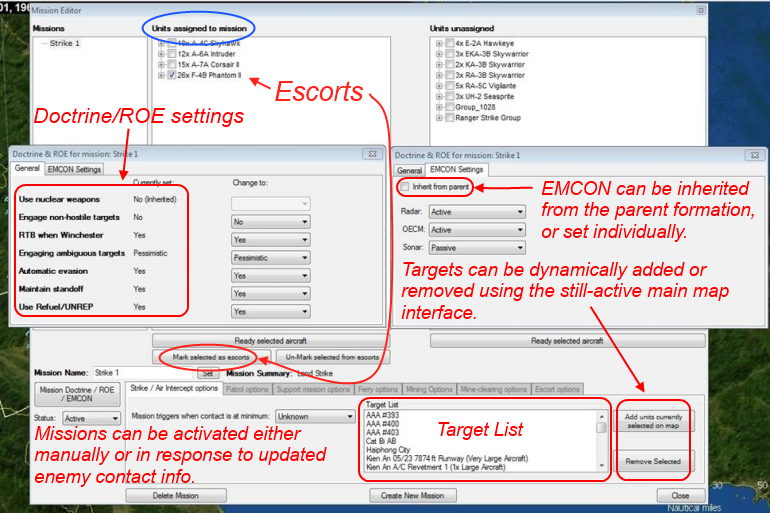 ASuW mission in progress. Area of a mission is shaded, and white lines indicate where my units are headed. 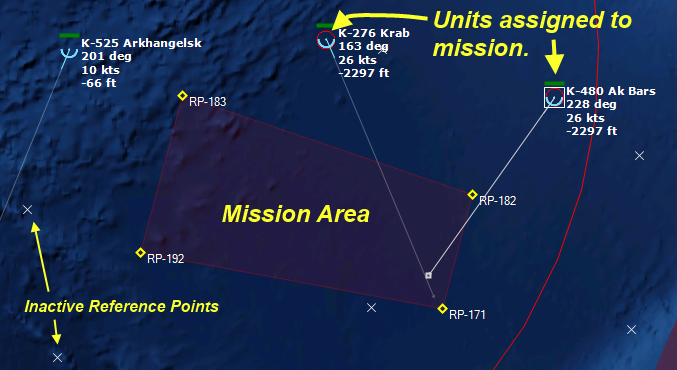 Manual override. I’ve elected to have sub “K-276 Krab” go under the layer on its approach… 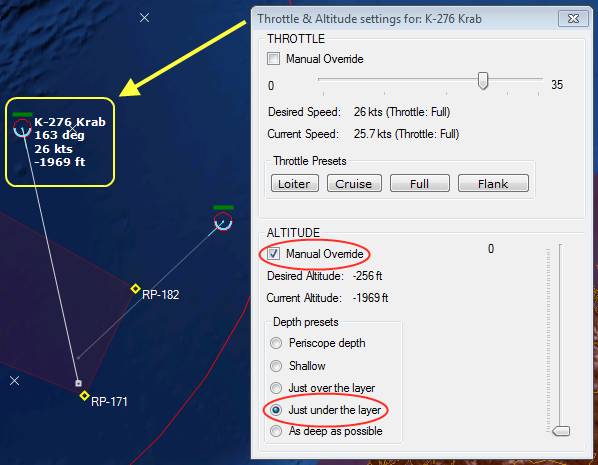 Enemy AI is good overall and definitely seems superior to the “bees-to-honey” mode that the Harpoon 3 AI seemed to always be in (and which made it easy to lure it into ambushes). The Enemy AI is tactically quite proficient, but at the Operational level it’s highly dependent on the skill of the scenario designer in creating effective Missions for the Enemy AI, along with appropriate scripted events.

At my moderate skill level, I believe I made more mistakes than the AI did in the games I played, so I was quite pleased with the level of competition on hand. But this may say more about me than anything else, and I’ve not spent enough time with the game to figure out if there are “Money Plays” which you can use to lure the AI into the same mistakes over and over again.

I’m sure they’ll keep fiddling with both the Enemy and Friendly AI, as some anomalous behavior has been reported on the forums. Overall, however, the competence displayed by the AI made more of an impression on me, as a mid-level player, than the occasional stupid mistake I’d see.

Overall, this was a pleasant surprise, and the Friendly AI in CMANO is especially impressive at times. AI quality was probably the thing I was most worried about with this game (other than its development time), as it was a weakness (IMHO) in Harpoon 3. While it seems notoriously difficult to program good AI in general, that’s been especially true for large/complex wargames like CMANO.

Watching a friendly AI frigate independently prosecute a sonar contact using proper doctrine, or seeing your SEAD patrol stay out of range and using their ARMs properly is really cool, and means that you can focus on commanding your units, rather than controllingIt’s not perfect yet, but real pilots and sailors aren’t either.

The Formation Editor: Leaner, but not necessarily meaner…

By moving these patrols onto the Main Map, rather than keeping them “inside” the Formation Editor (as in Harpoon 3), you can now see exactly where everyone is operating without going into the Formation Editor or switching the map view to show individual Units rather than Groups. I found this to be a more logical way of handling matters, and it’s also consonant with the apparent goal of keeping the game focused on Missions. In retrospect, having these things done via the Formation Editor in Harpoon 3 introduced an unnecessary duplication of interface effort, as well as moving the focus away from using the Missions to accomplish things like Patrols. Seen in this light, a Patrol is just another Mission and, in CMANO, is treated as such. The whole affair just seems better thought-out, even if some of the old Harpoon 3 functionality isn’t quite there yet.

Though I approve of the newly de-emphasized Formation Editor, CMANO is not quite “there” yet when it comes to duplicating all the things you could do with that tool in Harpoon 3. Two things I missed were 1) Automated handling of air patrols and 2) The ability to assign a patrol position in relation to an enemy unit.

Of the two, the latter is the one I miss the most, as I always thought it was really useful to have your units maintain an appropriate orientation in relation to an enemy unit, which was typically something like a base that wouldn’t be coming in and out of contact, and from which you expected trouble sooner or later.

New tools for a New game…

A new feature that I found very useful in CMANO was the Rotating Reference Point (RRP), which is like a regular reference point you’ve already seen me use to help define a Mission area, but these move in response to heading changes to maintain their position relative to a unit (friendly or not). This allows you to easily do things like set up your CAP, ASW or AEW patrols in positions which rotate in relation to your current course.

It’s by assigning units to Missions which use these RRP’s that you’re able to duplicate nearly all the functionality that was present in Harpoon 3’s Formation Editor, while still preserving CMANO’s consistent emphasis on Missions to get tasks accomplished. It’s a new way of doing business, but I liked it. People who have played a lot of Harpoon 3 may have some initial difficulty, but I suspect they’ll soon adapt just like I did.

Despite the many strong features that Command brings to the table, this is perhaps the strongest. All the annoying simplifications of earlier games have gone by the wayside, leaving us with the most realistic depiction of the complex physical interaction between weapons, sensors, ECM/ECCM and platforms that I’ve ever seen in a Civilian wargame at this Operational scale. The level of detail here is more like what we’re accustomed to seeing from tightly focused flight sims like DCS World, but applied to literally thousands of platforms.

A quick perusal of the database will awe you with the sheer amount of data this game is using. It’s not an understatement to say this is the most accurate, complete and concise assemblage of information on modern hardware I’ve ever seen. For a hardware nut like me, it’s pretty much a dream come true.

No more 360° radars or shooting missiles out your tailpipe at pursuers (my favorite bogus Harpoon tactic, btw) 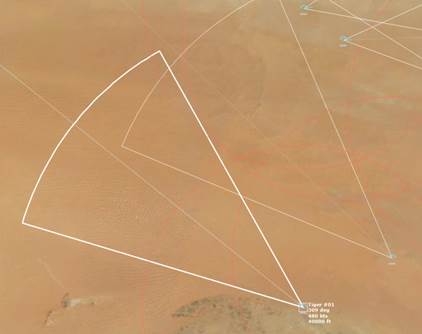 The database entries are, as you would expect from the guy(s) behind Harpoon 3’s excellent DB2000, accurate and laid out in an aesthetically pleasing manner that makes it easy to understand what each unit is packing. Missing from the database are things like pK (accuracy, basically) and some other performance data.

Frankly, these are not items which belong in a database accessible to players anyway. Those values are part of the game resolution engine itself, would not be available to a real commander, and anyway the Message Log already does a fantastic job (more on that later) of showing you exactly why your fancy AIM-120c somehow got spoofed by that early 70’s ECM pod – including all the pK’s, their modifiers and even the die roll which screwed you over.

Not every stat, just the ones you’d be in a position to know… 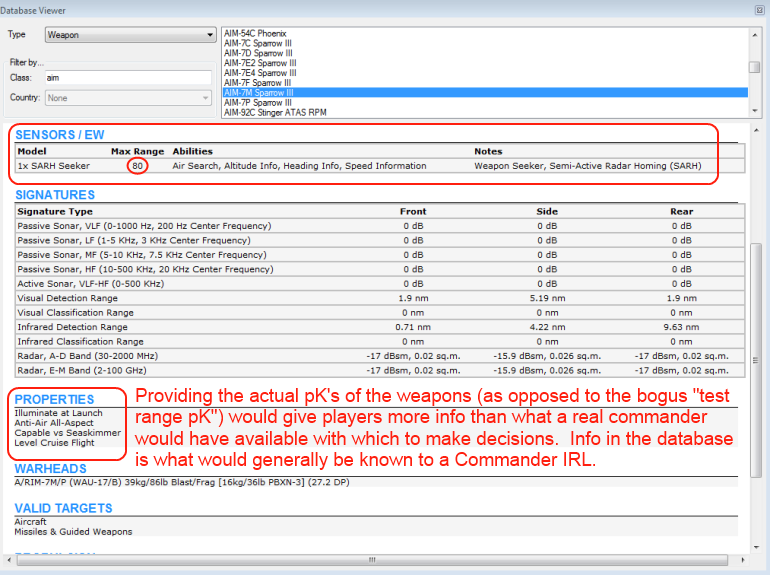 One small disappointment is that, while all the data is there, there are no text descriptions of the entries themselves, nor are there pictures for all of them (yet). However, a massive effort is currently underway and just before this went to press, a lot of the most common entries were given pictures, and I suspect that full descriptions will start coming in soon as well. The developers have left this to the community in a (likely wise) attempt to avoid copyright issues related to the various descriptions and photos. And it’s incredibly easy to add these things yourself, as I managed to do very quickly with a few of my favorite items (like the Kirov – because I’m a sucker for anything called a Nuclear Battlecruiser).

RKR Kirov database entry with an insane 5 pages of specs. Just look at that Beauty, will you? 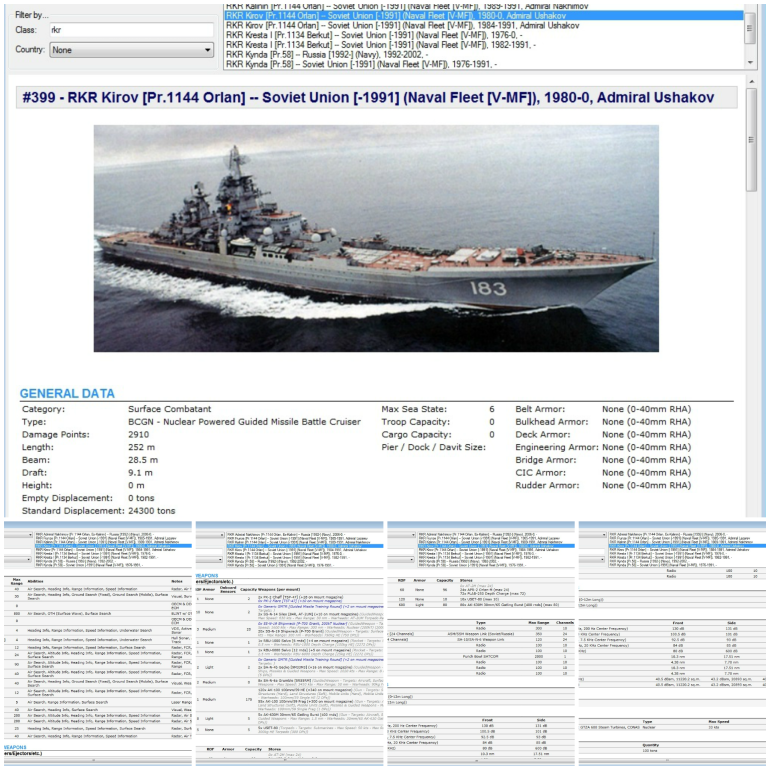